Pre-Order The Office: The Complete Series (Blu-ray) Available for Preorder 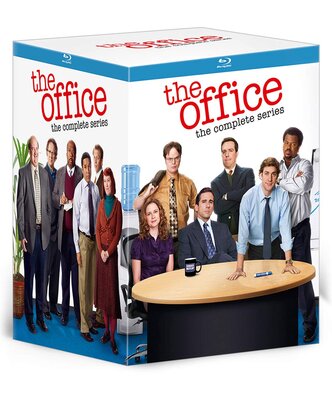 Here's hoping they just take the cheap way out and re-press season 9 as is and forget about that little moral panic edit they made.

I'm guessing the price will be down to the equivalent of about $10 per season before release date, which isn't bad at all.

The individual bluray releases of The Office was extremely troubled. Seasons 5, 7, and 9 were fine on bluray with no issues.

Fortunately I was lucky when I came across a season 6 bluray set, which sounded like the discs were "loose" when the sealed package was shaken slightly. When I opened it, the discs were not warped. (This was the only indicator I encountered, which suggested the discs were not clamped down tightly into the disc trays which caused warping).


The season 8 bluray set was even nastier. It was released as double-sided flipper discs, where each respective BD59 flipper disc had the bluray verson on sideA and the corresponding dvd version on sideB.


Lets hope the complete series set does not have any of these atrocities for the seasons 6 and 8 bluray sets.

The Obsolete Man said:
Here's hoping they just take the cheap way out and re-press season 9 as is and forget about that little moral panic edit they made.
Click to expand...

The middle ground would be to reauthor the disc with the blackface episode in question, by adding a short intro segment before the episode starts about the context. (Sorta similar to what streaming service hbo max did recently with "gone with the wind").

If they're really lazy and they don't want to reauthor anything, Universal can include a "bonus disc" dvd included with the set with a short documentary about the context of the blackface episode, and newer interviews with the cast.
A

Here's hoping they just take the cheap way out and re-press season 9 as is and forget about that little moral panic edit they made
Click to expand...

I really don't understand these comments. Streaming isn't the same as changing physical discs. How many times have DVDs/Blu Ray discs been changed for such things?
Reactions: Josh Steinberg

Subscription streaming of shows that have completed their first run is the 21st century equivalent to syndication. It’s long been common practice to drop episodes from syndication where the events portrayed in the episode don’t match the current sensibilities, since the reairing of this older material is considered by many to be an endorsement of the values contained within. There is also a long history of physical media packages including episodes that aren’t part of the syndication package because the audience is different and the context in which the content is being viewed is different.