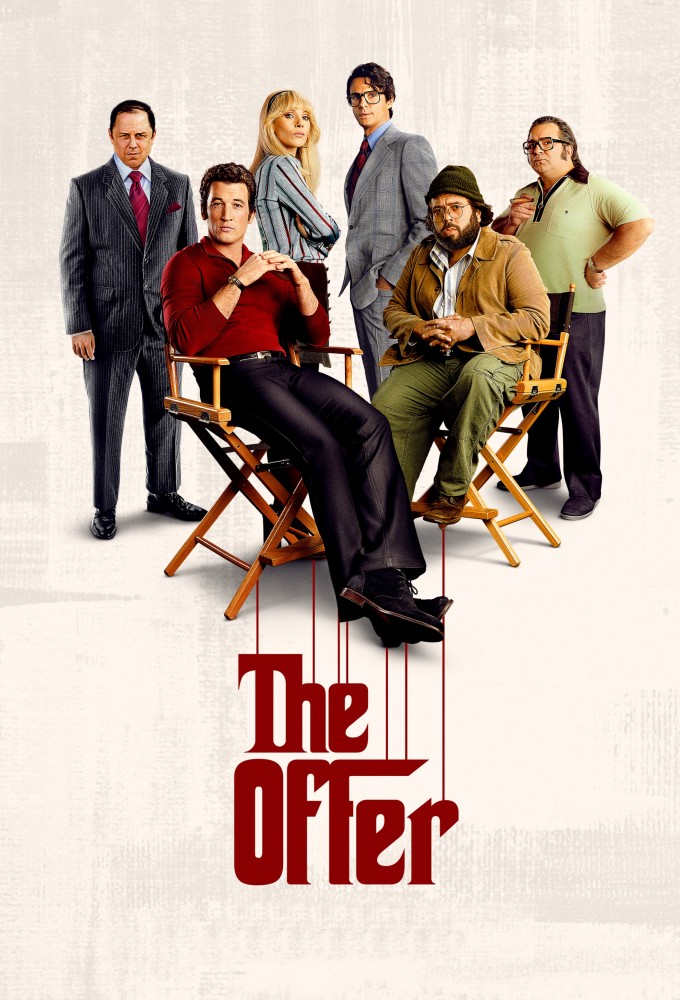 No thread on this? This is already out. Anyone has seen it?

Hell, I didn't even know about this series until now.

I had heard about it before but I don't remember where and when!

An old friend of mine, David Trachtenberg, edited four of the episodes.

Very enjoyable and easy to watch. And this was just the first episode, the story has not started yet.
I was so into the story that Francis Ford Coppola's name was erased from my head and when he showed up
I was surprised! Oh yeah he made it!

SamT said:
No thread on this? This is already out. Anyone has seen it?
Click to expand...

Stayed up until 2am this morning and watched the first 4 (out of 10) episodes. Up there with the very best series that I seen so far this year . If you love a story of Hollywood in the seventies then you will love this show. I couldn't fault anything in THE OFFER. Brilliant in every aspect-acting-directing- screenplay etc..Mostly about Paramount studios and the story behind THE GODFATHER book and eventual planning of making the movie. Gripping all the way. I will watch the 5th episode tonight.

Coppola: Vito Corleone is like King Lear, except he has sons instead of daughters. He is ...
Puzo: Did you eat my ham?

I'm up to episode 5. I'm really enjoying this min-series! I know that some liberties were taken with the facts, but if even half of it is true, it's proving to be a very well cast, well acted production.

Be sure to watch the extra behind the scenes short at the very end of each episode.

I'm watching an episode a week.

AMPAS had a special screening of Rosemary's Baby many years ago* and Robert Evans was there as a special guest and he participated in a salute to...himself. When Matthew Goode uttered his first lines in this series my reaction was immediately: "Nailed it!"

*I researched the date. Doesn't seem that long ago! It was May, 2008. "An Academy Salute to Robert Evans will feature a 40th anniversary screening of a brand new print of Rosemary’s Baby, and an onstage “conversation” with Viacom chairman Sumner Redstone, film director Brett Ratner, Velvet Revolver guitarist Slash (formerly of Guns N’ Roses), and Variety editor-in-chief Peter Bart – all “close friends” with producer and former Paramount head Robert Evans who will also participate.

I also recall that Arthur Hiller and Ali MacGraw were there.

I thought this was a nice little video.

We are loving this mini series. So amazed at the drama and craziness that took place getting this classic movie made!

Seriously it's getting annoying that they go out of their way not to show any reconstructed scenes. We need them even for few seconds and from behind the scenes. Not saying they should show the movie scenes from the camera's POV. Is this a copyright issue they are not showing anything?

I think it's that you can't improve on perfection!

Clark Green said:
We are loving this mini series. So amazed at the drama and craziness that took place getting this classic movie made!

If you’re not familiar with Coppola’s commentary on disc for the first film, and if you have access to it, I recommend you listen to it. A miracle the film turned out the way it did.

Reed Grele said:
I think it's that you can't improve on perfection!
Click to expand...

I think there are one or two most plausible explanations, and I’d agree with either.

The first is that they could be holding back recreations for the final episode(s) and show them when the series covers the editing process, or the film’s premiere.

The second is that it was a creative decision not to shatter the carefully constructed illusion created in telling the story of very famous people in a very famous film. It’s a reasonably assumption that the majority of viewers have seen the original film and know it pretty well. It’s one thing to have a young actor imitate Al Pacino or Marlon Brando on a recreation of a shooting day and to give glimpses of them preparing to perform, but it’s another thing to actually put an imitation of one of the most well known films of all time right in front of the audience. It winds up heading into whatever the analog equivalent of the “uncanny valley” is - we all know it’s fake and it just registers to an audience that way. I don’t think it really adds anything to the proceedings to show recreations of scenes we all know and potentially punctures the suspension of disbelief that a true life story like this requires. There’s a lot to lose by showing obviously fake recreations and very little to gain.

I suspect the latter explanation is the one but until all episodes air and/or someone from the production does an interview I don’t think anyone can authoritatively answer that question.

My brother-in-law is a ghost writer in Hollywood and told me a story about a scene ghost written for the Godfather by Robert Towne, the screenwriter who wrote Chinatown. David Fincher told him the story. It goes like this.

Chinatown was being seriously considered by Robert Evans, the head of Paramount. Evans was so impressed by the script he asked Towne to read the screenplay for the Godfather. Towne read it and loved it, but said a scene was missing. "It needs a scene between Vito and Michael before Vito dies."

Evans put Towne on a plane to NY. On the plane, Towne wrote the scene where Vito tells Michael he never apologized for his life, that whomever approaches Michael with a deal is the traitor.

In NY Coppola resisted Towne until he read the pages. Then he said, "This is fantastic. But it's not up to me. Brando didn't sign up to shoot this scene. Go sell it to Brando. If he says yes, we'll shoot it."

So Towne goes and knocks on Brando's trailer. Towne said he and Brando talked about a lot of stuff that had nothing to do with the Godfather before Brando agreed to read the scene. Towne was sure Brando would axe it. Later Brando called Towne back to his trailer and said, "I love it. I will agree to shoot the scene if Francis lets you direct it."

So not only did Towne write the scene, he directed it.

I can't imagine the movie without that scene.

I bring this up now because they have introduced Towne into the series and I am wondering if this will be mentioned. I doubt it, since it appears the company is moving on to Sicily in the next episode, but it's such a cool story I thought I would share it.

I listen to my brother-in-law tell ghost writing stories all the time and am constantly amazed at who wrote what scene in what movie, and the world never even knows it.

I asked my brother-in-law about this. He said the likely reason is they don't have the legal right to do so.
Last edited: Jun 4, 2022

Paramount wholly owns the film and the series is a Paramount production - doubtful that there is a ownership reason.
You must log in or register to reply here.