Liliana Cavani's The Night Porter is one of those films whose notorious reputation in no way reflects what’s really going on within the movie (unlike, say, Pier Paolo Pasolini’s Salò, or The 120 Days of Sodom whose infamous reputation is fully justified by its content). Pauline Kael called it “gothic porn,” but it’s actually neither of those things; rather, it’s an ambitious if ultimately flawed attempt to bring past and (then) present together in a psychosexual tale of perverse lust and need. There is some wonderful craft here even if the story itself penned in part by the director needed a thorough rewrite. 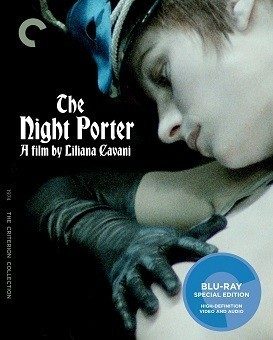 Into the Hotel Zur Oper in Vienna in 1957 comes an American orchestra conductor and his wife Lucia (Charlotte Rampling). It turns out she was as a teenager a concentration camp inmate involved in a sado-masochistic dalliance with the camp’s commandant Max (Dirk Bogarde), the same Max now the night clerk at this hotel. Though the war has been over for more than a decade, Max and his SS officer/survivors are haunted by thoughts of Nazi trials bringing them down and have gone about eliminating all evidence concerning their war crimes to prevent any threat of prosecution. But Max still prizes his memories of Lucia, and her own memories of those times makes the sexual lure of Max something she can’t fight. But Max knows Lucia will be in danger if his friends learn of her existence, so he does everything in his power to keep her presence a secret from them while the couple begins to renew their sexual relationship.Director Liliana Cavani co-wrote the script with Italo Moscati juxtaposing scenes set in 1957 with sequences which somewhat parallel events in the camp during the war. Curiously for a film whose tarnished reputation lies in its alleged graphic sexual sequences that some at the time thought rivalled Last Tango in Paris for explicitness (they don’t), it’s in the flashback scenes in the Nazi concentration camp that the film reaches its high points. Amid some of the nakedness and degradation, two moments especially stand out: Lucia performs a Marlene Dietrich-inspired song topless while weaving insinuatingly among the SS officers and invited guests at a private party, and earlier an SS officer named Bert (played by Amedeo Amodio who in the 1957-set scenes clearly has a homosexual attraction for Max) who had been a ballet dancer in private life before the war performs for his SS brethren a solo dance wearing only a dance belt which accentuates every muscle in his body pulsating in an amazingly athletic and bravura solo. The movie’s thin plot runs down rather quickly as Max and Lucia stay bottled up in his apartment vainly trying to escape his friends out to wipe her out, but the sexual servitude each of these damaged people inflict on one another could have been interestingly developed with a greater variety of locales and more tension instilled in the script as they attempt to prevent discovery.Dirk Bogarde took advantage of the more permissive 1970s to continue to essay a series of roles which left his debonair leading man image tucked far into the past. His Max is part lackey, part pimp, but the reintroduction of Lucia into his life shows us a more forceful and despotic side to his character, and he holds the screen marvelously throughout. Charlotte Rampling alternates between effervescence and zombie-like stiffness as Lucia relives disturbingly events from a past existence which she had thought was far behind her. She doesn’t quite plumb the depths of her character enough to allow us to understand her compulsions, but she’s so hauntingly and uniquely alluring that one is drawn to her presence even when her acting seems mechanical. Philippe Leroy, Gabriele Ferzetti, and Giuseppe Addobbati as three of Max’s fellow SS survivors make indelible impressions as they attempt to keep Max in check while as stated earlier Amedeo Amodio triumphs in two staged dances during the film. Nora Ricci is quite amusing as a nosy neighbor eager to find out what’s going on behind those doors at Max’s apartment.

The film’s theatrical aspect ratio of 1.85:1 is faithfully rendered in this 1080p transfer using the AVC codec. Sharpness is very good in the 1957 scenes while occasionally a bit softer in the concentration camp flashbacks; likewise, the color timing in the flashbacks desaturates the color a bit and adds a green tinge to suggest an earlier period. Color in the 1957 scenes is more vivid with reasonably lifelike skin tones (which occasionally go a shade too rosy). Black levels are only average for the run of the movie, and there’s a problematic hair that intrudes during one of the sex scenes (likely part of the original photography). The film has been divided into 19 chapters.

The PCM 1.0 (1.1 Mbps) sound mix is typical for its era with dubbed English voices for some of the Italian actors being quite noticeable. Dialogue, though, has been nicely recorded and mixes well with the sound effects and Daniele Paris’ brooding score. There's a brief excerpt from Mozart's The Magic Flute which also has very good fidelity for a mono transcription.

Women of the Resistance (49:56, HD): Liliana Cavani’s 1965 television documentary noting the bravery and sacrifice of Italian women working against the fascists during the Italian occupation in the later years of World War II. The director provides a 2014 introduction to the movie (4:55, HD)Liliana Cavani Interview (8:33, HD): a 2014 interview where the co-writer/director remembers the film’s production and expresses disgust at some of the censorship problems the film faced at the time.Enclosed Pamphlet: contains cast and crew lists, information on the audio and video transfers, a 1976 interview with the director published in Sight & Sound, and film scholar Gaetana Marrone’s overview of Liliana Cavani’s career and an analysis of The Night Porter.Timeline: can be pulled up from the menu or by pushing the red button on the remote. It shows you your progress on the disc and the title of the chapter you’re now in. Additionally, two other buttons on the remote can place or remove bookmarks if you decide to stop viewing before reaching the end of the film or want to mark specific places for later reference.

Not as interesting or as complex as Luchino Visconti’s The Damned (though with some of the same tone and themes and also starring Dirk Bogarde), Liliana Cavani’s The Night Porter looks far better on Criterion’s Blu-ray release than it ever appeared in the theater. The bonus features, while not plentiful by Criterion’s standards, certainly add interest to this package.