The cover of the DVD box set tells all you need to know about CBS’ new hit comedy The Millers: an exasperated son looks out from behind a shower curtain while his parents occupy the same bathroom, the father sitting with his pants down on the toilet and the mother casually brushing her teeth. There are other characters on the show, but that son-mother-father dynamic is what drives the series: a broad, loud, occasionally crass comedy that really doesn’t often live up to the talents of its lauded participants either before and behind the camera. 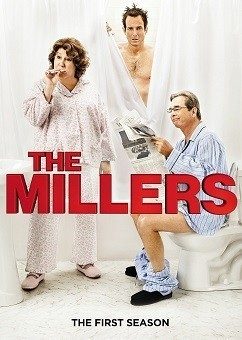 Puff piece Virginia TV news reporter Nathan Miller (Will Arnett) takes the opportunity of his parents’ surprise visit from South Carolina to announce to them that he has gotten a divorce. Father Tom (Beau Bridges), surprised that his son would opt out of a marriage of three years just to be happy, decides to opt out of his 43-year marriage to the autocratic, know-it-all Carol (Margo Maratindale) and then and there takes residence with Nathan’s vegan sister Debbie (Jayma Mays) and her husband Adam (Nelson Franklin) while Carol in turn moves in with Nathan. Thus, the first season of the show finds the parents and children of wildly differing sensibilities coping (usually badly) with the assorted strangeness of sharing time and living quarters with one another.Parents living with their children is certainly not new to 21st century television audiences, especially the hard-driving, domineering mother caricature that Margo Martindale plays here, and there is nothing in the writing or performance that puts any kind of fresh spin on such a tired comedy trope. (The writers also often dip into plotlines which feature a mother-son quarrel which works itself out into a warm hug and forgiveness by episode’s end which always brings an “awwww” from the studio audience). Beau Bridges’ Tom is also given a cartoon to enact: a once-brilliant engineer who now in late middle age can’t operate anything mechanical. With both Martindale and Bridges possessing Emmy-winning credentials, seeing them attempting to make something amusing from the steady stream of fart and sex jokes in episode after episode is particularly galling though Bridges’ innocence and naiveté is more appealing than Martindale’s loud, often obnoxious mother (think Everybody Loves Raymond’s Doris Roberts with a southern accent). J.B. Smoove completes the cast of regulars as Nathan’s best friend and cameraman Ray, but his contributions as the jive-talking, slick friend are more tiresome than rib-tickling..The series, however, isn’t a total loss. There are episodes that have a certain amount of fun embedded in the predictable plotlines. Carol’s penny-pinching ways that find the family having to scarf down an enormous serving of ice cream or her sneaky attempts to get back the $75 fee for canceling a dentist’s appointment offer some bright comic moments (much of it due to the staging by legendary Emmy-winning comedy director James Burroughs who helmed all the shows this season), and Debbie and Adam’s failing vegan and yoga restaurant and their unusual approaches to childrearing (their daughter Mikayla is played by Eve Moon in the first few episodes before being replaced by Lulu Wilson who is given a lot more to do even though she’s playing another tired stereotype: the precocious youngster smarter than everyone around her) add some liveliness to the proceedings. An episode with mother and son gaining information about the family by reading daughter Debbie’s diary makes for the show’s most consistent half hour of comedy.In fact, Jayma Mays and Nelson Franklin are so natural playing their roles that they’re like a breath of fresh air compared to the overdrawn cartoons (conceited Nathan, barracuda Carol, clueless Tom) surrounding them. The series also has a few interesting guest stars dropping by for underused cameos: Eliza Coupe as Nathan’s ex-wife and also Brandon Routh, Penny Wilson, June Squibb, Jerry Van Dyke, Roseanne Barr, Andy Richter, Tommy Chong, and Jeffrey Tambor. The series is filmed in front of a live audience (quite different from creator/producer Greg Garcia’s former big hit My Name Is Earl), but there is obvious audience sweetening on the track judging by the raucous laughter for jokes that aren’t funny, and it’s clear some of the actors in the cast consult cue cards during the taping with obvious, extended looks down instead of into the faces of the actors they’re speaking with. All of these issues should be addressed before the series begins its new season. (Yes, with television’s most popular comedy The Big Bang Theory as its lead-in, it’s no wonder The Millers was the highest rated new comedy this season.)Here are the twenty-three episodes contained on three DVDs that make up the first season of the show:1 – Pilot2 – Plot Twists3 – The Phone Upgrade4 – The Mother Is In5 – Giving the Bird6 – Stuff7 – The Talk8 – Internet Dating9 – You’re in Trouble10 – Carol’s Parents Are Coming to Town11 – Dear Diary (probably the best episode of the season)12 – Miller’s Mind13 – Driving Miss Crazy14 – Carol’s Surprise15 – You Betcha16 – Bahama Mama17 – Plus One18 – Walk-n-Wave19 – Cancellation Fee20 – Tomlandia21 – 007222 – Sex Ed Dolan23 – Mother’s Day

The widescreen television aspect ratio of 1.78:1 is faithfully presented in transfers which have been anamorphically enhanced for widescreen televisions. Sharpness is excellent for these standard definition transfers, but color is often a touch on the hot side with flesh tones that often look a bit orangey and unnatural. Black levels are very good, and apart from some minor aliasing, the images are pretty solid. Each episode has been divided into 5 chapters.

The disc offers both Dolby Digital 2.0 and 5.1 sound mixes for each episode. There is very little difference to be heard between the two mixes apart from the 2.0 stereo mix being a tad louder. The 5.1 mix really does nothing with the rear channels apart from the percussion riffs which punctuate the soundtrack between scenes. Otherwise, the dialogue, music, and raucous audience response all emanate from the front soundstage (and mainly the center speaker).

Audio Commentary: series creator Greg Garcia and his son Trace (who has a cameo in the episode) talk about the first episode in a commentary for “Pilot,” and they also discuss Trace’s experiences on the sets of his dad’s shows.Launch Promos (5:33, SD): six promos which aired on CBS prior to the show’s debut are offered in montage format.Season in Review: Year One (14:45, SD): creator Greg Garcia, director James Burrows, and all the regulars on the show discuss their roles and their first season of making the program.J.B. Smoove Walks the Streets (10:57, SD): the actor who plays Ray on the show conducts a tour of the studio where the program is produced.The Actor’s Actor: William Arnett (4:14, SD): Will Arnett improvises a condescending interview playing a cocky actor with his name.Gag Reel (6:58, SD)

The Millers had the great good fortune to be preceded by television’s most popular program insuring a decent sized audience for its first season. There are glimmers of good things in the writing and performance of the series, and one will be anxious to see if the changes which are suggested as coming in the season finale episode will generate a better, more consistent show for its second season.