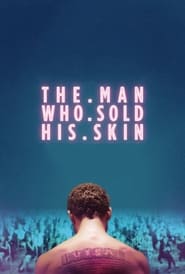 Title: The Man Who Sold His Skin

Plot: To be able to travel to Europe and find the love of his life, Sam Ali, a Syrian refugee, accepts to have his back tattooed by one of the most sulfurous contemporary artist; becoming that way a precious work of art.
Oscar Nominated for Best International feature (Writer-Director Kaouther Ben Hania is the first female Muslim to be so honored). Ben Hania was inspired by the true story of artist Wim Devoye's conceptual piece where a tattoo on a man (Tim Steiner; who has a bit part here) is the work of art. Tunisian Ben Hania has taken this kernel of an idea and transplanted it to Dictator Barshar al-Assad's Syria.

A young couple, Sam (Yahya Mahayni) and his fiancee Abeer (Dea Liane), get in trouble with the government for the offense of showing affection in public. Sam becomes a political refugee in Beirut Lebanon. There, he meets a famed artist Jeffrey Godefroi (Koen DeBouw) and his aggressive assistant Soraya (Monica Belluci). Sam becomes Jeffrey's Tim with his body literally becoming a canvas. Now, a living, breathing 'work of art', Sam is able to travel openly to the West. The irony isn't lost on anyone - Sam is now freer as a commodity than as a human being.

In some ways, Ben Hania's screenplay is similar to the tales of the poor and dispossessed selling body organs as a way out of poverty or some other dire situation. The difference here is that Sam is an educated man. He is fully aware of the dark absurdity of it all. At one point, he dares speak to his admirers where he sits as an exhibit, and is admonished that this line isn't to be crossed.

MAN WHO SOLD HIS SKIN may not be a deep exercise (it's symbolism is plain as day), but, what makes it sing is how well, and entertainingly, it is made. The romance between Sam and Abeer feels genuine and Mayayni and Liane are an intriguing pair of actors. SKIN was a very worthy nominee.

It's now on Hulu, Kanopy and Hoopla. And, streaming rental.
Movie information in first post provided by The Movie Database
You must log in or register to reply here.