The Man from U.N.C.L.E. Blu-ray Review

While no one may have been clamoring for a cinematic remake of the popular 1960s spy show, I became interested in seeing it when I heard that Director Guy Ritchie was attached. His cinematic style often feels like a modern take on 60s cool, and the decision to make the film a "period" 60s piece gives him ample room to play in his retro sandbox. The film was not a big box-office hit, possibly because of its proximity in release to Tom Cruise's global box-office smash Mission Impossible: Rogue Nation, but this home video release will give audiences a chance to see it outside the context of dueling 60s TV-derived espionage franchises and evaluate it on its own merits. 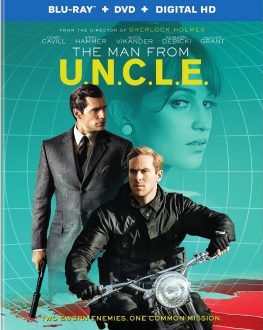 Standard sized Bl-ray case with hubs on both sides to accommodate two discs. Case is surrounded by a cardboard slipcover.

Set in 1962, The Man from U.N.C.L.E. finds American secret agent Napoleon Solo (Cavill) and rival Soviet Agent Ilya Kuryakin (Hammer) reluctantly paired together on a mission to prevent a technology for cheaply and efficiently enriching uranium from falling into the hands of a group of refugee Nazi sympathizers. Key to their mission is the cooperation of Gaby Teller (Vikander), the daughter of the scientist who developed the technology. Gaby's father is believed to be working, voluntarily or otherwise, with a group in Italy led by her Uncle Rudi (Groth) and shipping company owners Victoria (Debicki) and Alexander (Calvani) Vinceguerra. Solo, Kuryakin, and Teller must balance their natural distrust for each other and hidden agendas with the need for cooperation to infiltrate the Vinceguerras' organization and secure the technology before it can be used to create a nuclear warhead.

Guy Ritchie's approach to the material is light on its feet and heavy in its stylization. The end result is a fun and frothy mix of familiar spy movie tropes in a fresh looking package. The "retro modern" approach to the film's design and music presents the viewer with plenty of eye and ear candy. Viewers looking for something a bit deeper may dismiss the film as an exercise in style over substance, but I enjoyed the time spent with the just-short-of-over-the-top characters enough to welcome the idea of a continuation of the series suggested by the final scenes (and likely denied by its modest box-office performance).

While the characters work in the context of the film, fans of the TV show may be a bit disappointed in the film's take on Russian spy Ilya Kuryakin. In the 60s version, one of the defining characteristics of Kuryakin as played by David McCallum was his mysterious past about which he was always quite coy and withholding. For the film version, Armie Hammer's Kuryakin is saddled with a back story involving a disgraced father that provides leverage for a couple of plot elements, but also makes him a bit of a standard-issue character.

The AVC encoded 1080p presentation is letterboxed to the film' original theatrical aspect ratio of 2.4:1. The bright and colorful cinematography complements the film's meticulous production design and retro modern aesthetic. This results in a very satisfying viewing experience whether escorting the viewer through the shadowy streets of East Berlin at night or the bright daylight Italian exteriors. Detail is excellent and digital artifacts are negligible.

The film's theatrical soundtrack is presented courtesy of a Dolby Atmos surround mix encoded into a Dolby TrueHD 7.1 track. Listening to it in a downmixed 5.1 form, I was surprised how infrequent directional effects were employed in the soundtrack. Aside from that quibble, fidelity was excellent, and the lossless encoding really benefitted the film's soundtrack with a mix of score and well chosen pop music that keeps things moving in typical Guy Ritchie fashion.

For an assessment of the track played through a Dolby Atmos home system, I turn the review over to Adam Gregorich:

Dolby Atmos: I watched this in Dolby Atmos using a 7.2.4 system configuration. While there were some directional effects that were well placed in the overhead channels (elevated train, helicopter, thunder and rain), there were just as many opportunities for placement that were missed. This is the most anemic Dolby Atmos Blu-ray release I have heard to date for overall overhead channel use. -- Adam Gregorich

When the disc is first played, the viewer is greeted with the following two skippable promos:

The proper special features are accessible from the disc's menu

Métisse Motorcycles: Proper and very British (4:49) is a featurette for the bike lovers in the audience in which Armie Hammer visits with Métisse Motorcycles Ltd. Owner Gerry Lisi in his shop. They discuss the bikes in the film as well as the history of the company before taking a custom bike for a ride. In addition to Hammer and Lisi, comments are also provided by Stunt Rider Lee Morrison.

The Guys from U.N.C.L.E. (4:57) focuses on the film's two lead characters and some of the stunts performed by the actors. Comments are heard from Wigram, Ritchie, Cavill, Jared Harris (Sanders), Hammer, Vikander, Calvani, Tuohy, and Jennings.

A Man Of Extraordinary Talents (3:16) focuses on Director Ritchie , some of his outside interests, and his on-set approach to film-making. Comments are provided by Cavill, Hammer, Producer Steve Clark Hall, Calvani, Grant, Debicki, Wigram, Vikander,

U.N.C.L.E. On-Set Spy is a collection of odds ends ends consisting mostly of behind the scenes production footage of amusing or interesting on-set occurrences. Content is as follows:

The Man from U.N.C.L.E. is stylized fun that blends a retro-modern aesthetic with familiar spy movie tropes. It may not persist in the viewer's memories much beyond the weekend after they watch it, but it will almost certainly entertain them for the whole time it is playing. It is presented with excellent video and a Dolby Atmos audio track that is surprisingly conservative in its use of the surround sound field while still offering outstanding fidelity to its front-hemisphere-focused mix. Extras are only a slight notch above standard electronic press kit fare due to some interesting but brief behind the scenes insights.

I thought the film was an overlooked gem this past summer, and am glad to see it get a good review here. The movie is the kind of fun the James Bond pictures used to be.
You must log in or register to reply here.