Like the slowly wilting flowers accompanying the opening credits sequence, Terence Davies’ The Long Day Closes is in part a meditation on the things that pass or have passed. A lyrical, impressionistic look at life for a young Boy in post-war Liverpool England. Despite a warm and close relationship with his mother, the young boy contends with conflict and remoteness. Teased by schoolmates, conflicted by homosexual thoughts and the guilt driven by his Catholic attendance, he is alone even within his busy home. 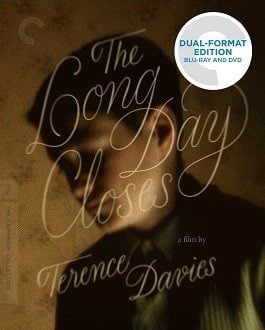 In post-war Liverpool, young Bud finds solace in the movies as he escapes the drab life of northwest England overrun with a murky brown and grey aesthetic. He lives with his sweet mother and older siblings, who are much older than he. He doesn’t quite fit in at school, he seems alone in his full house, an outsider watching the world around him, shuffled by its movement, timorous from what he can’t quite connect to.Director Terence Davies has crafted something very special in The Long Day Closes. The experiences of a young catholic boy living in post-war England in a working-class home without a father, or some close variation, has been explored quite often, at least on British television, but this film is utterly unique and a singular experience. A mosaic of memories, connected only by the perspective of Bud in the film, coalesce to create an atmosphere. Moments come and go, slices of memories are reenacted and time is not always linear, yet we sense the world Davies is letting us into.The impressionistic qualities that mark The Long Day Closes are not that of an unfocused narrative but rather a non-traditional narrative structure inclined to tell its story through a mosaic of traditional scenes, fanciful diversions, and audio clips from classic films (of the era) that are layered along with a brilliant use of music from the day. And Davies clearly has a command of the film he is making. An autobiographical filmmaker at work with a deeply personal resonance with the material. In less assured hands, The Long Day Closes might flutter and flail in the composite narrative, or worse, invite derision for pretense, but Davies weaves this tale with knowing and confidence – the hand of a gifted filmmaker exploring a subject obviously close to his heart.Davies centers the camera on young Bud, portrayed by one time actor Leigh McCormack, and even when not trained upon him, what we witness is about, from, or for him. He is a lonely boy, an outsider to the rest of the world even when he’s a participant – such as his time in the classroom or playing outside as his family gathers for sandwiches on the front step. His mother, played by Marjorie Yates, is a constant for Bud; a symbol of warmth and loving in his life. It’s clear he adores her and she represents the joy in his life. And yet there is another layer in Closes, that of a gay filmmaker reflecting, or dissecting, moments of realization and the associated shame (born from the conservative era of British life) that come from homosexual thoughts and feelings. A telling moment, quite early in the film, is of Bud watching with some fascination a shirtless bricklayer across the street. When his gaze is caught by the worker, Bud’s eyes slink away, and he is unsettled. In other scenes he is taunted at school as the word ‘fruit’ is levied.But like all elements of this film, Bud’s sexuality is not necessarily the central vein of the film and, though we can draw from his burgeoning homosexual feelings and rapt guilt a line to his frequent isolation, it exists as another memory born upon the celluloid. Davies does not ascribe Bud’s remoteness with the oppressive nature of British society towards gays at that time, nor does he posit any resentment, he simply presents Bud, assembled from these slices of different memories, for us to see him during a relatively slight, yet formative, period of his life.The Long Day Closes gives us an almost abstract glimpse into the direness of a poor Liverpudlian life in the 1950s, in a dreamlike painting of a film comfortably easing between reality and fantasy, with the fantasy never far away and reality never quite as raw as life can actually be. It is all filtered through the distant memories of the filmmaker and, in that regard, could not be more, real, fantastic, beautiful, sad, or lasting.

Criterion present The Long Day Closes in its original 1.85:1 aspect ratio, with a new digital transfer created in 2K resolution from the original 35mm interpositive. Director Terence Davies supervised the transfer, along with the film’s director of photography (DoP) Michael Coulter.The transfer is glorious. The look of the film, designed by Director Davies and DoP Coulter, accentuates contrasts, explores deep colors during moments of trouble for the lead character, and bathes generously in light a number of scenes. These techniques are reproduced with great detail and faithfulness on this high definition release. A rich film grain texture stands out, with no digital nuisances or other interferences noticeable. The color palette of the film is replete with browns and greys, fitting of the time and place, and are presented with high clarity.

The English LPCM 2.0 audio track is surprisingly full. The many songs from the spellbinding soundtrack that features the silky voice of Nat King Cole, Doris Day, Debbie Reynolds and others, are warm and full-bodied. Dialogue is crisp and there is a nice clarity from all corners of the audio.The original stereo soundtrack was remastered, according to the accompanying booklet, at 24-bit from the original 35mm negative tracks. Carefully attended to remove clicks, thumps and other audio artifacts, the result is highly pleasing.English subtitles have been provided for those that may have issue understanding the Liverpool accents.

Audio Commentary by Terence Davies and Michael Coulter: Recorded in 2007, the commentary is marked by periods of silence as the director and the DoP take in the scenes. There are valuable insights shared and discussion on the creative process is quite something.Episode of the British Television Series The South Bank Show: I was never a fan of The South Bank Show growing up in England. Too young at the time, it would seem to appreciate what this show offered. Host Melvyn Bragg offers excellent questions and thus this piece serves as a more satisfying behind the scenes discussion than one typically finds.New Interviews:Executive Producer Colin MacCabe (13:53): Former head of the British Film Institute, MacCabe discussing first coming across the work of Terence Davies, speaking very highly of Davies’ talents, and his pursuit of telling British stories when he became head of the BFI. Detailing how The Long Day Closes was funded and distributed is quite fascinating.Production Designer Christopher Hobbs (20:27): An interesting discussion on creating the sets and accomplishing certain shots in the film. Hobbs remains enthusiastic about his craft and recalls his work on the film fondly.TrailerDVD Version of the film14-Page Booklet: Featuring an essay by critic Michael Koresky

Terence Davies is a highly regarded British filmmaker. The Long Day Closes, just his second feature film, leaves a lasting impression. The opening moments of the film, following the title credits sequences, allows the camera to drift slowly down a decaying street pelted by torrential rain, under the soothing, almost echoing sounds of Nat King Cole. The camera turns to a near-derelict stairway inside of long-forgotten home, before it fades into the past where the 11-year old Bud is sitting on the stairs. Immediately this film has provided an aching sense of passing.A study of both sadness and joy, reflections on the impact certain moments in our lives have upon us, Terence Davies has fashioned something quite special. Inexplicable slices of our lives that shape and mold us, echoing in our world as adults. There’s a wonderful and haunting sentiment in that notion. We are all affected by moments in our lives and those moments can be small, throwaway or insignificant to anyone else but us. And that is what has been captured with mesmerizing beauty in The Long Day Closes.Highly Recommended!

Beautiful, perceptive review of a glorious film.
BUY, fellow HTF members, BUY. This is a film not to be missed. I saw it once, when it opened, and have never been able to forget its impact on me. That's what I call art: a feeling, an image that I can still savor in my mind so many years later.

A great film which i had only had a vhs copy for a long time untill i purchased the BFI region 2 dvd release which looked very good. Now i will add the Criterion blu-ray to my library soon.

Words fail to describe how this film is so much more than a film to many of us, but you did a great job in just a few paragraphs.

Cheers!
You must log in or register to reply here.