The Little Mermaid: Return to the Sea/Ariel's Beginning Blu-ray Review

Disney’s various animation studios have churned out a number of made-for-home video sequels to its classic films, and some have been so popular that they’ve even produced multiple sequels: Cinderella, The Lion King, and Aladdin each have had two sequels and so does The Little Mermaid. Truth to tell, in this latest Blu-ray release, the films Return to the Sea and Ariel’s Beginning amount to a prequel and a sequel, neither without merit but both rather generic and unsurprising. Naturally, youngsters who long to see more of their favorites will be delighted with these lesser efforts and won’t likely pay much attention to the cruder animation and a lack of quality story craftsmanship. 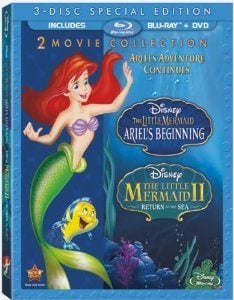 Return to the Sea – 2.5/5Everyone on land and sea celebrates the birth of daughter Melody (Tara Charendoff) to Ariel (Jodi Benson) and Eric (Rob Paulsen), but when the evil Morgana (Pat Carroll) intrudes, insulted she wasn’t invited to the celebration, she threatens the young child which forces King Triton (Kenneth Mars) to throw out a dragnet for her and Morgana to escape to the Antarctic waters. For twelve years, Ariel and Eric do everything possible to protect their daughter from any potential attacks, but Melody feels a helpless longing to be part of the sea, and Morgana uses this lure to change Melody temporarily to become a mermaid and bargains with her to permanently change her if she’ll steal Triton’s trident and bring it to her.Elizabeth Andersen and Temple Mathews have written a script that seems rather ironic: Ariel’s greatest wish was always to be a land dweller and now her daughter only longs to be part of the sea world. Rather than Ariel’s having learned her own lesson and imparting it to her daughter, Ariel allows her daughter to make the same mistakes of going against her parents and operating on her own with disastrous consequences. Trodding basically the same ground as the original film isn’t a smart idea and is made even less intelligent with the addition of bland songs by Michael and Patty Silversher even if the lavish opening “Here on the Land and Sea” brings both worlds together quite wonderfully. The couple of new pals for Melody – a penguin named Tip (Max Casella) and a walrus named Dash (Stephen Furst) – certainly can’t compare to Ariel’s pals from the original movie. All of the major voices from the original have returned for this sequel (including Pat Carroll voicing Ursula’s sister Morgana but without much vocal difference between the two) and are welcome, but the animation's crudeness compared to the original work just can’t be overlooked.Ariel’s Beginning – 3/5In this prequel to the original film, King Triton (Jim Cummings) is so heartbroken by the death of his wife Athena (Lorelei Hill Butters) at the hands of pirates that he forbids any music in his kingdom, and life for his six daughters becomes a regimented bore under the hand of severe governess Marina Del Rey (Sally Field). Marina wants more than anything to become Triton’s chief of staff and thus hold decision-making powers within the kingdom, a job now held by Sebastian (Samuel E. Wright). But music lives within Ariel, and when she sneaks away from the palace one night and discovers the Catfish Club which under the direction of Sebastian plays a heady mix of calypso and jazz tunes, she’s enchanted and brings her sisters along the next evening. But Marina discovers what her charges are up to and sees this as her way of discrediting Sebastian in Triton’s eyes and thus gaining power for herself.The prequel is a livelier, more involving film than its sequel predecessor. The music by Jeanine Tesori is better (Sebastian’s samba-fused “Shake, Senora” is toe-tapping fun, and “I Remember” is a touching ballad when Ariel regains her singing voice), and while no one’s life is really on the line here as in the earlier effort, the number of characters with their differing views on before-and-after Atlantica makes for a more interesting drama overall. The familiar characters (most voiced by their original actors where possible) are all welcome, and new villainess Marina gets a delicious interpretation by Sally Field. Her assistant, a mild-mannered sea cow named Benjamin, a nice variation from the usual wicked henchman, is sweetly voiced by Jeff Bennett. The animation this time out also seems much closer to the original’s look than the prior sequel even though it’s always clear the budget for this effort is far removed from the original’s cost.

The first meeting of Ariel and Flounder

Both films have a DTS-HD Master Audio 5.1 sound mixes. Return to the Sea has the more active of the two mixes with impressive and effective directionalized dialogue, stronger bass, and more effects activity spread through the surround channels. Ariel’s Beginning is less sonically complex even though it does boast excellent orchestral spread into the surround channels during the musical numbers.

Return to the Sea Storybook (10:09, SD): Jodi Benson narrates the telling of the plot of Return to the Sea done as a storybook.Deleted Song (1:54, SD): Pat Carroll as Morgana sings “Gonna Get My Wish.”Merbabies (8:36, SD): 1938 Silly Symphony animated short subject.Splashdance: A Dancer’s Adventures Under the Sea (7:23, SD): director Peggy Holmes, a dancer-actress, relates how she came to be the director of the film Ariel's Beginning. This also features behind-the-scenes looks at the actors recording their roles and the director working on character movements for the animators. Jodi Benson and Samuel E. Wright also weigh in on their feelings about the movie.Deleted Scenes (5:47, SD): Peggy Holmes introduces the two deleted scenes and explains why their were excised. They may be viewed individually or in montage form.Sing Along With Ariel’s Beginning: turns on the subtitled song lyrics when musical numbers occur.Promo Trailers: The Jungle Book, Frozen, The Pirate FairyDVD Copies: both films on separate discs enclosed in the case

Purely for those who can’t get enough of the lovable characters from the original classic The Little Mermaid, Return to the Sea/Ariel’s Beginning will likely delight small children who won’t mind the much less impressive animation, song scores, and stories. This double feature on Blu-ray is certainly a convenient way to have both movies in easy reach for those who are interested.