After glimmers of a change at Disney Animation surfaced with the entertaining Oliver and Company and The Great Mouse Detective, the full flowering of Disney’s animation renaissance is indelibly showcased with 1989’s The Little Mermaid. An exquisitely drawn animated musical, The Little Mermaid returned enchantment and awe to the art of the animated feature, and Disney has never looked back. The film still plays like a dream with its toe-tapping music and an involving story of a wish fulfilled, and with it now available in 3D, some of the musical numbers are definitely enhanced though, for the most part, the adding of a third dimension doesn’t have quite the same dramatic effect on the storytelling that it did with Disney’s follow-up musical Beauty and the Beast. 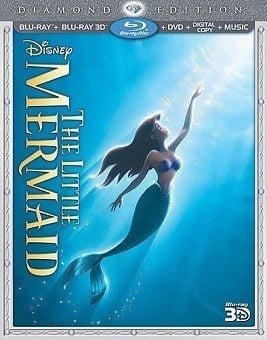 keep case with leaves inside a slipcover

Sixteen-year old Ariel (Jodi Benson) is the young mermaid daughter of King Triton (Kenneth Mars), ruler of the seas, but she’s more than a little curious about the human world floating right above her. During a particularly violent storm at sea, she rescues Prince Eric (Christopher Daniel Barnes) and falls instantly in love with him. But in order to become his wife, she must shed her tail and acquire legs. To do that, she visits sea witch Ursula (Pat Carroll) who tricks her into signing a document granting her legs in exchange for her voice with the proviso that she has only three days to make the prince fall in love and kiss her. If she fails, she becomes a desiccated member of Ursula’s prison lair. Without her voice to identify to Eric that it was she who rescued him, Ariel is dependent on her friends Sebastian (Samuel E. Wright), Flounder (Jason Marin), and Scuttle (Buddy Hackett) to help her achieve her heart’s desire and prevent Ursula from taking over the sea.Hans Christian Andersen’s fairy tale has been Disneyfied with the addition of Ariel’s singing sea buddies and the change of ending, but as with the best of Disney’s animated features, the protagonists go through daunting trials and tribulations against often frightening antagonists before the end arrives. Along the way is the absolutely first-rate musical score by composer Alan Menken and lyricist Howard Ashman which gives the film its greatest distinction. Though some of Disney’s previous fairy tales were full scale musicals, the score for The Little Mermaid is of Broadway quality with intricate rhythms and lyrics so fresh, witty, and spot-on that the cumulative effect of the brilliant animation (some of the best and most colorful Disney had turned out in decades), the involving story, and the superb music is an overwhelming one. “Under the Sea” is the first of many eye-popping production numbers to come in the Disney animated musicals, its reggae-rhythm infectious to the point of lifting one out of his seat and onto his feet to dance around the room. Both Ariel and Ursula have their songs of yearning: Ariel’s lovely “Part of Your World” and Ursula’s snaky “Poor Unfortunate Souls.” Ship’s cook Louis (Rene Auberjonois) sings his menu plans in “Les Poissons” which suspiciously seems more like a dry run for “Be Our Guest” in the next Disney musical, but “Kiss the Girl” sets up a lovely calypso-style ballad animated against a hilarious array of comic sight gags. This song is a perfect encapsulation of the new Disney mantra for these musicals: beautiful and heartfelt but never sacrificing a sense of fun for mere sentimentality.The voice casting is exquisite. Jodi Benson exudes the adolescent fervor of the youthful Ariel, and her handling of “Part of Your World” is boundlessly joyful and filled with the hopes and dreams of the young. Pat Carroll more than earns her place among the great Disney villainesses as the scheming, creepy (in more ways than one) Ursula. Samuel E. Wright as the crab Sebastian gets the film’s two most bracing numbers “Under the Sea” and “Kiss the Girl” and also offers a comic touch as Ariel’s (mostly ignored) voice of reason. Buddy Hackett as the scatterbrained seagull Scuttle wears a little thin by the end, but he’s a basically harmless distraction, and Jason Marin makes a sweet little companion for Ariel as Flounder. Kenneth Mars has great authority as King Triton while Paddi Edwards effectively voices the evil moray eels Flotsam and Jetsam who carry out their mistress Ursula’s bidding.

The film has been framed at 1.78:1 and is presented in 1080p using the AVC codec. The image is pristine and features unparalleled sharpness and rich, deeply saturated color. The clarity also allows the viewer to marvel at the special effects used to simulate the undulating water in the underwater sequences. There is no banding or any other distracting artifacts to mar the visual presentation. The film has been divided into 27 chapters.While the 3D conversion has been carefully applied to the original 2D animation, the resultant effect isn’t an overwhelming one. Depth and creative use of object placement is most visible in the “Under the Sea” and “Kiss the Girl” production numbers and in the typhoon sequence early in the film. Ursula’s later rampage is curiously not as effective in three dimensions as one might have suspected it would be. While there are no forward projections, one notices constantly that had the film been originally animated with 3D in mind, a number of stunning uses of forward projection (including bubbles, King Triton’s trident, Ursula's tentacles, and certainly the climactic confrontation between Ursula and Eric) could have been effected. There is no crosstalk in the film proper though I saw quite disturbing amounts of it in the main menu which certainly gave me pause before starting the movie.

The DTS-HD Master Audio 7.1 sound mix uses the wide soundfield to maximum advantage with this musical adventure. There are numerous instances of split sound effects which are placed in the fronts and rears and which occasionally pan through the soundstage with expressive use of the LFE channel on several occasions. The wonderful orchestrations for Alan Menken’s tuneful score place varying instruments in their own part of the audio field for a terrific sense of immersion into the music. Dialogue has been masterfully recorded and has been placed in the center channel.

3D DiscFrozen Theatrical Trailer (1:37, 3D/HD)2D DiscAudio Commentary: directors John Musker and Ron Clements and composer Alan Menken (with recorded thoughts from lyricist/producer Howard Ashman) have a jaunty discussion of putting the film together.“Part of Your World” Music Video (3:39, HD): Carly Rae Jepsen performs the song.@DisneyAnimation (10:45, HD): several young animators now working at the studio describe their thrill of meeting people associated with The Little Mermaid still working at the studio.Disney Intermission (15:35, HD): five different songs from the score appear in colorful karaoke renditions when pause is pressed (this feature may be turned off in the main menu). The karaoke is also available in the bonus menu in montage form.Deleted Character (2:05, HD): directors John Musker and Ron Clements describe and show Harold the Merman who was cut from the film.Under the Scene (13:13, HD): the live action reference material shot for the animators to refer to is shown in behind-the-scenes views of Sheri Stoner and Joel Finkel who were the live action models for Ariel and Eric.Howard’s Lecture (16:27, HD): excerpts from lyricist Howard Ashman’s noontime lecture to the animators about the art of making a musical are shown, introduced by directors John Musker and Ron Clements.Part of Her World: Jodi Benson’s Voyage to New Fantasyland (4:45, HD): the film’s star describes the importance of bringing her children to experience the New Fantasyland at Walt Disney World.John and Ron Make Caricatures (1:05, HD): the film’s directors John Musker and Ron Clements draw caricatures of one another.Animators Comment (1:42, HD): several of the film’s animators comment on the characters they drew/supervised for the film.Handshake (0:32, HD): John Musker and Ron Clements show the official Little Mermaid secret handshake.Classic DVD Bonus Features (SD unless otherwise specified): these features were ported over from the last DVD release:Promo Trailers (HD): The Jungle Book, Frozen, Mary PoppinsDVD version of the film/Digital Copy/Music: the disc and instructions for downloading the digital copy and the music are enclosed.

The Little Mermaid still ranks as one of the great Disney animated musicals. Coming to Blu-ray after many of its contemporaries have already made an appearance fills a gaping hole in the Disney animated Blu-ray catalog. The 3D conversion is pleasant but not a required upgrade for the film. Nevertheless, highly recommended!

I've already made it clear we're watching TLM next Tuesday night, I don't care what time I get home from work. This is going to be the highlight of my month.

For his part, my BF is completely okay with this.

Is this Kenneth Mars the same as in the Mel Brooks films?

Johnny Angell said:
Is this Kenneth Mars the same as in the Mel Brooks films?
Click to expand...

After watching the youtube video that demonstrates all the little "mistakes" that were made, I finally understand what happened. Unlike the older Disney films where they attempted to rejuvenate the image though DNR, for this release they reassembled all the elements from scratch which resulted in all these errors, such as a hand in front of something it was supposed to be behind, a cut in place of a dissolve, a couple of shots in the wrong order, and so on. As for the titles being moved around, I thing that may have been deliberate as they omitted the "Silver Screen Partners IV" credit. In any case Disney seems to be slipping in the quality control department.

Interesting, but the 2006 has problems of its own and should not be considered "accurate".
You must log in or register to reply here.