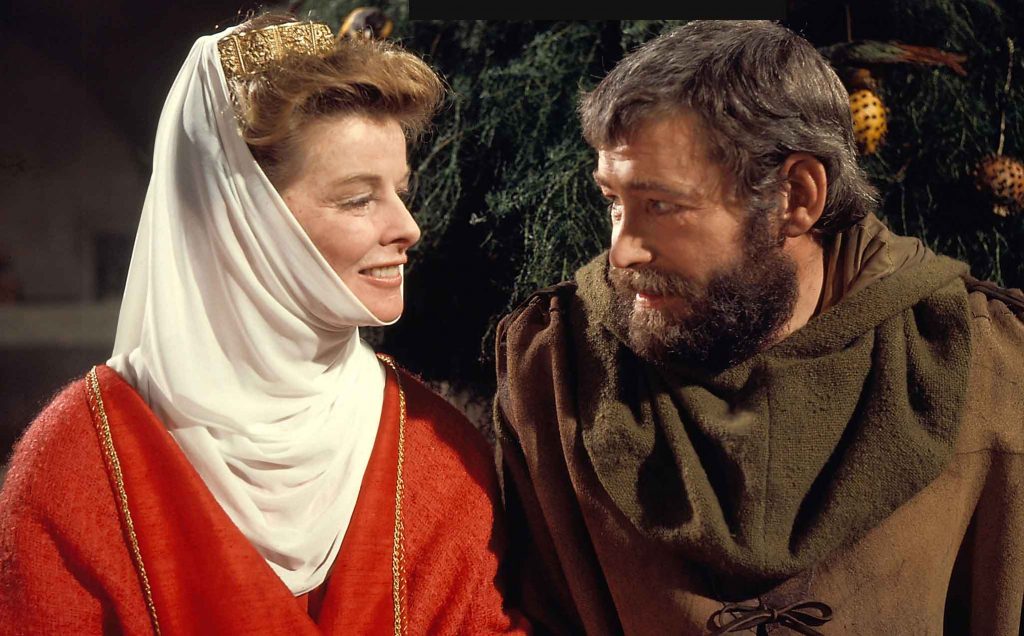 It's Christmas Eve of 1183, and aging monarch Henry the second (Peter O'Toole) releases his wife Eleanor of Aquitane (Katharine Hepburn) to meet with France's Prince Philip the second (newcomer Timothy Dalton). Henry also needs her to help plot out which of their 3 sons will inherit his kingdom. Henry pushes for dopey 3rd son John (Nigel Terry) while Eleanor favors first born Richard (the Lionhearted) (also a newcomer, Anthony Hopkins). Both are fearful of the scheming middle child Geoffrey (John Castle). Playing the wild card is Richard's betrothed, Alais (Jane Merrow).
Henry is well aware of the perils this decision entails, with each losing participant capable of colluding with both landed Eleanor, whose Aquitane is a key strategic property, and with Philip, as France has historically been both friend and foe. Henry is further aware of the parallels he shares with Shakespearean tragedies, King Lear in particular.
Based on James Goldman's Broadway production of the same name, Goldman rewrote the script for the screen. The plot is a marvel of deft negotiations, backstabbing, potentially front stabbing, and the unravelling of multiple layers of family secrets that continually threaten to drive right in to tragedy. Somehow tragedy never seems to keep strike while bouncing between comedy and drama.
[review]
Reactions: Peter Keller, Jimbo64 and Robin9

It should be noted that the film received three Academy Awards for Best Actress (Hepburn), Best Adapted Screenplay (Goldman) and Best Music Score John Barry. Surprised no mention of him in your review.

The late 60's and early 70's were big on the zoom lens. Check out THE OMEGA MAN, citing one that comes right to mind.

Your review is excellent but I would add a bit to your rating of the special features -- there is also a director commentary track.
Reactions: Peter Keller and Sam Posten

Will note that, @Dick thanks!