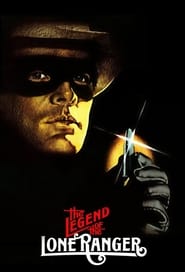 Title: The Legend of the Lone Ranger

Plot: When the young Texas Ranger, John Reid, is the sole survivor of an ambush arranged by the militaristic outlaw leader, Butch Cavendich, he is rescued by an old childhood Comanche friend, Tonto. When he recovers from his wounds, he dedicates his life to fighting the evil that Cavendich represents. To this end, John Reid becomes the great masked western hero, The Lone Ranger. With the help of Tonto, the pair go to rescue President Grant when Cavendich takes him hostage.
What is the story behind this movie? It seems their is a lot of animosity towards it. I know it is a little campy, especially Reverand Jim as the bad guy. But, I don't take it to seriously and enjoy it. Although, I did read that the leads voice was dubbed. I never understand why they would do that.

Also, does anyone know who owns the rights and if it will be coming to dvd?

The Legend of the Lone Ranger

The lead actor, Klinton Spilsbury (his one and only movie, if the imdb is correct), was dubbed by Stacy Keach (or was it James Keach?). Test audiences thought Spilsbury's real voice was lacking in authority to be believed.

It was released theatrically by Associated Film Distribution and may now be controlled by Universal, but the AFD stuff ended up with a whole bunch of different studios, so who knows where it resides now.

Aside from some beautiful photography by Laszlo Kovacs (the movie was directed by noted cinematographer William A. Fraker) and some good John Barry music, there's not much that 1981 audiences enjoyed. I had the dubious pleasure of running this theatrically to a nearly empty house every day for a week. It was a financial flop and critically slammed; AFD had a pretty good record that way: Saturn 3, Killer Fish, Green Ice, The Mirror Crack'd, and Raise the Titanic were all bombs.

I really liked this film, it was more of a family film, definitely better that TV movie on UPN or WB.

I don't think Klinton Spilsbury did too bad, considering it was strictly physical, Michael Horse was okay considering the little dialogue he had to work with, Christopher Lloyd did a fine job as Butch Cavendish and Jason Robards turned in a usual good performance as President Ulysses S. Grant.

The film would have been better with a stronger script and an epic feel befitting such a beloved character. If a film about the Lone Ranger is going to be made, I believe John Landis was going to a few years ago, they could do worse than basing it on this one. A solid film.

I liked Raise the Titanic I'd buy the DVD

I think the reason the film wasn't embraced by the public had more to do with the public humiliation of the original Lone Ranger actor Clayton Moore.

I remember it was either the producers of the new film or someone who rights to the Lone Ranger character that made the actor give up his Lone Ranger mask in a court room setting.

It's been a long time but I remember seeing Clayton Moore on t.v. in court crying because he had to relenquish an item that was dear to him. He really loved playing the Lone Ranger and the mask was a precious reminder of the days when he used to film the t.v. series.

Actually it really is an enjoyable film, not as bad as some would make it out to be. I would definitely own if it were out on DVD.

If that were true Corey, the film deserved what it got. There shouldn't be any reason why Clayton Moore should have to relinquish a memento he held so dear. If he was trying to sabotage the release by implying that he was the one and only true Lone Ranger, than I can understand.

I remember some reports that Spilsbury wasn't completely stable with reports of drunkeness and assault........on a woman. I don't remember if these were allegations or incidents but the negative press wouldn't bode well for such a wholesome character.

I thought Moore only had to stop wearing the mask in public?

Regardless, I really liked the movie back in 1981. However, one of the local channels played it late, late one night a few months back. It did not hold up well at all, IMO.

I just was reading that the actress that played Amy Stryker died in 1995 of a heart ailment. She was only in her 40's. :frowning:

I remember my dad taking me to see this back in 1981. I remember both of us enjoying it.

I also remember having a Long Ranger board game and Lone Ranger action figures...

I saw it in a theatre back then, and I thought it was pretty bad.

Just reviving this thread to see if their may be any news about this movie coming out?

Legend of the Lone Ranger is finally coming to DVD this September, from LionsGate according to thedigitalbits.com.

I think the reason the film wasn't embraced by the public had more to do with the public humiliation of the original Lone Ranger actor Clayton Moore.

I remember it was either the producers of the new film or someone who rights to the Lone Ranger character that made the actor give up his Lone Ranger mask in a court room setting.

It's been a long time but I remember seeing Clayton Moore on t.v. in court crying because he had to [relinquish] an item that was dear to him. He really loved playing the Lone Ranger and the mask was a precious reminder of the days when he used to film the t.v. series.

I don't remember this movie, but I do remember seeing an episode of Night Court that must have been based on that incident.
Click to expand...

My father went to school with Klinton Spilsbury and said he was one of the most popular guys in school and was in all the drama productions. Everyone thought he was going to be a big hit on the silver screen.

His one and only movie was such a flop. Pretty sad for someone who everyone thought had a bright future in acting.

I also enjoyed the movie when I was a kid. I have not seen it in ages.. I am glad to know that its coming to dvd..I will probably have to pick it up.

There's a NEW Lone Ranger movie that Jerry Bruckheimer is developing with the Pirates of the Caribbean writers. Hopefully it's better than this film.
Movie information in first post provided by The Movie Database
You must log in or register to reply here.

The HTF Film and Television Necrology for 2006