With influences from other heavily CGI sword and sandal epics like 300 and Immortals, Renny Harlin’s The Legend of Hercules registers as more a lightweight than a heavyweight in the action and fantasy departments. While the legendary muscleman/demigod has toplined many movies in cinema history, The Legend of Hercules does not distinguish itself as one of the best even with decent production values and some respectable talent in the major roles. With The Rock’s version of Hercules coming later on this year, this entry is likely to be quickly forgotten. 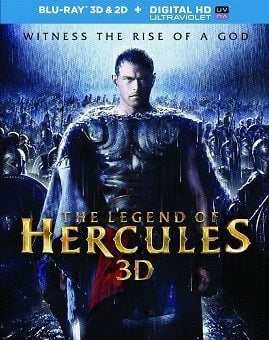 Despising her tyrannical husband King Amphitryon (Scott Adkins), Queen Alcmene (Roxanne McKee) prays to the gods to give her a son who can one day defeat the despotic ruler. A seer (Mariah Gale) is possessed by Hera telling the queen that Zeus has her permission to implant his seed, and the subsequent child will be known as Hercules (Kellan Lutz) though after the birth the king practically disowns the boy he names Alcides favoring instead his firstborn son Iphicles (Liam Garrigan). Twenty years later, the brothers are both after the same girl, Princess Hebe of Crete (Gaia Weiss), but Amphitryon sends Hercules and a small regiment of soldiers to quell some alleged disturbance in Egypt, but on the way he’s laid a trap to wipe out Hercules and the regiment. As it happens, Hercules and General Sotiris (Liam McIntyre) survive the attack but are sold into slavery and later surprise their owner when they prove more than able warriors in mud pit gladiatorial combat. But Hercules knows he must get back to his homeland to pay back his hateful father and to stop his unscrupulous brother from marrying his true love, and time is running out.Strong-willed brothers locked in mortal enmity with a father who favors his own weak son over the stronger and more worthy stepson: sounds familiar, doesn’t it? The screenplay by Sean Hood and Daniel Giat is short on invention and completely ignores many of the most important pieces of the Hercules legend (though he does fight the Nemean Lion in an early and poorly shot sequence). Instead we’re given a tired, uninspired love triangle and six fight scenes which seem underpowered and unimpressive. Renny Harlin is certainly capable of directing riveting action scenes, but the fight scenes here from the opening face off with King Amphitryon showing his prowess to later fights where Hercules proves his valor and unstoppable spirit just never quite get the juices flowing. The main problem is that Harlin repeats a trope he’s been using quite a bit in his latest films: applying slow motion and stop frame work in the midst of action scenes which tends to rob them of their intensity and impact (the bodies in motion are pretty and the high flying leaps and spirals aren’t without merit, but how much more impressive would they be if we could see them in real time). With that and the below average CGI work which never convinces us we’re in the midst of the huge arenas and amphitheaters that the filmmakers are wanting us to imagine, it’s little wonder that all of the actors’ hard work and training doesn’t quite get the empathetic reaction from an audience that they should.Instead of casting a more beefcake-packed giant in the title role, the producers have instead cast Kellan Lutz. He’s certainly muscular enough and rugged enough to pass muster as a hero, but he won’t be most people’s first idea about who should play a proper Hercules, and his acting seems rudimentary and not quite driven enough. More impressive is Scott Adkins as the evil King Amphitryon. His build is every bit as impressive as Lutz’s, and getting to play evil is always a more delicious assignment for an actor, one Adkins seems to be relishing. Liam Garrigan is likewise effective if a tad more stereotypical as the weaselly weak older brother Iphicles. Roxanne McKee as the Queen seems a bit too young for the role of Hercules’ mother though she handles her scenes quite well. Gaia Weiss seems rather colorless as Hebe and doesn’t demonstrate much chemistry with either Lutz or Garrigan. Liam McIntyre who had a nice run on TV as Spartacus knows a thing or two about portraying a hero, and his performance as Sotiris has all the colors that Lutz’s work lacks and frankly makes one wonder why he wasn’t cast in the leading role.

The film is presented in its theatrical aspect ratio of 2.40:1 and is offered in 1080p resolution using the AVC (for 2D)/MVC (for 3D) codec. Sharpness is outstanding throughout the film’s relatively brief running time, and color is quite rich and deep with natural skin tones on display. Black levels are very impressive. The film has been divided into 21 chapters.For a movie that was filmed in 3D, the implementation is rather disappointing. Depth isn’t nearly as effective as it is in other 3D works, and the layering of objects and characters on separate planes is spottily effective but not consistently practiced. There are some forward projections: arrows and fireballs come right at the viewer at the very beginning, but afterwards, there are occasional swords, spears, arrow tips, and stone slabs which approach the frame without ever quite breaking that fourth wall. Director Renny Harlin is also very fond of having things drift around in the frame along with his actors: dandelion tufts, snow, water droplets, confetti, rose petals, but again, nothing ever seems to break the fourth wall and come out toward us, and occasionally there are continuity problems with the floating objects being in one shot but not the subsequent one.

The DTS-HD Master Audio 7.1 sound mix is mostly superb. There is plenty of surround activity to keep the fronts and rears plenty busy with split effects and panning through the soundfield. There is directionalized dialogue that’s most effective even though occasionally the dialogue in the center speaker seems a little regressive and lacking punch. Tuomas Kantelinen’s driving music and angelic spirit voices get a nice spread through the entire soundstage.

With mediocre action and rather ordinary 3D, there’s not a lot to recommend about The Legend of Hercules. The Blu-ray disc does offer reference picture and excellent sound, but the storytelling and use of CGI is strictly second rate.

I will certainly scratch this off my list of 3D titles to acquire.

Thank you for the review and warning, Matt.

You might as well go back and watch Steve Reeves rather than watch this lukewarm, 10 year old CGI, poorly acted, muscle-bound waste of two hours of your life. Why does Hollywood keep bankrolling Renny Harlin? Remember, he's the guy who made "Cut throat Island".... Period. Don't waste your hard-earned money - even to stream it.

I wish I had read your review BEFORE I Netflix'd this.

Cutthroat Island is one of my favourite films from the nineties, great music score, good action role for Geena Davis who really put everything into her character, some tasty dialogue and large scale quality action scenes, it also has one of the most memorable ship blowing up scene's committed to film, i actually prefer Cutthroat Island to any of the Pirates of the Caribbean films.

To each his own though, i think Renny Harlin used to be a very good action film director.

FoxyMulder said:
Cutthroat Island is one of my favourite films from the nineties, great music score, good action role for Geena Davis who really put everything into her character, some tasty dialogue and large scale quality action scenes, it also has one of the most memorable ship blowing up scene's committed to film, i actually prefer Cutthroat Island to any of the Pirates of the Caribbean films.

To each his own though, i think Renny Harlin used to be a very good action film director.
Click to expand...

Noy my fave but otherwise agree. I never thought this movie deserved the bad rap. Frank Langella's performance was fun as well. I'll take this over CROSSBONES and BLACK SAILS (as well as the CARIBBEAN movies) anyday! Wonder if it might be time to give Roman Polanski's PIRATES a re-visit...I barely remember it!
You must log in or register to reply here.