The haunted house sub-genre is one that can be fun for audiences when done right. Poltergeist, the original 13 Ghosts, The Woman In Black, The Changeling, and even The Amityville Horror (A Haunted House 2, not so much). One of the films that help set the standard was John Hough’s The Legend of Hell House from 1973, which was a staple on late night television in the late 1970s and early 1980s. 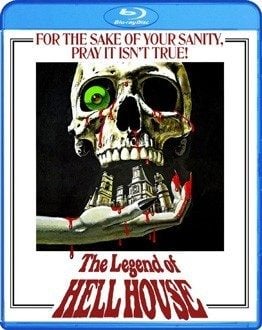 An eccentric millionaire hires physicist Lionel Barrett (Clive Revill), physical medium Ben Fischer (Roddy McDowall), and spiritualist minister/mental medium Florence Tanner (Pamela Franklin) to provide proof of life after death by occupying what Barrett refers to as “the Mount Everest of haunted houses,” the Belasco estate (which the millionaire has just purchased) for one week. In tow is Barrett’s wife, Ann (Gayle Hunnicutt). The house has been nicknamed Hell House for a good reason - the previous owner, Emeric Belasco, was known to practice all kinds of deviant behavior including witchcraft and Satanic worship while living in the house, and twenty years earlier nine scientists and mediums attempted to prove the same thing with only one survivor, Ben Fischer. Almost immediately upon entering the house, strange things begin to happen: something is sleeping in Miss Tanner’s bed; objects are hurled through rooms; strange noises and voices are heard; Mrs’ Barrett undergoes a sexual awakening; and Miss Tanner is raped by a spirit she believes to be the owner’s son, Daniel. But Dr. Barrett has a machine he has constructed that he hopes will polarize the electromagnetic energy that he believes is causing the mayhem.Adapted from the novel Hell House by the author himself, Richard Matheson (Duel, The Twilight Zone), the screenplay transplants the story from New England to the London countryside (hence the British cast and crew), and does so quite nicely. Director of Photography Alan Hume (Star Wars Episode VI: Return of the Jedi) and Director John Hough (Escape to Witch Mountain) create a sense of eeriness and claustrophobia though the use of shadows and strange camera angles, and the special effects team pull off some great physical gags that still hold up today in this age of CGI. The cast make all the mumbo jumbo believable (not an easy feat), and the biggest surprise is how the film managed to obtain a PG rating from the MPAA with all of the sexual undertones running throughout the film.My initial exposure to The Legend of Hell House was from its rotation on the Saturday Midnight Movie on WPVI-TV in Philadelphia during the late 1970s and early 1980s. Even in its watered down TV version, the film often managed to scare the crap out of my friends and I during many a sleepover, and if we had a choice between Hell House and SNL, we always choose the former. The only thing really dating the film is Barrett’s machine, a towering metal box with dials and analogue meters on it. That aside, forty years after its initial release, the film still works.

The 1080p AVC-encoded transfer (which retains the film’s 1.85:1 aspect ratio) provided to Scream! Factory is, perhaps, the best its likely to look. Colors are vibrant and not over saturated, blacks are inky deep, contrast is superb, and contains excellent fine detail. Film grain is visible, but natural and non-obtrusive, however the print does show some signs of wear with some occasional minor scratches and blemishes. There is some very noticeable softness and color shift during many of the optically processed shots (such as the on-screen countdown of days), typical of a film of this age.

The DTS-HD Master Audio 2.0 mono track is nothing to get overly excited about, but nothing to get upset about, either. Dialogue is clear and understandable, and the early electronic score by Delia Derbyshire and Brian Hodgson comes across nicely with the added resolution. There are some occasional pops and hiss within the soundtrack, but you really have to be listening closely for them to be noticed.

Audio Commentary with Pamela Franklin: To be fair, this is more of a recorded and edited interview with the actress while watching the film than an actual commentary (which is probably why the cover lists this an audio interview and not a commentary). Franklin does not begin to speak until her character first appears on screen, and quite often she will be discussing a scene she is watching, but it won’t match what the viewer is seeing. Franklin discusses her work on the film and her interaction (or lack thereof) with her castmates during production, as well as her career and her tastes in film.The Story of Hell House: An Interview with John Hough (1080p; 28:19): The director discusses the production of the film, his career, his style of filmmaking, and how proud he is of many of the physical effects his crew managed to pull off on the film (but like a good magician, refuses to give the tricks away).Theatrical Trailers (480i; 2:28): The original trailer for the film.Radio Spots (1080p; 2:00): A collection of three radio ads for the film.Photo Gallery (1080p; 2:50): Production still from the film.Also Available from Scream! Factory (480i; 4:47): Trailers for The Vampire Lovers and The Amityville Horror.Reversible Insert Cover: Choose between the new Scream! Factory artwork or artwork based on one of the film’s original posters.

The Legend of Hell House is a frighteningly fun film without relying on gore, and still stands as one of the best haunted house movies to this day. Scream! Factory’s presentation is wonderful, and although the extras are a bit weak, they are still a worthy addition.

This is my favorite "Haunted House" movie ( for me, just a little ahead of it's heritage "The Haunting" ) - really creepy putting you in an uneasy state with a strong sense of dread/fear with very little, if any, explicit bloodletting/gore in sight. Classic I tell ya

I 2nd (or 3rd) my gratitude for Scream! Factory releasing this film on blu-ray. Like many others around here, this is my favorite 'haunted house' film -- bested just a tad by 'The Haunting' that scared the beejeezus out of me when I was kid. Anyway, it's on my shopping list - nothing for the cats this week ... ;o(

Yes, this built a reputation with many television showings and I had the same experience with it as Todd, growing up in the 1970s and 1980s. Sleepovers were planned around when this was going to air. It was and still is a fun haunted house film. I ordered this and it should arrive before the weekend. I will probably hold off watching it again until October but happy to read the positive review here.

As a funny side note, I once met Clive Revill when he was doing a production of A Christmas Carol, he played Scrooge. I had been given front row center seats to the show and during the production Clive oddly made direct eye contact with me several times and usually had some sort of shocked look on his face when he did...it was sort of strange. Anyway, after the show the players all came out into the lobby and I was standing out there with my girlfriend and turned around at one point and there was Clive standing right there behind me...he is quite short by the way...he looked up at me and said "Did you enjoy the production?" and I said "Yes, you seem to specialize in bringing ghost stories to life."

Clive just stared at me with a blank expression and so I added "I'm a big fan of The Legend of Hell House."

After a moment he said "Really..." long pause as he sort of stared off into space and then "...thank you."
You must log in or register to reply here.