The Legacy takes the British haunted house genre and borrows heavily from Agatha Christie’s Ten Little Indians to tell the tale of a group of visitors meeting at an old country mansion to learn who will inherit the master’s wealth and powers. Although the movie plays like a whodunit, the studio's marketing team spoiled the surprise in their TV spots and trailers that should have come with a spoiler alert, thus sucking most of the suspense out of the movie. 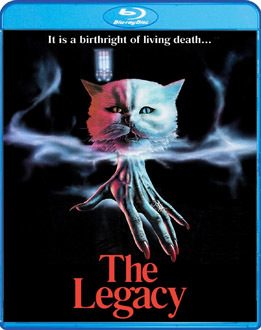 Margaret Walsh (Katherine Ross) and boyfriend Pete Danner (Sam Elliott) are interior designers in Los Angeles who have just been offered a hefty sum to travel to England for a job they know nothing about. They take the offer and leave for England for a brief vacation before starting the job. The two rent a motorcycle for a ride in the countryside, and find themselves run off the road by a Rolls Royce. The chauffeur, Harry (Ian Hogg), and his rider, Jason Mountolive (John Standing), apologize to the couple and offer hospitality in Mountolive’s mansion while the bike is repaired. Shortly after arriving at the mansion, several guests begin to arrive for the weekend, all for a meeting with Mountolive. Margaret finds herself invited to this meeting, where she finds out that Mountolive is on his deathbed (even though he seemed in perfect health earlier). Mountolive places a ring on her finger, telling her that she is one of the possible heirs to his estate and his powers. One by one, each of the guests are killed off in a similar manner to a crime they were accused of but Mountolive assisted them in getting away with.

Time has not been kind to The Legacy, which is severely dated by its very 1970s-style score by Michael J. Lewis, relying on variations of its opening theme song (the very upbeat Another Side of Me, sung by Kiki Dee) throughout much of the film. Although the two leads have chemistry together (Ross and Elliott were married shortly after completing the film), Elliott seems miscast in the role of a male interior designer, and has since joked publicly about the film. Ross has very little to work with, often looking frightened and nothing more. Roger Daltrey gives a fun performance as a music promoter, and fans of The Rocky Horror Picture Show will likely get a kick out of seeing Charles Gray as a German entrepreneur (he also played Blofeld in Diamonds Are Forever). What really brings the movie down is the incredibly slow pacing from director Richard Marquand (best known for Star Wars Episode VI: The Return of the Jedi and Jagged Edge) and editor Anne V. Coates (Lawrence of Arabia), failing to bring any suspense, thrills, or even chills from the material. Of course, Universal’s marketing team at the time didn’t help by revealing the ending in all of their trailers and TV spots (included here in the Special Features).

The 1080p transfer supplied to Shout! Factory by Universal is compressed using the AVC codec, opening up the frame slightly to an aspect ratio of 1.78:1 (even though the packaging states 1.85:1). The print used for the transfer is relatively clean, although there is some evidence of very minor dirt and minimal scratches here and there baked in, but are never distracting. Colors appear accurate, although slightly faded (like most British films of this era). Contrast is very good, with deep inky blacks. Detail is also very good, revealing textures in fabrics and strands of hair (particularly Sam Elliot’s mustache).

For a late 1970s Dolby Stereo theatrical release, the included DTS-HD Master Audio 2.0 stereo matrixed surround track is quite good. Dialogue is directed mostly to the center channel, with some occasional atmospheric effects and music spread out across the left, right, and surrounds when playing back in Pro-Logic mode.

Interview with Editor Anne V. Coates (1080p; 13:47): David Lean’s main editor discusses her work on The Legacy, including directing second unit for the car crash sequence at the beginning of the film.

Interview With Special Make-Up Effects Artist Robin Grantham (1080p; 10:46): Grantham discusses many of the effects he created for the film.

Theatrical Trailer (upscaled 1080i; 1:43): Obviously cropped to 1.33:1, especially when the final title card appears at the end.

Photo Gallery (1080i; 2:32): A collection of movie posters, lobby cards, and promotional stills.

A fairly solid transfer with some notable special features for a silly, often forgotten horror film from the late 1970s that suffers from slow pacing and odd casting choices, not to mention a spoiled ending by the marketing team.