Yet another modern variation on the premise of Frankenstein, David Gelb’s The Lazarus Effect is an increasingly silly and insipid horror film. There are decent actors here, but they’re at the mercy of a terrible script that never rings true for a second and a production that is so infuriatingly manipulative that you can see the shocks coming from a mile away. This is one for the dustbin. 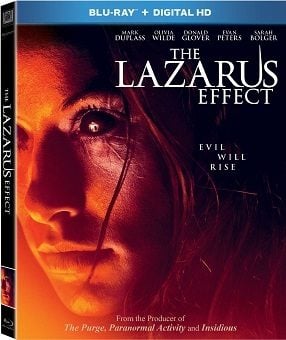 Four scientists who have been using a big university grant to work on an unauthorized project involving resurrection of the dead find their project shut down once their secretive work is discovered. Engaged couple Frank (Mark Duplass) and Zoe (Olivia Wilde) along with Clay (Evan Peters) and Niko (Donald Glover) and videographer Eva (Sarah Bolger) had just made a breakthrough with their serum by bringing a dog back from the dead (and curing the illnesses from which it died) when their project is terminated, but breaking back into the lab that night to do one final experiment results in Zoe’s being electrocuted and subsequently dying. Unable to resuscitate her by conventional means, Frank injects her with the “Lazarus” serum which does in fact bring her back to life but just like the dog that had previously been reanimated, Zoe begins exhibiting increasingly strange and dangerous side effects which put everyone’s life at risk especially since they’re all locked in their lab with no way to escape while the increasingly out-of-control Zoe goes on a rampage.

Luke Dawson and Jeremy Slater’s script may have intelligent scientists as characters, but they certainly spend most of the movie making one stupid and nonsensical decision after another much to the detriment of the film’s ability to create persons for whom we sympathize. From the moment the resurrected dog begins showing violent and unearthly abilities and naturally from the instant Zoe begins finishing their thoughts, moving objects with her mind, or insisting something bad is happening, these scientists should have been on their guard, but they wade willy-nilly into situations where injury is a surety and death a very real possibility, and the idea that they wouldn’t have considered contingency plans for their experiments does not reflect well on their intelligence levels. Director David Gelb falls back on all of the overused tropes of the genre: jarring shock takes with screeching sound jacked up to the max, misdirects followed immediately by the real scares, flickering lights where creepy things appear between blackouts, and the script conveniently brings damsel in distress Eva into Zoe’s memories of a childhood trauma trapped in a burning building while absurdly trying to subdue the now all-powerful monster Zoe has become. If the actors weren’t trying so hard to make something frightening out of this hokefest, one might simply laugh and dismiss it, but one’s heart bleeds that their most valiant efforts to make something of this twaddle are going to be in vain.

Olivia Wilde has the widest story arc as the thoughtful Zoe transformed into an avenging creature as the serum turns her from human to monster, but the make-up and digital effects are often as silly as they are sinister. Comedian Mark Duplass is playing it straight here as the head scientist, but it’s a rather bland portrayal and doesn’t generate much empathy from the viewer when his ego and ambition directly lead to the death of his fiancé. Evan Peters is rather a jerk of a character this time out and doesn’t come off as particularly bright either. Donald Glover’s is a rather throwaway role though Sarah Bolger cringes in dark corners quite nicely once the havoc begins. Ray Wise is fittingly (and entertainingly) unctuous as the man who shuts down their resurrection experiments.

The film’s theatrical 2.40:1 aspect ratio is presented in 1080p using the AVC codec. It’s a terrific transfer: razor sharp, very colorful early-on before things turn dark and more monochromatic with believable skin tones, and with superb black levels which offer sterling shadow detail. Contrast has been expertly applied and consistently maintained. The movie has been divided into 24 chapters.

The DTS-HD Master Audio 5.1 sound mix does an outstanding job using the fronts and rears to offer up an atmospheric sense of claustrophobic danger with panning sounds which whoosh across and through the soundfield to great effect. Deep bass gives the subwoofer a nice workout while Sarah Schachner’s music gets the full surround treatment. Dialogue has been superbly recorded and has been placed in the center channel.

Deleted and Extended Scenes (4:25, HD): three scenes may be watched separately or in montage fashion.

Horror aficionados might get a momentary kick of two from a rental of The Lazarus Effect, a bargain basement-level piece of terror entertainment, but most won’t find much here to celebrate. The audio and video are first-rate, however, for those who wish to give it a try.