William Sachs’ The Incredible Melting Man has, over the years, developed a cult following thanks to the early make-up work by Rick Baker. And it is Baker’s effects that are the real star of the film, an often silly sci-fi horror film aimed at the 1970s drive-in circuit about an astronaut who returns from Saturn, only to find that he must consume living cells or melt away into oblivion. 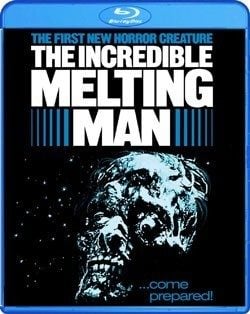 Director William Sachs is probably better known for Galaxina, due mostly to the tragic fate of the film’s star, former Playboy Playmate Dorothy Stratten. But his other somewhat notable film, 1978’s The Incredible Melting Man, has something of a cult following, thanks to both Rick Baker’s gory make-up effects and the fact that the film was featured on Mystery Science Theater 3000 during its seventh season. For me, though, the film has a special place in my heart because I actually owned both the Pressman make-up kit (which I got a lot of mileage from over several Halloweens) and the Ken Films’ 400’ Super 8mm digest reel. The kit helped me to gross out my sisters and fellow classmates, and the digest reel was a favorite among my friends for its weirdness, goriness, and, of course, brief nudity (we’re talking about teenage boys, after all).The Incredible Melting Man opens as three astronauts begin to orbit Saturn, entering its rings to get a glimpse of the Sun. As soon as Astronaut Steve West (Alex Rebar) exclaims, perhaps one of the most quoted lines from the film, “You’ve never seen anything until you’ve seen the Sun through the rings of Saturn,” tragedy befalls the crew, and the next thing we know, Steve is laying in a hospital bed, covered in bandages. He awakens, chases a nurse down a hallway and through a glass door, and escapes out into the public. Steve’s best friend (and doctor), Ted Nelson (an extremely bland Burr DeBenning), notifies General Michael Perry (veteran actor Myron Healey) about the escape, and the General orders Dr. Nelson to find Steve and get him back to the lab by morning. Steve begins a killing spree in the small town, drawing the attention of town sheriff Neil Blake (character actor Michael Alldredge). Sheriff Blake and Dr. Nelson team up (along with General Perry) to find Steve in the next seven hours (the audience is notified when the clock tolls 12 midnight), all leading to a showdown at a power plant in the wee hours of the morning.The film has lots of problems, first and foremost with its two leading actors. Alex Rebar’s line delivery is unintentionally humorous during the opening prologue, and it’s actually a good thing that he’s speechless and covered in melting glop for the remainder of the film. Burr DeBanning doesn’t fair much better, giving a blank, emotionless stare when telling his wife some bad news, and his screaming of his character’s name during the last 10 minutes (“I’M DOCTOR TED NELSON!!), as if that will help anyone know who he is, almost becomes a running gag. The other problem is that the audience can tell the film doesn’t want to take itself seriously, but somehow it continues to do so (Sachs explains in his commentary that this was due to a fight with the producers who wanted a straight-up horror film and obviously didn’t read the script). But what truly makes the film notable are the make-up effects by Rick Baker, who had just finished working on both King Kong and Star Wars, and tried to overbid on this film, hoping to not get the job. Such was not the case, and Baker (with some help from Greg Cannom and Rob Bottin) makes a vat of gelatin, corn syrup, and food coloring go a long way, instantly making the film a favorite of Fangoria magazine readers forever. The Incredible Melting Man is one of those movies that is so bad, it is actually good. I should point out, however, that the American International Pictures logo has been replaced with the MGM roaring lion.

The 1080p transfer compressed using the AVC codec, retains the film’s theatrical aspect ratio of 1.78:1, with well-saturated and consistent colors, deep blacks, exceptional detail, all the while retaining a film-like image with grain intact. What surprised me, for a film of this genre and era, was how well-preserved the film is. The print is virtually free of dirt, with some very minor and faint scratches apparent here and there.

The DTS-HD Master Audio 2.0 mono soundtrack is unremarkable, but the fault is in the source material. This was an ultra-low budget film released by American International, and the lossless codec enhances those weaknesses. Dialogue is thin, at times, and the few ADR lines are very evident. The music is lacking in fidelity, as well. But, then again, these issues are usually expected in a film like this.

Audio Commentary with Writer/Director William Sachs: Sachs has a lot of stories to tell, many not having much to do with this film, and is still somewhat bitter over the clash he had with the producers. So much so, that he intentionally talks over the opening prologue explaining how the producers went behind his back to shoot it as a second unit, and, in his opinion, ruining the big reveal at the end. This is an interesting commentary, but Sachs does tend to have a few wild hares throughout.Interview with Make-Up Effects Artist Greg Cannom (HD, 2:56): Cannom discusses, very briefly, how he got his start by working at Knott’s Scary Farm and being hired by Rick Baker to assist with the make-up effects used in the prologue.Interview with Writer/Director William Sachs and Make-Up Effects Artist Rick Baker (HD, 19:37): The two were interviewed individually, and are intercut as they each discuss the making of the film. Sachs discusses his butting heads with the producers and praising Baker’s work, while Baker talks about trying to overbid on the project so as not to be seen as turning his back on low-budget horror (where he got his start), creating the effects from nothing, and dealing with actor Alex Rebar.Theatrical Trailers (HD; 1:48): Two trailers are featured, the first (teaser) has more of an EPK feel to it, highlighting the work of Rick Baker and using behind the scenes footage.The second is a more straightforward trailer using clips from the film.Still Gallery (HD; 4:22): A collection of production and promotional stills, including newspaper ads, lobby cards, and posters.Radio Spot (SD; 0:31): More or less just an audio excerpt of the teaser trailer, praising the works of Rick Baker.

Shout! Factory has certainly surprised fans of this film by not only licensing the film from MGM, but including some bonus features that included the involvement of writer/director William Sachs and make-up effects artist Rick Baker.

I was into magic and not makeup as a kid. Mom got me magic kits. I have to wonder if she saw the alternative. ... gory make up kit? no. Chemistry set? Nope!
C

Sachs also made the cult favorite Van Nuys Blvd which seemed to come in all the Crown International DVD sets with The Van.

I blind bought this one so it's nice to hear it was done right. Now to decide if I should watch it right away or wait for the horror challenge in October!

Russell G said:
I blind bought this one so it's nice to hear it was done right. Now to decide if I should watch it right away or wait for the horror challenge in October!
Click to expand...

Russell G said:
I blind bought this one so it's nice to hear it was done right. Now to decide if I should watch it right away or wait for the horror challenge in October!
Click to expand...

One of the absolutely worst low budget quickies I have ever seen. Ranks right up there with Jesus Christ: Vampire Hunter and Children of the Damned. Rick Baker's SFX are clumsy too. Better than I expected, but what a silly, silly movie. Clearly for some the counterculture love in with recreational drugs extended well beyond the 1960s.

In his favor, Baker does make it look like that dude is melting... cheese and all.

Just watched this. I think "so bad it's good" is very subjective. Perhaps if I had seen this as a child and could bring back "those lovin' feelings" I'd enjoy the movie. This movie is so bad, I wonder why my oppo doesn't explode in disgust. This movie sucks in a bad way. It's a steaming pile of ... Well, you know what. It's inept, cheap, and so poorly acted. Oh boy. All IMHO of course.
You must log in or register to reply here.