Ang Lee’s deeply melancholic and near-nihilistic view of families coming apart gives The Ice Storm an almost devastating poignancy. These are people who find no joy in anything: their jobs, their families, their friends, their lovers, their lives. Existence is tolerated without being celebrated, and we’re left with a debilitating sadness examining the lives they’ve carved out for themselves. Icy indeed are the stories of the individuals portrayed in this movie, and their ultimate ends are as gray and uncertain as the storm-drenched sky that towers over them. 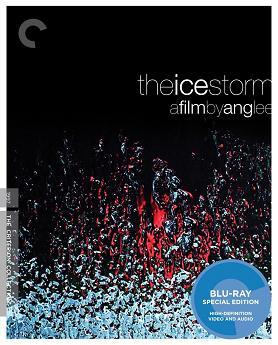 The Hood family is in the throes of Thanksgiving doldrums circa 1973. Ben (Kevin Kline) is being challenged at his job by an ambitious hotshot (Henry Czerny), his marriage to Elena (Joan Allen) is joyless and almost sterile, the affair he’s having with neighbor Janey Carver (Sigourney Weaver) gives him sexual release but no satisfaction, and his children (Tobey Maguire, Christina Ricci) are hormonal and thus utterly unpredictable. Elena is vaguely aware of the affair but seems emotionally unresponsive to that, channeling her rage into unpredictable acts (shoplifting in a local drug store, agreeing to attend a “key party” involving wife swapping) while daughter Wendy clumsily seduces both Carver boys (Elijah Wood, Adam Hann-Byrd) and son Paul is fighting for his own sexual favors from crush Libbets Casey (Katie Holmes) who’s more interested in Paul’s promiscuous roommate Francis (David Krumholtz).Lee’s direction is glacially smooth and detailed capturing the early 1970s beautifully in both look and tone: you’d almost consider the film a time capsule representation of the sights and sounds of this turbulent period in American upper middle class existence. Yes, some of the same swooping overhead crane shots that made Sense and Sensibility so graceful are at play here, too, though the emotional and climatic environment couldn’t be steelier or frostier. James Schamus’ screenplay is based on the novel by Rick Moody, and the unhappiness and lies that we see and hear everywhere, not only among the cheating family members but reflected in the blustery and deceitful Richard Nixon making empty speeches on television, seem endless and endlessly and destructively painful.Kevin Kline’s natural ebullience has to be reigned in mightily for him to enact the frustrated and duplicitous Paul, and he accomplishes it beautifully etching a superb character searching for some kind of happiness or sense of accomplishment. Joan Allen’s inert eyes speak volumes about her unhappy existence while Maguire and Ricci at this stage of their careers have tremendous talent to play these smart but emotionally torn teens. Lee has rounded up an amazing cast of outstanding talent who often play leading roles in other projects but here play (sometimes small) supporting roles to be a part of this ambitious domestic slice-of-life drama. Sigourney Weaver’s Janey seems a bit one-note for this superlative actress, but Jamey Sheridan playing her husband makes much out of a few brief scenes. Allison Janney as the host of the key party that includes John Benjamin Hickey, Henry Czerny, Michael Cumpsty (as a minister seemingly attracted to Allen’s Elena), Kate Burton, and Jonathan Freeman, and Glenn Fitzgerald makes a welcome albeit brief surprise appearance.

The film’s 1.85:1 theatrical aspect ratio is presented in a 1080p transfer using the AVC codec. Sharpness is mightily impressive throughout with lots of detail in facial features, clothes, and hair, and the image is clean with solid but unostentatious color. Though the color palette is mostly grays and steel blues, there are some occasional richer colors like lime greens and burgundies that also catch the eye, and flesh tones remain realistic throughout. Black levels, very important to the film’s effectiveness, aren’t at their deepest possible level, but they’re more than adequate. The film has been divided into 25 chapters.

The DTS-HD Master Audio 2.0 stereo surround track offers very good fidelity. The sound designers have gotten far more use out of the surrounds for what is basically a meditative drama than one would have expected. The sounds of the storm itself hiss and fizzle in the rears, and the evocative music by Mychael Danna gets channeled well throughout the soundfield. Dialogue has been beautifully recorded and is always clearly and precisely presented.

Audio Commentary: Producer-writer James Schamus and director Ang Lee have collaborated on an informative and enjoyable commentary. Schamus does a large portion of the talking with Lee adding comments where appropriate. The two are longtime friends and collaborators, so the talk is good-natured with the modest Lee despite all his success still surprisingly humble. The men discuss the casting of the actors, the problems faced during production, getting the period look right for the clothes and props, and dealing with local politics concerning some town elders who didn’t actually want the company filming there due to the notoriety of the downbeat book, and the film’s disappointing initial reception.Weathering the Storm (36:09, HD): an enjoyable star-laden documentary featuring Kevin Kline, Sigourney Weaver, Joan Allen, Tobey Maguire, Christina Ricci, and Elijah Wood discussing their recollections about filming the movie and working with Ang Lee.Rick Moody Interview (21:22, HD): the original author comments on the writing of his book and the transition of the novel to the screen. Philosophical about the inevitable changes that such a journey entails, he’s at least in hindsight grateful that the film got made at all. He also accuses Tobey Maguire of mimicking him to achieve his characterization.Lee and Schamus at the MoMI (32:28, HD): an interview conducted at the Museum of the Moving Image by David Schwartz on the occasion of the premiere of Lee‘s latest film Lust, Caution. The pair discuss each of Lee’s films though The Ice Storm doesn’t receive nearly as much time as some of the other films.The Look of The Ice Storm (HD): three featurettes with a different member of the film’s production team discussing his or her work on the film and the particular problems each faced: cinematographer Frederick Elmes (13:36), production designer Mark Friedberg (14:00), and costume designer Carol Oditz (8:24). Each uses stills, film clips, and illustrations in their discussions about their particular craft.Deleted Scenes (6:50, HD): four scenes which may be watched separately or in toto. There is optional commentary from the writer and director provided with them.Theatrical Trailer (2:31, HD)18-page booklet: contains the chapter listing, cast and crew lists, quite a few color stills, and an essay on the film comparing The Ice Storm to Lee’s other works by film writer Bill Krohn.Timeline: can be pulled up from the menu or by pushing the red button on the remote. It shows you your progress on the disc, the title of the chapter you’re now in, and index markers for the commentary that goes along with the film, all of which can be switched on the fly. Additionally, two other buttons on the remote can place or remove bookmarks if you decide to stop viewing before reaching the end of the film or want to mark specific places for later reference.

The Ice Storm gets an impressive Blu-ray transfer with superlative picture and sound provided. The film’s somber themes and downbeat tone may not be for all tastes, but for introspective drama with a touch of bitter comedy, it’s hard to top. Highly recommended!

Thanks for the great review, Matt. Picking this up at B&N next week while the sale is still on.

Opinions as to the image quality have been rather varied. I'm glad you're pleased with the result; you're one of the reviewers I trust most.

This is one of my favorite flms. To me, 1997 was a great year for films, and there are two of them that have been unavailable in a better version.. The Ice Storm and Eve's Bayou.

This to me solves one of those, now if I could just get the other. This is a film that really worked for me, the performances, the storyline and the way the world for people fell apart in such different ways. Sensational direction as well.

I saw this movie first run; I was a student in grad school. Took a young woman I was dating (or was trying to date) to see it. I was looking forward to it since it, starring Sigourney Weaver and Kevin Kline.

Oh, I hated it. I remember it being a tedious rambly film about people I didn't care about. It was like being trapped in a car ride with that relative who goes on about long-lost family history.

I'm curious how I'd react to it now.

DaveF said:
I saw this movie first run; I was a student in grad school. Took a young woman I was dating (or was trying to date) to see it. I was looking forward to it since it, starring Sigourney Weaver and Kevin Kline.

Oh, I hated it. I remember it being a tedious rambly film about people I didn't care about. It was like being trapped in a car ride with that relative who goes on about long-lost family history.

I'm curious how I'd react to it now.
Click to expand...

On some level I think that is what the creators wanted you to feel for them. Disdain and disgust. So there's that.

I blind bought this during the BN sale and fell asleep watching this last night, oh man I didn't think a family melodrama could have more symbolism and liberal-angst than American Beauty had, but boy did Ice Storm manage to outdo them. I would have been laughing my head off at the strained SYMBOLISM of the Richard Nixon Mask "Sex" scene in the middle of the film if I had been more engaged. So far, I think it's a better film than American Beauty, but that's not to say it's especially good. Stunning cinematography and color/set/production design (again with the symbolism!), I'll definitely have to watch that feature when I slog through the second half.
You must log in or register to reply here.

Tuesday at 11:03 AM
Ronald Epstein