Based on a true story of fanatical devotion and conscienceless murder, The Honeymoon Killers packs quite a wallop more than four decades after its original release. Produced on a shoestring and featuring (at the time) no-name actors playing the real-life killers, The Honeymoon Killers received wonderful reviews and did fine business and grew to have quite a famous coterie of supporters, Francois Truffaut among them who considered it at the time to be the greatest American movie. 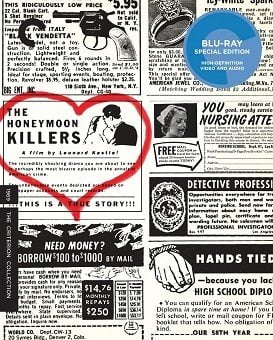 Overweight spinster Martha Beck (Shirley Stoler) has her name submitted without her knowledge to a lonely hearts club by her friend Bunny (Doris Roberts). Though angered, she quickly is drawn in by a lovely series of letters from Ray Fernandez (Tony Lo Bianco) who comes to meet her in Mobile from his apartment in New York City. Though Ray is a con-man who fleeces women of their money (marrying them if he has to in order to gain their valuables), Martha is so taken with him that she doesn’t care about his “business” and follows him to New York where they continue his scams with Martha posing as Ray’s concerned sister. A series of women are conned by the couple, jobs that would have gone much more smoothly if Martha weren’t so violently jealous whenever Ray gets too close to the intended victims. Their first mark together (Barbara Cason) is allowed to escape, but at least three others: Myrtle Young (Marilyn Chris), Janet Fay (Mary Jane Higby), and Delphine Downing (Kip McArdle) are killed after being fleeced by the couple.

Both writing and then taking the directing chores over after a few weeks (from, of all people, Martin Scorsese), Leonard Kastle does a fine job telling the story chronologically and allowing us to get to know both Martha (who as a head nurse runs a very tight hospital ward) and the outwardly charming and muscular Ray (who has no problem with bedding the women in order to con them before Martha puts her foot down) before their serial romancing and killing spree begins. Aided by outstanding cinematographer Oliver Wood, this low-budget film often looks brilliantly sophisticated with creative scenes shot from low angles (a basement scene is beautifully lit and shot), a striking montage of letters written back-and-forth between the two protagonists, and a very chic segue from a photograph of a Long Island suburban home to being at the actual place without an obvious cut. Apart from the hammer and strangulation murder of Janet Fay which is quite brutal, care has been taken to show just enough of the killings to get the point across to the audience. Yes, because of the low budget, retakes weren’t a common occurrence so we see microphone shadows occasionally on walls and a close-up on the poisoned Myrtle Young doesn’t cut away fast enough in order to hide from us her tongue pulsating.

This strange true-life love story comes to life through the excellent performances of Shirley Stoler and Tony Lo Bianco. His Transylvanian-style accent is a bit odd (Fernandez was Spanish), and she isn’t someone one would normally peg as a Southern woman, but those are trifles. Her unbridled love and harpy-like jealousy and his sleazy ease with women join together nicely making for a very believable pair of con artists. Doris Roberts as best friend Bunny and especially Dortha Duckworth as Shirley’s aging mother make vivid impressions early-on before disappearing completely from the movie. Each of the women chosen for the separate con operations acts wonderfully with Marilyn Chris’ Southern fried accent and Mary Jane Higby unsure matron (the oldest of Ray’s marks in the movie) particular stand outs.

The film’s original theatrical aspect ratio of 1.85:1 is faithfully reproduced in 1080p resolution using the AVC codec. Though a low budget film, sharpness is quite wonderful throughout the presentation with Shirley Stoler’s freckles vivid enough to count in close-ups. The grayscale is good rather than great with crisp whites but black levels that vary from fair to very good. Contrast has been consistently applied to the image. Age-related problems with scratches and dirt are non-existent. The movie has been divided into 20 chapters.

The PCM 1.0 (1.1 Mbps) sound mix is typical of an uber-low budget movie of its era. Lacking almost anything in the low end of the sound spectrum, the soundtrack has been cleaned up terrifically with the dialogue coming across clearly and never compromised by ambient sound effects or the various Gustav Mahler themes that serve as the background score.

Leonard Kastle Interview (29:38, HD): filmed in 2003 for the Criterion DVD release of the movie, the writer-director discusses how he came to make the film with a budget of $150,000 and his memories of working closely with the actors in the evenings rehearsing so they wouldn’t need multiple takes the next day when shooting and his experiences with producer Warren Steibel and cinematographer Oliver Wood.

Love Letters (24:59, HD): interviews recorded in 2015 with actors Tony Lo Bianco and Marilyn Chris as well as editor Stan Warnow as they share memories of working on the movie.

Dear Martha (22:56, HD): a video essay by author Scott Christianson which compares and contrasts the events of the movie with the real-life stories of Martha Beck and Ray Fernandez.

Enclosed Pamphlet: contains a cast and crew list, information on the transfer, and author-critic Gary Giddins’ 2003 essay on the film, its participants, and its afterlife.

The Honeymoon Killers comes to Blu-ray in an edition that cleans up and smooths out the previous DVD release of the film. It’s a small gem of biographical crime drama, and for those interested in one of the more unusual serial murder rampages of the 20th century, well worth seeing. Recommended!

Never saw this. It sounds fantastic.

Both a camp classic and a horror film - a real life horror story released just in time for Halloween. Shirley Stoler of Pee Wee's Playhouse is superb-

I cannot wait to see this 4K digital restoration.

There's nothing camp about the film. Weirdly funny, but no camp, like Rocky Horror.

Bob Cashill said:
There's nothing camp about the film. Weirdly funny, but no camp, like Rocky Horror.
Click to expand...

On second thought you're absolutely right. Very few things are weirdly funny but this certainly is.
You must log in or register to reply here.