Splitting J.R.R. Tolkien’s The Hobbit, a book that is shorter than the shortest book in the Lord of the Rings trilogy, into three movies may seem like stretching the story too thin. That was the case of The Hobbit: An Unexpected Journey. Peter Jackson’s second film in the series, The Desolation of Smaug, helps to erase the disappointment in the first film by giving the audience almost non-stop action. This extended edition deepens the characters and storyline, and adds a wealth of special features sure to delight fans of both the series and movies in general. 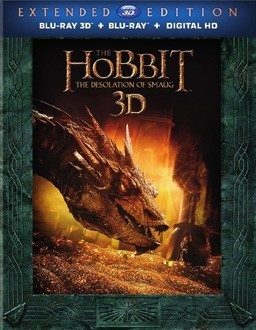 As we last left our troupe of travellers, Gandalf (Ian McKellen), Bilbo (Martin Freeman), and Thorin (Richard Armitage), along with his band of dwarves, are being hunted by Orcs as they journey to reclaim Erebor. At Gandalf’s insistence, they seek shelter for the night at the home of Beorn, a skin changer who doesn’t much care for dwarves. Since he detests Orcs even more than dwarves, he loans them ponies and horses so they can continue their trek while Beorn tries to hold the Orcs at bay. The troupe arrives at Mirkwood, but Gandalf receives a vision from Galadriel (Cate Blanchett) to leave the dwarves and head to Dol Guldur, a castle fortress where the Necromancer has taken up residence. Bilbo and the dwarves continue on through Mirkwood, a haunted forest overrun by giant spiders, and are eventually saved by Wood-Elves Tauriel (Evangeline Lilly) and Legolas (Orlando Bloom), only to be taken prisoner by them. Bilbo, with help from the ring, breaks the dwarves out of prison, only to be chased by Orcs (in a thrilling chase in barrels down the rolling rapids). Bilbo, Thorin, and the dwarves eventually make it to Erebor, sending Bilbo on his quest to steal the Arkenstone, which is hidden inside the chamber of a sleeping dragon, Smaug (voiced by Benedict Cumberbatch), perhaps one of the most realistic dragons ever created for a film since Dragonslayer.The theatrical cut of The Hobbit: The Desolation of Smaug was a thrilling ride from start to finish, starting with a flashback sequence where Gandalf and Thorin meet for the first time at a pub in Bree, essentially bringing the audience up to speed from the previous entry. Extended editions of movies that are already well over two hours has the potential to bog a movie down with its additional sequences, slowing the pace of a good film. That is not the case with this Extended Edition, which adds 24 minutes of footage, bringing the running time to just over three hours. Much of the new footage consists of a subplot with the capture and incarceration of Thorin’s father at Dol Guldur; an alternate (and humorous) version of Beorn meeting Gandalf, Bilbo, and the dwarves; an alternate journey through Mirkwood; and various scene extensions. These all flow quite smoothly, and are never distracting or slow the pace of the film, often adding to the richness of the story and character development. For those familiar with the theatrical cut, this extended version never feels longer. The 3D version is spread over two discs (much like the theatrical cut), with the disc change coming at a nice intermission break. The 2D version is contained on one disc.

The overall video quality of the extended edition mirrors that of the theatrical cut, with excellent color reproduction (even if it was tweaked during post production) as well as detail. Blacks are nice and inky, while whites are often bright but never clip. Although shot in native 3D at 48 fps, Smaug has a much more film-like appearance than its previous entry, An Unexpected Journey, which often looked too much like it was shot on digital video (which all three Hobbit films were). The 2D version is on one BD50 disc (as noted above), and presents the film in 1080p with its intended 2.40 theatrical aspect ratio, using the AVC codec.The 3D version is spread over two discs (as noted above) to maximize bitrates, and also mirrors the 3D version of the theatrical cut, using its 3D more for a sense of scale and depth rather than relying on gimmicky pop-outs (although there are a few instances of swords and such breaking the plane, resulting in what I like to refer to as the flinch test). This becomes even more evident when Bilbo enters Smaug’s chamber, and we (the audience) realize not only how large the chamber is, but how enormous Smaug is when he eventually fills the frame. Ghosting and crosstallk was virtually non-existent on my Samsung 60F7100, especially after adjusting the 3D settings on the TV and using XpanD Universal RF 3D glasses rather than Samsung’s included battery-operated ones.

The 7.1 DTS-HD Master Audio track is another go-to disc to demo my sound system, even folded down to 5.1 by my Marantz SR5008 receiver. The action sequences are immersive, with excellent placement of discrete surround effects and a very aggressive low-end (especially when Smaug speaks) that will give your subwoofer a good workout. Even with such an aggressive mix, dialogue remains clear and understandable, never getting drowned out by sound effects or music.

As a moviegoer, I had almost written off Peter Jackson’s attempt at bringing The Hobbit to the big screen after the disappointing first film, An Unexpected Journey, due to its slow pacing. The Desolation of Smaug, in its theatrical form, was a complete 180 from that first film, a truly engaging experience. The extended cut of Smaug is just as entertaining, perhaps more so, with its deeper character and story development that never slow the film down. The 3D presentation is just as immersive as the theatrical cut, with much of the same clarity and richness. The special features included in the extended cut will please any fan of Peter Jackson, movie making, and the Hobbit and LOTR series. Recommended.

The break on the theatrical 3-D edition of the film sucked; a dwarf pops up out of toilet, begins to say something, and is basically cut off before he's really finished speaking. Glad to hear it is better handled this time.

While on the one hand, I loved the EEs of the LOTR movies, I can't imagine wanting more of these films. But that's just me.

I saw the trailer this weekend for the upcoming Hobbit movie and leaned over to my son and said I can't even remember how the last film ended and that I'd need to brush up on it again before seeing the next. The narrative in these Hobbit films just isn't staying with me like the LOTR films.

This film went on far too long in its original form-especially when Bilbo is introduced to Smaug. I can't imagine sitting through more of it.

I want to see the finale but friends tell me it is headache inducing with one battle after the next. Hopefully all three get edited into one 5 hour film- like the original book. A major disappointment for me unfortunately.

The Extended edition restore 2 sequences that are very much needed to fully understand 2 characters so its a big improvement. It also restores the wandering in the woods scene that many fans of The Hobbit book love and wanted to see.

Since it was not based on just the Hobbit but: the Hobbit, portions of The Unfinished Tales and The LOTR Appendices a one film edit trying to make it just like one book does not work since the film was not based on one book to begin with. Fans have already tried it online and the results are a disaster.


noel aguirre said:
This film went on far too long in its original form-especially when Bilbo is introduced to Smaug. I can't imagine sitting through more of it.

I want to see the finale but friends tell me it is headache inducing with one battle after the next. Hopefully all three get edited into one 5 hour film- like the original book. A major disappointment for me unfortunately.
Click to expand...