The Hobbit: The Desolation of Smaug Blu-ray Review

The latest installment of Peter Jackson’s cinematic adaptation of J.R.R. Tolkien’s The Hobbit picks up immediately where the first one left off and improves on its predecessor in many ways. Those familiar with the release pattern of the previous film know that an extended edition with copious extras is mere months away. Those familiar with the film’s production history know that the film is a “killer app” for 3D exhibition. That being established, users interested in the original theatrical cut who either dislike or have no access to 3D home exhibition equipment are people too, so let’s explore what this release has to offer them. 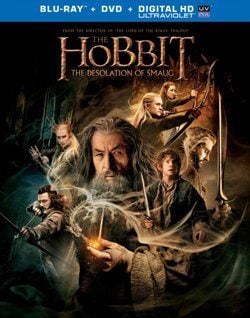 Standard size Blu-ray case with double hub spindle on one side to accommodate three discs with the two Blu-rays stacked. Hard case wrapped in a foil-enhanced cardboard slipcover

The Hobbit: The Desolation of SmaugDirected by: Peter JacksonStarring: Ian McKellen, Martin Freeman, Richard Armitage, Orlando Bloom, Evangeline LIlly, Lee Pace, Cate Blanchett, Benedict Cumberbatch, Mikael Persbrandt, Sylvester McCoy, Luke Evans, Stephen Fry, Ken Stott, Graham McTavish, William Kircher, James Nesbitt, Stephen Hunter, Dean O'Gorman, Aidan Turner, John Callen, Peter Hambleton, Jed Brophy, Mark Hadlow, Adam BrownThe Hobbit: The Desolation of Smaug is the second of three planned film's in Peter Jackson's cinematic adaptation of J. R. R. Tolkien's The Hobbit. After a brief prologue dramatizing the first meeting between Wizard Gandalf the Grey (McKellen) and Dwarf Thorin Oakenshield (Armitage), the film picks up immediately after the events of The Hobbit: An Unexpected Journey and literally hits the ground running. The band of thirteen Dwarves led by Thorin, Gandalf, and Hobbit Bilbo Baggins (Freeman) is being pursued by a vicious band of Orcs from whom they narrowly escaped at the conclusion of the previous film. Their efforts to survive and fulfill their quest to liberate a large treasure buried deep inside a mountain that was the former royal seat of Thorin's father from a dragon find them at odds with the aforementioned Orcs and crossing paths with a number of colorful characters. Among these new characters are a skin-changer named Beorn (Persbrandt), Wood-Elf king Thranduil (Pace), Thranduil's son Legolas (Bloom), Sylvan Elf Tauriel (Lilly), a human barge-man named Bard (Evans), the human Master of Laketown (Fry), and ultimately, the dragon Smaug (Cumberbatch). After narrowly escaping the orcs, their efforts to reach the mountain are complicated when Gandalf must leave the company and enlist the aid of fellow Wizard Radagast (McCoy) on a parallel quest to investigate tidings of a rising dark force known as The Necromancer.For a movie with no real beginning and a cliffhanger for an ending, Peter Jackson's The Hobbit: The Desolation of Smaug is a surprisingly enjoyable cinematic experience. Free of the burden of The Hobbit: An Unexpected Journey to introduce fifteen major protagonists and get them on their way, the second film in the series moves along like a house on (dragon) fire from set-piece to set-piece maintaining a steady plot and character momentum.One of the film's chief advantages is that it contains many of the most memorable episodes from the source novel including the introductions of a (reasonable) number of colorful characters. Even the extra bits invented by Jackson and co-screenwriters Fran Walsh and Philippa Boyens involving Legolas and Sylvan Elf Tauriel manage to keep the trajectory of the plot moving towards the ultimate goal of reaching the treasure-laden Lonely Mountain and the dragon Smaug.The extra post-production time compared to the first film (bolstered by ten weeks of pick-ups for this film and the forthcoming third film in the series) shows in both improved visual effects and a slightly more refined editorial style that enhances both the performances of the actors and the film's overall pace.This momentum is interrupted only by a side-quest involving Gandalf and fellow Wizard Radagast investigating an evil force that will be familiar to fans of Jackson's Lord of the Rings films. It makes for some cool sequences and shores up a somewhat flimsy excuse from the novel to remove Gandalf from the proceedings for several pages, but it also marks the point where viewers are likely to become most keenly aware of the film's two and a half-hour plus running time.

"The Hobbit: The Desolation of Smaug" Trailers

"The Hobbit: The Desolation of Smaug" TV Spots

The AVC encoded 1080p presentation presents the film in its intended 2.4:1 theatrical aspect ratio. It offers a flawless 2D home video representation of the film, which was shot and rendered natively in 48 fps digital 3D. The color palette is heavily manipulated and frequently unnatural, consistent with the filmmakers' intent and with the prior entry in the series. Digital artifacts are few and far between, aided no doubt, by the decision to spread the film out across a BD50 disc with no promotional trailers and only a brief featurette as an extra.As was the case with the films in Peter Jackson’s Lord of the Rings series, the CGI shows a marked improvement over the first film in the series. While there are still a good number of “uncanny valley” moments with digital creatures and landscapes, they are fewer and less distracting than in The Hobbit: An Unexpected Journey. Curiously, one of the more distracting uses of CGI is to add visible breath to various characters speaking outdoors in Lake-town. In summary: dragon rampaging through treasure caverns = improbably convincing. Digital breath = weirdly distracting.

The primary audio track is a lossless DTS-HD MA 5.1 track that renders an impressively three dimensional experience with clever and aggressive use of all 5.1 channels. Surprisingly for a lossless track, the musical score is not rendered with the degree of fidelity that I have come to expect from the best lossless encodings on Blu-ray. It seems to have been dynamically compressed at some point between the mixing and mastering of the film’s soundtrack on disc. I did not see the film in theaters, so I cannot say whether this was a characteristic of the original theatrical mix as well.

Special features are presented in 16:9 high definition video English Dolby Digital 2.0 with available subtitles in English SDH, French, Spanish, and Portuguese unless otherwise indicated below. The lion’s share of the features appear on the 2nd Blu-ray disc, but Disc One includes a single featurette.Disc OneNew Zealand: Home of Middle Earth, Part 2 (7:11) As with Part 1 on the Blu-ray of the previous film in the series, this featurette is part location featurette and part promo for New Zealand tourism, skewing more towards the former than the latter. On-camera comments about the diverse and spectacular New Zealand locations come from Orlando Bloom (“Legolas”), Supervising Location Manager Jared Connon, Adam Brown (“Ori”), Director of Photography Andrew Lesnie, William Kircher (“Bifur”), Stephen Hunter (“Bombur”), Martin Freeman (“Bilbo”), Mark Hadlow (“Dori”), Graham McTavish (“Dwalin”), Richard Armitage (“Thorin”), Peter Hambleton (“Gloin”), Jed Brophy (“Nori”), Mikael Persbrandt (“Beorn”), John Callen (“Oin”), Dean O’Gorman (“Fili”), Ian McKellen (“Gandalf”), Luke Evans (“Bard/Girion”), Director/Writer/Producer Peter Jackson, and Evangeline Lilley (“Tauriel”). Disc TwoFeaturettesPeter Jackson Invites You to the Set (40:36 with “Play All”) is a two-part collection of behind the scenes featurettes. For casual fans, they I See Fire Music Video (5:42) features footage of musician Ed Sheeran in the studio recording the song blended with movie clips and shots of other musicians and producers. The behind the scenes aspect makes it a cut above most such promo video clips.Live Event: In the Cutting Room (37:52) is an archival recording of a March 25, 2013 live event in which Peter Jackson gave fans around the world a tour of his post-production facility and conducted a live Q&A. Think of it as something like a Middle Earth Town Hall. It is introduced by actor Jed Brophy who quickly hands things over to Jackson. Departments visited include the motion capture stage, editorial, and pre-visualization. It includes pre-recorded greetings to fans recorded by actor Luke Evans, Stephen Fry and Orlando Bloom. More than half of the running time is dedicated to the fan Q&A, with questions submitted via YouTube and Twitter interspersed with clips providing sneak peeks of the second film and its new characters covered by narration by Jackson.Production Videos (36:42 with “Play All”) Continuing on from the ten production videos included in the Blu-ray release of the theatrical cut of The Hobbit: An Unexpected Journey, this release contains the next four entries in the series originally released on the films’ web site and YouTube page. TrailersA generous collection of theatrical, video, and game trailers is provided. The three Desolation of Smaug trailers can be viewed either individually or via a “Play All” function (7:45)SD DVDThis Blu-ray combo pack includes a standard definition DVD of the film presented with 384kbps Dolby Digital 5.1 sound in English, French, and Spanish and subtitles in English SDH, French, and Spanish. The only extra on the disc is the same New Zealand: Home of Middle Earth Part 2 featurette that appears on Blu-ray Disc One.Ultraviolet Digital CopyAn insert in the packaging includes a code to unlock an Ultraviolet Digital Copy of the movie. Using the code to redeem the digital copy allows the viewer to access high definition streaming versions of the movie on portable devices, smart TVs, and set-top boxes connected to streaming services such as Flixster, Vudu, CinemaNow, Target Ticket, and M-Go.

The Hobbit: The Desolation of Smaug - Ed Sheeran "I See Fire"

Peter Jackson's The Hobbit: The Desolation of Smaug takes advantage of the lack of need for set-up, introductions, or a conclusion to present a nicely paced spectacle of enjoyable set-pieces. While not as satisfying as a complete story would be, it manages to keep viewers engaged, entertained, and likely excited for the forthcoming third and final entry in the film series. Its is presented on 2D Blu-ray with outstanding video and audio that makes impressive use of the 5.1 surround field but does not quite reach the levels of fidelity of the best modern lossless encodings.Extras are numerous and of decent depth, but likely just a taste of what fans will be treated to when the inevitable extended edition is released months later.

There was also a complaint about the audio of the first film, in particular the low down bass response, they fixed it for the extended edition, maybe they will improve the audio again, if enough of us complain, when the longer cut comes out later in the year. I think this also goes to show that lossless audio doesn't mean much if they dynamically compress the soundtrack.

Dynamic compression-wise, it is not nearly as gruesome as the 2002 DVD release of Lord of the Rings: The Fellowship of the Ring, but it is noticeable enough to make the score passages sound less than "hi-fi".

I enjoyed this film a lot more than the first one. I ended up preordering the 3D version. need to rewatch the original trilogy now

Thanks for representin'!
You must log in or register to reply here.