The Hobbit: The Desolation of Smaug 3D Blu-ray Review

Fantasy action and adventure step up a notch in Peter Jackson's second chapter of the Hobbit trilogy, The Hobbit: The Desolation of Smaug. Director Jackson's experience in filming 3D features elevates what is a very good film in 2D into a fantastic experience in 3D. The Hobbit: The Desolation of Smaug satisfies expectations and should whet every fan's anticipation for the final chapter. 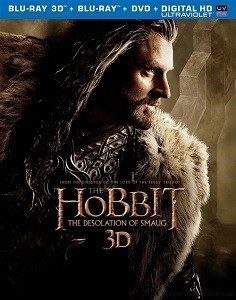 Bilbo Baggins(Martin Freeman), Gandalf the Grey(Ian McKellen), and their band of dwarves led by Thorin Oakenshield(Richard Armitage) continue their quest to reclaim the dward kingdom of Erebor. In this chapter, they meet Beorn the shape-changer, Bard of Lake-town, and the wood elves Thranduil(Lee Pace), Legolas(Orlando Bloom), and Tauriel(Evangeline Lilly), and they struggle to survive the giant spiders of Mirkwood Forest leading up to their confrontation with Smaug the dragon.The Hobbit: The Desolation of Smaug does not suffer from what some fans complained of as the somnolent pace of the first film. Events happen at a fairly brisk pace throughout the film, as much of the substance of the novel by J.R.R. Tolkien, on which this film is based, is packed into this chapter of the trilogy. Even at a running time of slightly over 2 and a half hours, The Hobbit: The Desolation of Smaug is a lean film in the sense that there is little footage, if any, that can be considered extraneous or redundant. This chapter unravels at a hectic pace and builds the viewer's anticipation for the final chapter.

The Hobbit: The Desolation of Smaug is presented in its original aspect ration of 2.4:1 in 3D and 2D. The 3D version is spread out over 2 discs, with separate discs for the film in 2D and special features, respectively. The fifth disc is the DVD version of the film.The level of depth in the 3D stereo window is amazing. Actors, objects, and background appear in multiple planes, which is only enhanced by Jackson's directing style of constantly moving camera, which allows objects to appear and disappear gradually from view, highlighting the level of depth perception on all planes. The latter half of the film has many of what we could consider "the money shots" of 3D with Smaug the dragon pursing our heroes and spraying fire at every 3rd dimensional angle.The presentation of this film is flawless. Black levels are solid with excellent shadow detail and fine contrast. Grain is minimal, and the color timing of the film demonstrates a deliberate creation of otherworldly color, tending towards pale in flesh tones, to complete that illusion of Middle-earth brought to life. I would not describe the colors as vibrant, at least not in the traditional sense, but this transfer is faithful to the cinematic presentation, and any paleness in flesh tones is attributable to artistic choices rather than defect in presentation.

The film is presented in English in 7.1 DTS-HD Master Audio, which provides a rich, aural experience for the film, from the orchestrations by Howard Shore to the sound effects. Directional audio is employed extremely well in conjunction with rotating camera movements to create the level of immersion a viewer aspires to in this type of film. Dynamic range in presentation is demonstration level, with dialogue almost always audible appropriately over music and sound effects.

The special features are included on a separate disc for the most part, with a few special features included on the same discs as the theatrical presentation.The Special Features disc is divided into 3 categories, consisting of Featurettes, Production Videos, and Trailers. Each chapter may be watched individually or with a "Play All" function, and include all of the following:Featurettes - Peter Jackson Invites You To The SetIn The Company Of The Hobbit(18:10): A morning on the Hobbit set: The predawn crew calls, actors being made up, scene blocking and shooting in Thranduil's realm and Dale, and lunchtime celebrations.All In A Day's Work 22:25 An afternoon on the Hobbit set: A visit to the actors' trailers, a webbing demonstration, the Mirkwood spider fight, the attack in Bard's house, and end of day festivities.I See Fire music video (5:42): Performance by Ed Sheeran.Live Event: In The Cutting Room(37:42): Archival version of the live event from March 2013 in which Peter Jackson gave fans a tour of his production facilities and answered questions from across the globe.Production VideosProduction Video #11 - Introduction to Pick-Ups Shooting July 2, 2013(9:06): This featurette covers pick-up shooting for films 2 and 3 at Stone Street Studios.Production Video #12 - Recap of Pickups Part 1 November 5, 2013(8:20): Splinter unit director Christian Rivers and Lee Pace as Thranduil, with stunt work by Orlando Bloom and Evangeline Lilly, and the necessity of "plane spotting" in filming.Production Video #13 - Recap of Pickups Part 2 December 5, 2013(8:46): Martin Freeman displays his ping pong abilities, showcase of Smaug's lair, and Stephen Fry as the Master of Lake-town.Production Video #14 - Music Scoring(10:28): A visit with Howard Shore at his composing studio and his new themes developed for this film.TrailersTrailer #1(2:11)Trailer #2(2:32)The Hobbit: The Desolation of Smaug preview(3:01)The Hobbit: An Unexpected Journey Extended Edition trailer(1:33)Lego The Hobbit game trailer(1:43)The Hobbit: Kingdoms of Middle-earth game trailer(1:06)3D Trailers are also included on Disc 2 of the 3D film:The Hobbit: An Unexpected Journey teaser(2:33)The Hobbit: An Unexpected Journey trailer(2:11)The Hobbit: The Desolation of Smaug teaser(2:32)The Hobbit: The Desolation of Smaug trailer(2:32)