The Hobbit: The Battle of the Five Armies 3D Blu-ray Review

Peter Jackson’s Middle-earth saga comes to a thrilling conclusion with The Hobbit: The Battle of the Five Armies, serving as both a wrap-up of The Hobbit trilogy, but also creating a bridge to the director’s Lord of the Rings trilogy. 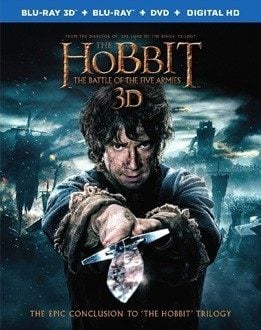 Unlike the previous entry, The Hobbit: The Desolation of Smaug, which included a tacked on prologue to refamiliarize viewers of what occurred in The Hobbit: An Unexpected Journey, the final entry, The Hobbit: The Battle of the Five Armies gets right to the point and picks up almost exactly where the previous film left off, with Smaug (voiced by Benedict Cumberbatch) burning Laketown to ashes while the citizens flee for their lives. As Thorin (Richard Armitage) and his band of dwarves view the destruction from Erebor with Bilbo (Martin Freeman), Bard (Luke Evans) reclaims his destiny by striking down Smaug and saving the villagers, who take refuge in the deserted town of Dale along the shores of the lake. But the gold within the mountain is sickening Thorin’s mind, driving him mad with envy and rage, so much so that when Thranduil (Lee Pace) arrives with an army of elves to both offer aid to the Laketown refugees and reclaim a white gem necklace hidden inside the mountain that once belonged to him, Thorin would rather go to war than share in the wealth that he had promised.

Meanwhile, Gandalf (Ian McKellen) is still imprisoned by the Orcs at Dol Goldur, and is eventually freed by Galadriel (Cate Blanchett), with assistance from Elrond (Hugo Weaving), Saruman (Christopher Lee), and Radagast (Sylvester McCoy), but at a great cost to Galadriel. Knowing what the Orcs are up to, Gandalf rushes back to Dale to warn Bilbo, Thorin, Thranduil, and Bard of what’s to come. This all leads to a defining moment in Middle-earth, with Sauron taking his first strike against dwarves, elves, and mankind with an all-out battle.

As a movie, The Hobbit: The Battle of the Five Armies works exceptionally well, with engaging battle sequences and a brisk pace that keeps the audience entertained and engaged in the storyline. Those battle sequences, however, do not top the technical achievement of those in Peter Jackson’s previous Middle-earth films, The Two Towers and The Return of the King from The Lord of the Rings trilogy. The movie does succeed in tying up the loose ends from the previous Hobbit films, including the Romeo and Juliet love affair between Kili (Aidan Turner) and Tauriel (Evangeline Lilly), and sets up story threads that continue in The Lord of the Rings.

The overall video quality provides excellent color reproduction (even if it was tweaked during post production) as well as detail. Blacks are nice and inky, while whites are often bright but never clip. Although shot in native 3D at 48 fps, Battle has a much more film-like appearance than the first entry, An Unexpected Journey, which often looked too much like it was shot on digital video (which all three Hobbit films were). The 2D version is on one BD50 disc (as noted above), and presents the film in 1080p with its intended 2.40 theatrical aspect ratio, using the AVC codec.

The 3D version is spread over two discs (as noted above) to maximize bitrates, using its 3D more for a sense of scale and depth rather than relying on gimmicky pop-outs (although there are a few instances of swords and such breaking the plane, resulting in what I like to refer to as the flinch test). Ghosting and crosstallk was virtually non-existent on my Samsung 60F7100, especially after adjusting the 3D settings on the TV and using XpanD Universal RF 3D glasses rather than Samsung’s included battery-operated ones.

The 7.1 DTS-HD Master Audio track is another go-to disc to demo my sound system, even folded down to 5.1 by my Marantz SR5008 receiver. The action sequences are immersive, with excellent placement of discrete surround effects and a very aggressive low-end that will give your subwoofer a good workout. Even with such an aggressive mix, dialogue remains clear and understandable, never getting drowned out by sound effects or music.

New Zealand: Home of Middle-earth, Part 3 (1080p; 7:11): Accessible from disc one of the 3D version and disc three (which contains the entire 2D version). The featurette is basically a promo for tourism in New Zealand, masquerading as a documentary on the filming locations for The Hobbit: The Battle of the Five Armies.

Disc Four:
Recruiting the Five Armies (1080p; 11:39): A look at the extras hired to play Dwarves, Elves, Orcs, and townspeople for the epic battle sequences.

Completing Middle-earth: A Six-Part Saga (1080p; 9:54): A look at the narrative threads and connections the filmmakers wove into The Hobbit and The Lord of the Rings trilogies to make them one complete, cohesive story.

Completing Middle-earth: A Seventeen-Year Journey (1080p; 8:59): Follows the 17-year journey the filmmakers undertook to bring Middle-earth to the screen.

The Last Goodbye: Behind the Scenes (1080p; 11:18): A look at the writing and recording of the final end credit song.

As a moviegoer, I had almost written off Peter Jackson’s attempt at bringing The Hobbit to the big screen after the disappointing first film, An Unexpected Journey, due to its slow pacing. The Desolation of Smaug, in its theatrical form, was a complete 180 from that first film, a truly engaging experience, as is this final film, The Battle of the Five Armies. The special features are rather bland, but that has always been the case with the theatrical versions of the Middle-earth films, with the wealth of bonus materials arriving on the extended versions. The 3D is more about providing an epic scope and depth to the story rather than adding any gimmickry, so those looking for popout may be somewhat disappointed. This release is more for the casual fan and the completists (who must own every version and want ALL of the bonus materials). True fans will likely want to wait for the Extended Edition to be released later this year.

This third Hobbit is priced $10 higher MSRP than the first two. Which translates to in-store prices that are $24.99 and higher.


This will eventually drop under $19.99 (or I'll get it for under $20 at a Barnes & Noble sale with a coupon too). I can wait, even it if takes a year or more. It gives me more time to watch the first two Hobbit movies again.

I am sure that the second 3D blu-ray disc is contributing to the higher MSRP - at least for the version reviewed here.

I pre-ordered from Target, the 2D for(I think)$23. Hitting my porch today.

Pre-ordered with MJ1 for free shipping.

Just watched this after having missed it in the theaters (I saw the previous two in HFR 3D, and TLOTR all theatrically, as well as home/extended versions for all 5 previous films). I do agree with the high A/V scores. Another reference-grade blu-ray transfer, as we have come to expect for these films.


That said, and I know this isn't the "film review" thread, but I will say that while the action is fast-paced, I didn't find that translating to a fast-paced film. In fact, the last hour felt like one long (albeit fast-cut/edited) battle sequence...which it was. I'm sorry, but I got battle fatigue watching it. It's only 2h24m, but it felt longer than some of the 3+ hour EEs of previous films. PJ essentially dispenses with any notion of character development in this film, except for the forced-romance between Fili and Tauriel, which not only feels out-of-place, but unauthentic as well. I get that Tolkien doesn't write female characters well, it's been a longstanding criticism. But if you're going to try and make one up out of thin air, at least do a good job with it, and I felt the filmmakers did not.


Maybe I'm in the minority. Maybe a lot of young female viewers will watch this and want to grow up to be Tauriel. But I don't see a lot of young girls in the early 2000s idolizing Padme (another badly written female lead in a fantasy saga) and I doubt I'll see that here. They all want to be Elsa and Anna, who are two much better written female characters IMO.

I think that the GGI in the Hobbit films is much than in the LOTR films. Some of the broader shots in Two Towers especially really lack detail. ROTK benefited a lot from Tokein's already terrific imagery, but that doesn't mean the CGI was better. Unquestionably, the great CGI achievement of the Hobbit films is the dragon (aided a lot by Benedict Cumberbatch). Smaug is more than a monster and unforgettable.

Hmm. So what does this mean? A re-release of the LOTR trilogy, but with the effects redone to a higher level of detail? Eminently possible, given that the files are probably mostly digital. My guess? They will re-release all six files re-done in 4K, maybe even all in 3D, and for a whopping MSRP, say, $199.99. What price completism now, eh? I will be bankrupted, ruined, flattened.
You must log in or register to reply here.

Tuesday at 7:28 AM
Robert Crawford