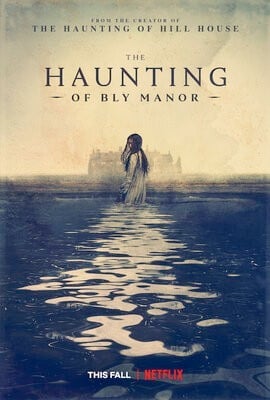 Rather than tell a continuing multi-season story, Netflix and Mike Flanagan have opted to use "The Haunting" branding to make an anthology of separate miniseries centered around different haunted houses. The first season was inspired by The Haunting of Hill House by Shirley Jackson, arguably the most famous haunted house novel of all time. This second season adapts The Turn of the Screw by Henry James, moving the bulk of the action from the mid-19th century to 1987.

I'm at the halfway point and really enjoying it. Victoria Pedretti, so terrific as Eleanor Vance in Hill House, is really great in a completely different way here as the governess whose story forms the spine of the season. She utilizes a Midwestern accent this season which makes her character very easy to underestimate.

It's far less creepy than the first go-round -- and all other adaptations of The Turn of the Screw that I've seen -- but that's not really a criticism. Hill House was actively malevolent, a force to be reckoned with, while Bly Manor itself feels pretty neutral. The bones of the plot are far more faithful to the source material than "Hill House" was, but the feel is very different than James's novella. The core group of characters are, for the most part, really decent people. There's a warmth and camaraderie here that was not present in the first season. The treatment of Miles and Flora is particularly well done; instead of being creepy for the sake of being creepy, they feel like real kids reacting in sane ways to extraordinary circumstances. Flora, in particular, understands what's going on better than most of the adults. And utilizes her insider knowledge in really useful and intelligent ways.

While this is set in the English countryside, and features a predominantly British cast, it was shot in Vancouver. So much of the show takes place inside of Bly Manor and on its grounds that having to fake period England is less of a problem than it might at first seem.
Last edited: Oct 30, 2020

May have to take a pass on this. My main fault with THHH was that it needed half the family drama and twice the ghosts. If this is even less creepy than THHH, I don't think I'd enjoy it.

It WAS far less “creppy” and “spooky” than Hill House, but in all other ways it is excellent. I look forward to more seasons, whatever they may be. I would like one every year rather than two, but I guess I’ll just have to take what I can get.

Finished it tonight, and really enjoyed it.

One of the things that I admire most about both "Hill House" and "Bly Manor" is how well structured they are. They really do have a beginning, a middle, and an end. There's never a moment when the show doesn't feel like it knows where it's going yet. The payoffs all feel earned, and well set up ahead of time. Any happiness at the end is earned with real and meaningful sacrifice.

Assuming they keep to the every-other-October release pattern, I wonder what story will be adapted for Halloween 2022?

I really enjoyed this series tho not as much as the first one, which I thought was the scariest tv show ever made.
You must log in or register to reply here.