An aging Sean Penn tries his hand at action in The Gunman, an often confusing and unoriginal political thriller from Pierre Morel, the director of Taken, and producer Joel Silver (best known for the Lethal Weapon series and other action hits from the late 1980s and 1990s), who removed his name (but not his production company) from the finished product. 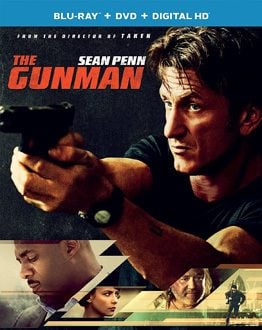 Jim Terrier (Sean Penn) is a hit-man, part of a team of mercenaries working for a corporation in the Democratic Republic of the Congo. When he is hired to assassinate the Minister of Mining, he is forced into hiding, leaving his girlfriend, Annie (Jasmine Trinca), behind to continue her humanitarian efforts as a healthcare provider alone. The group’s leader, Felix (Javier Bardem), and Terrier’s friend, agrees to look after Annie. Eight years pass, and Terrier finds himself back in the DRC doing humanitarian work, digging wells, until one day he is ambushed by a group of thugs that, fortunately, Terrier is able to take out quite easily. He flees to London to meet up with his mentor, Stanley (Ray Winstone), who warns him to stay low, especially after it is discovered that Terrier is suffering from a build-up of plaque in his brain due to repetitive head injuries, and is told to refrain from stressful situations, strenuous activity, and loud noises. Of course, Terrier is going to ignore this advice, and proceeds to hunt down and uncover who is after him and why. Idris Elba has a small but important role as the INTERPOL agent investigating the assassination, while Mark Rylance plays the executive, Cox, behind the whole conspiracy.

The Gunman has all the right ingredients to make an exciting action thriller, including a talented cast, a producing team that has made some of the best action films of the last few decades, and a director that stunned the international box office with Taken (which went on to spawn two sequels and continue to make Liam Neeson a bankable action star). Those ingredients, however, never quite bake into something remotely interesting or original. The screenplay, credited to Don MacPherson (1998’s The Avengers), Pete Travis (Vantage Point), and Sean Penn, is a muddled mess, never really explaining why the assassination took place or why, after eight years, the company found it suddenly necessary to take out everyone involved. Most of the action sequences come off as uninspired and predictable, especially the big finale at the bull fighting arena. It was reported that producer Joel Silver was locked out of the editing room by co-producer Sean Penn and director Pierre Morel, and perhaps if Silver managed to keep control during post production, The Gunman may have been a different, perhaps better movie.

Universal’s Blu-ray of The Gunman delivers where the movie failed to, providing a near-reference quality video presentation compressed using the AVC codec, retaining the film’s intended theatrical aspect ratio of 2.40:1. Colors are vibrant and natural without appearing oversaturated. Detail is exquisite, showing off every wrinkle, crease, and muscle tone of its actors. Contrast is also exceptional, with deep blacks that never crush and bright whites that never bloom.

The disc has only one audio option, Dolby Atmos, which contains a Dolby TrueHD 7.1 core for those, like myself, that do not have Atmos playback capability (per the Blu-ray spec, a lossy Dolby Digital 5.1 track will default for those that do not have TrueHD capability). The 7.1 mix folded down nicely to 5.1, still providing some terrific use of the surround channels and LFE during the action sequences. Dialogue is directed mostly to the center channel, always intelligible and never getting lost in the mix.

Dolby Atmos Update: I watched this in Dolby Atmos using a 7.2.4 system configuration (4 in-ceiling speakers). I have mixed feelings about this Dolby Atmos mix. While I agree with what Todd said about the terrific use of the surround channels and aggressive LFE, the ceiling speakers were hit or miss. The hits: a bathroom scene where the water flowing from the shower head and some flames made convincing use of the ceiling channels. Also the crowd noise during a bull fight. The misses: There was an explosion where some debris rained down on a car where there was nothing from the ceiling speakers. In another scene someone fell through a skylight and while there was a satisfying thud as the body hit the ground in the overhead channels, there was a missed opportunity to have more debris that was falling on the screen be in the overhead channels as well. -- Adam Gregorich

There are no special features on the included Blu-ray or DVD discs.

DVD Copy: The movie in 480p with Dolby Digital 5.1 audio, plus trailers for The Loft, Black Sea, Blackhat, Seventh Son, and Chicago P.D.

Although the disc earns high marks for audio and video, the movie was a major disappointment. For fans of Morel or Penn, rent first and buy later.

I watched this today to review the Dolby Atmos mix (added to Todd's review). I agree that while this had all the ingredients to be a good movie, it just never came together into one.
You must log in or register to reply here.