If you’re in the mood for a stylishly funny and overtly precious comic romp with more than a twinge of nostalgia thrown into the mix, Wes Anderson’s The Grand Budapest Hotel will be right up your alley. Creating his own little Middle European world and peopled with some of the most charming and eccentric characters seen in many a year, The Grand Budapest Hotel is unlike anything you’ve seen since, well, the last Wes Anderson film premiered. 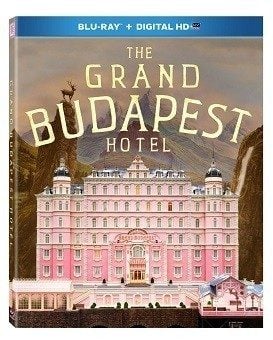 Wes Anderson’s script from a story penned by him and Hugo Guinness is actually told from two different periods of time(represented in the film by changing aspect ratios). In 1985, an author (Tom Wilkinson in 1.85:1) relates a story being told to himself as a young writer by the elderly owner of the Grand Budapest Hotel (Jude Law as the writer being told the story by owner F. Murray Abraham’s Zero Moustafa in 2.40:1) about his training in the job of lobby boy (Tony Revolori as the young Zero) and his memorable adventure with the hotel’s concierge M. Gustave H. (Ralph Fiennes) in 1932 (represented in 1.33:1 which constitutes most of the film’s photography). It seems the ever-efficient Gustave has been left a priceless painting in the will of one of his ardent female clients Madame D. (Tilda Swinton). Madame D.’s snobbish, ruthless son Dmitri (Adrien Brody) would rather die than give up anything to the fawning concierge so he has Gustave framed for his mother’s murder whereupon it becomes a mad scramble for the unjustly imprisoned Gustave to escape his captors and find some way to clear his good name.It’s an elaborate, convoluted romp (part whodunit, part prison escape film, and all comedy with some black around the edges) that Anderson has scripted with dozens of characters (many played by a succession of famous performers), rapid-fire dialogue that never stops, and a plot that marches ever forward, but the most remarkable aspect of the film is in its complete immersion into this fabricated world of the country of Zubrowka somewhere in the Alps with its own currencies, businesses, transportation modalities, political parties, and societal levels. The hotel itself is a marvel, both in its 1968 and especially in its 1932 variations, and scenes pass by so quickly and slickly that one can barely blink for fear of missing something novel or someone unexpected. In his usual manner, Anderson keeps his camera moving in frequent tracking shots in front of or behind his characters or watching them in parallel motions to their own movements. Key to the writer-director’s tone is the completely outrageous characters and situations which are all underplayed by this sterling cast giving the film its overwhelmingly droll sense of mischievous fun. The prison escape sequence is indeed hilarious (a telephone booth in the middle of nowhere is an especially quaint touch), and a succession of scenes with the Society of the Crossed Keys milks the same basic joke beautifully, but a loud and overlong shootout sequence near the film’s conclusion loses some of its comic impact through sheer exhaustion.Ralph Fiennes as M. Gustave walks away with the film in his neat little pocket handling the rat-a-tat dialogue with a sense of suave sophistication that is simply priceless (especially when he utters an occasional curse when his exasperation level reaches the breaking point). Tony Revolori makes a fine deadpan companion on his adventures always cautioning the older, more charming teacher not to flirt with his girl friend Agatha played in rather brittle fashion by Saoirse Ronan. Everyone will have his own favorites among the large supporting cast, but among the real standouts are Edward Norton as chief of police Henckels, Jeff Goldblum as will executor Kovacs, Willem Dafoe as the lethal Jopling who does the dirty work for the spoiled Dmitri of Adrien Brody, and Harvey Keitel as another prison escapee. Tilda Swinton is funny but completely unrecognizable as Madame D., F. Murray Abraham captures the hints of loss over a passing age as the elderly Zero, and Jason Schwartzman as concierge of the 1968 incarnation of the hotel has some amusing moments.

With three aspect ratios and a plethora of color timings for them (1080p resolution using the AVC codec), the film looks like no other. At its best (which is certainly most prominent in the 1.33:1 central part of the film), sharpness is exemplary, color is rich but well controlled, and black levels are outstanding. In the 2.40:1 set scenes, color is more exaggerated in its saturation levels with somewhat browner skin tones and with sharpness fine but a little less exceptional. Occasionally there is a pinkish tint to the image in the early going that is most odd. The film has been divided into 32 chapters.

The DTS-HD Master Audio 5.1 sound mix is a well balanced combination of the rapid-paced dialogue found in the center channel, split sound effects which get sent to the fronts and rears with increasing frequency given the film’s gathering action, and Alexandre Desplat unusual and involving score which gets loving treatment in the front and rear soundstages.

Bill Murray Tours the Town (4:17, HD): cameo performer Bill Murray offers a brief tour of the hotel set and the German town of Goerlitz where the movie was shot.Vignettes (9:00, HD): three film-centered vignettes focusing on aspects invented for this movie by Anderson and his associates: a lecture on the country of Zubrowka, a look at the Society of the Crossed Keys, and the recipe for Mendl’s sweet confections which play an important role in the film.The Making of The Grand Budapest Hotel (18:08, HD): director-writer Wes Anderson, producer Jeremy Dawson, director of photography Robert Yeoman, production designer Adam Stockhausen, and actors Saoirse Ronan, Ralph Fiennes, Bill Murray, Jude Law, Tilda Swinton, Jeff Goldblum, Jason Schwartzman, Willem Dafoe, Edward Norton, F. Murray Abraham, and Tony Revolori all talk about their work on different phases of the production.Cast (3:24, HD): most of the above mentioned performers discuss their awe at being a part of the production and of working with each other.Wes Anderson (3:46, HD): the actors all describe their joy in being part of one of his projects.Stills Gallery: about three dozen images showing a mountain of props designed and built for the film to give it its unique identity.Theatrical Trailer (2:26, HD)Digital HD: code sheet enclosed in the casePromo Trailers (HD): Dom Hemingway, 3 Days to Kill.

The Grand Budapest Hotel is Wes Anderson’s best film since The Royal Tenenbaums, a funny and surprisingly nostalgic paean to an era long passed but beautifully recaptured in this engaging and memorable little romp. Highly recommended!

I am probably going to buy this blindly. Have heard so many good things
about this film. Thank you so much for reviewing it, Matt.

Ronald Epstein said:
I am probably going to buy this blindly. Have heard so many good things
about this film. Thank you so much for reviewing it, Matt.
Click to expand...

It's my favorite movie of the year (so far) but I would say that a person's enjoyment of it can probably be guessed by how much they've enjoyed Wes Anderson's other movies. If you like Anderson, I'd bet that you'll enjoy this one too but if you don't like his movies, you're probably not going to suddenly become a fan.

I don't think I have ever seen something so unique, clever, and
intriguing as this film.

I love it when filmmakers think outside the box and give us something
as refreshing as a film like this.

Just put a permanent smile on my face throughout.

^ If you need to see it immediately, then by all means ... however, I think it is also a given at this point that a more lavish Criterion release will eventually emerge. There may be some fans who will choose to wait for the Criterion.

Missed these in theaters, and looking forward to checking it out soon. Might not go with a blind buy (I'm 50/50 on Anderson's films), but when I like one, I really like it. So either I'll be "meh" on this almost immediately (as I was with Bottle Rocket, Life Aquatic, Rushmore) or I'll be like "I need to buy this" (as I was with Royal Tenenbaums and Fantastic Mr. Fox).

I don't know if I can think of another filmmaker who has such a distinct, unique style, where all of the films were very similar in so many ways, and yet my reactions so varied.
You must log in or register to reply here.