After its stellar fifth season which surely ranked as one of the most outstanding single seasons in the history of American television, CBS’ The Good Wife really had nowhere to go but down. To its credit, the show produced another very good and highly entertaining season, but there were instances on more than a few occasions where the effort and strain of producing twenty-two quality episodes of landmark television were beginning to be a bit much for even this most excellent cast and crew. The show still ranks among the best on the broadcast networks, and the highs definitely outweighed the lows in season six, but there were some weaknesses in story and execution this season. 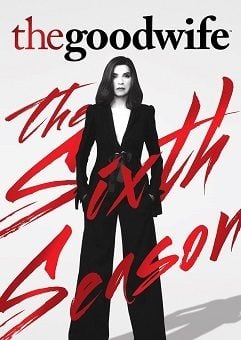 Four central story arcs occupied the majority of the season for the characters during Sunday evenings on CBS this past season. Cary Agos (Matt Czuchry) becomes embroiled in a legal plot in the state attorney’s office to bring down Chicago drug kingpin Lemond Bishop (Mike Colter) by getting to him through his lawyer, Cary having joined with title character Alicia Florrick (Julianna Margulies) in starting their own law firm during the tumultuous season five. Cary is arrested on trumped up charges and faces up to fifteen years in prison if convicted, and his topsy-turvy prison stints, judicial hearings, and interview sessions make the first half of the season a hellish one for him. Because she’s unhappy at her present law firm (in which she is a name partner), Diane Lockhart (Christine Baranski) decides to bolt from there and join Florrick-Agos, a decision that Cary is at first opposed to but with his own legal troubles can do little to stop. Diane becomes Cary’s legal counsel since his partner Alicia spends much of the season running for State’s Attorney to replace the corrupt head of the agency (Michael Cerveris). The ups and downs of her campaign against political newcomer and all-around good egg Frank Prady (David Hyde Pierce) occupy another large chunk of the season and come to a somewhat shocking and life-altering conclusion. And the firm’s investigator Kalinda Sharma (Archie Panjabi) finds herself busy all season trying to help her sporadic lover Cary and having to obey orders at the behest of Lemond Bishop.

If there’s one word that would describe the first two-thirds of the sixth season, it would be “frantic.” Almost every episode in that sequence of shows involves breathless countdowns to potentially catastrophic events for every major character, many of them made all the more urgent by the constant barking tantrums and ultimatums of political hatchet man (and the governor’s chief of staff) Eli Gold (Alan Cumming in a performance that's becoming increasingly tiresome in its intensity). After Cary’s legal problems are eventually settled and Alicia’s campaign closes with election returns and their aftermath, things settle down to less melodramatic pandemonium, but the early part of the season is not for the faint of heart (or binge viewers who will be emotionally worn to a frazzle by the episodes on the first three discs in this set). Because of the personal and professional problems of the main characters, there are somewhat fewer court cases this year than in years past, but the show’s expert team of writers make those legal scuffles count when they do turn up with the program’s patented trial ebbs and flows of disaster and triumph as gripping as they have always been.

With co-star Archie Panjabi announcing early in the season that she would not be returning in season seven, the show’s writers had to come up with something unique that would make her desert her friends and lovers cultivated over the past six years. There is an effective payoff after some of the perplexing obeisance to Lemond Bishop the character submits herself to this season, but much of her season’s stories being tied to his operations make her last season on the show her least effective one. On the other hand, Matt Czuchry’s expanded role this season allows the actor to show his widest-ever range of emotions as he struggles with arrest and trial in some of the program’s most gripping, nerve-jangling episodes. Matthew Goode who was brought in last season playing ADA Finn Polmar was promoted to regular this season, and his character likewise is put through the mill in both the State’s Attorney’s office and later when he strikes out on his own to set up his own office. And there’s no denying the chemistry he shares with Emmy-winning star Julianna Margulies as her character’s continuing problems with her unfaithful husband Peter (Chris Noth) leave her emotionally hungry. (Unfortunately, he won't be a regular next season either.) The show was really rich with guest stars this year featuring the likes of (in addition to those already named above) Michael J. Fox (repeating his Emmy-nominated turn as crafty attorney Louis Canning), Wallace Shawn, Taye Diggs, Linda Lavin, Richard Thomas, Christian Borle, Robert Joy, Robert Sean Leonard, Stockard Channing, Dallas Roberts, Connie Nielsen, Kyle MacLachlan, Carrie Preston, Jill Hennesy, Steven Pasquale, Rita Wilson, David Krumholtz, David Paymer, Ed Asner, Gary Cole, Mamie Gummer, John Glover, Lily Rabe, Ron Rifkin, Denis O’Hare, Oliver Platt, Kurt Fuller, and Jane Alexander.

Here are the twenty-two episodes contained on six discs in the season six DVD set:

The program is presented on CBS in 1080i and at 1.78:1 for its network broadcasts, and these downconverted 480p transfers look just about as good as it’s possible for a series to look in standard definition. Colors can be warm and rich and nicely saturated, and contrast is always spot on. Flesh tones are usually quite natural. Sharpness is very good but merely a shadow of what we get on the high definition broadcasts. There is a bit of aliasing that can be glimpsed on select episodes. Each episode has been divided into 6 chapters.

The Dolby Digital 5.1 audio track (the discs also offer a Dolby stereo surround 2.0 track) does not milk its busy urban streets and legal offices for a maximum of ambient sounds. True, music by David Buckley does offer a spacious surround presence in every episode, and dialogue has been expertly recorded and placed in the center channel. More could be done audio-wise to make the soundtrack as involving and immersive as the cases and personalities the series presents.

Deleted Scenes: ninety-six deleted scenes are scattered across the six enclosed discs paired with the episodes from which they were taken.

Follow the Leader: Inside the Season Finale (25:44): creator-producer-writer-director Robert King breaks down the construction of a typical episode from inception through the writing, filming, and post production work. We go inside the writers’ room to see the breakdown of the season and watch as the writers struggle with making the season finale a two-hour movie (which, after this featurette was filmed, was completely changed to a new season ender with the earlier idea relegated to the penultimate episode).

The Temptation of Alicia Florrick: The Good Wife: Season Six (23:21): creators Robert and Michelle King, producer David Zucker, and stars Julianna Margulies, Christine Baranski, Taye Diggs, and Matt Czuchry talk about the major story arcs of season six and the upheavals in the lives of the characters.

Still among the best shows on television and featuring stories filled with invention and characters who continue to grow and change season after season, The Good Wife remains must-see-TV. While it continues to be a pity that CBS/Paramount does not release the series on Blu-ray to better represent the rich textures and stunning photography, vivid production design, and award-caliber performances, a good upconverting player can make this box set a reasonable if grudging compromise for fans of the show. Highly recommended!

There's hardly a thing in your review I can disagree with, Matt. But that's not an uncommon thing.


But I certainly am not finding the intensity of Alan Cumming's Eli Gold tiresome. I find (and I know we've discussed this in another thread) his performance quite nuanced. Intense when necessary but also thoughtful and quiet when appropriate. His ability to tone down his stage acting for the intimacy of television never ceases to amaze me.


If, when all is said and done, CBS decided to issue a complete series set on Blu, I'd be all over it. All over it.


I totally agree this is one of the best series on television right now.

Mike Frezon said:
But I certainly am not finding the intensity of Alan Cumming's Eli Gold tiresome. I find (and I know we've discussed this in another thread) his performance quite nuanced. Intense when necessary but also thoughtful and quiet when appropriate. His ability to tone down his stage acting for the intimacy of television never ceases to amaze me.
Click to expand...

I would have said the same thing in previous seasons but not this past one. For me, his performance became almost cartoonish especially during those intense first dozen episodes.

One of the things I have liked about his character over the run of the show has been how he handles coming in contact with the the other regulars--but in completely different ways.


For example, we know his role with Peter: chief of staff. But his relationship with Alicia is much more complicated: she's Peter's wife, a candidate, co-worker, friend, and many other things. And he needs to adjust accordingly.


But he also relates to Peter's mother Jackie, to Zack and Grace, even Kalinda and changes his demeanor so appropriately for each situation/conversation as it arises.

Perhaps when you binge watch a show as I have to do with all of the TV sets I review, you see these behaviors back-to-back-to-back without the benefit of a weekly filter to help you forget their sameness, and it thus possibly doesn't seem so off-the charts, but I really found his explosions of pique almost laughable coming one episode after another so that I began to fear that the poor man was going to have a heart attack by busting a gasket several times during every single episode for a long spell of shows.


Understand, my admiration for him as an actor and a person is unbounded, but these early season episodes seem more scenery chewing than reflective acting to me. But again, it's just my opinion alone. And it doesn't harm the overall effectiveness of the show since so many characters now have traits with which we quickly identify them.

I might agree...except that I binge-watched most of season 6 too as I got caught up from binge watching seasons 1-5 before it.


The idea of watching season 7 a week at a time is going to be difficult for me!

Mike Frezon said:
If, when all is said and done, CBS decided to issue a complete series set on Blu, I'd be all over it. All over it.
Click to expand...

You and me both.
You must log in or register to reply here.

Tuesday at 11:32 AM
Ronald Epstein