The Golden Voyage of Sinbad (1 Viewer) 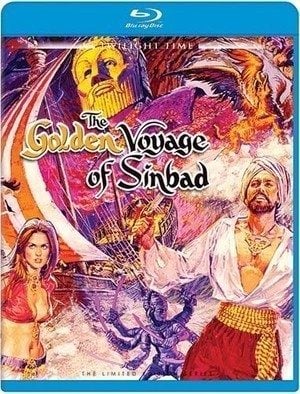 The Production Rating: 3.5/5 Quests and adventure drop into your lap when you are a hero. This happens literally to Sinbad(John Phillip Law), as a sinister flying creature drops a golden tablet on the deck of his ship while Sinbad is at sea. Before long, a storm has transported Sinbad's ship to a strange land where Prince Koura(Tom Baker), a wizard, demands the amulet from Sinbad. Sinbad refuses, and meets the Grand Vizier of Marabia(Douglas Wilmer), a ruler wearing a golden mask to conceal his face disfigured by burns. Sinbad agrees to join the Grand Vizier in his quest to locate the other 2 pieces of Sinbad's amulet which, when put together, will provide youth, a shield of darkness, and a crown of untold riches. They are accompanied in their quest by the comely Margiana(Caroline Munro) and by Haroun(Kurt Christian), the son of a wealthy merchant who acts as comic relief in his laziness. Sinbad and his crew encounter various fantastic creatures as they race to beat Prince Koura to the prize.

The Golden Voyage of Sinbad is the follow up to The 7th Voyage of Sinbad(1958), also produced by Ray Harryhausen and Charles H. Schneer, which featured Kerwin Mathews as the lead. Director Gordon Hessler had previously directed horror films but he does good service here to the material. Harryhausen's creations in this film include a centaur, a griffin, and a sword-wielding six-armed Kali statue.

The Golden Voyage of Sinbad is an entertaining popcorn film for children and adults alike who have never lost their sense of wonder, even if it never rises to the same level as The 7th Voyage of Sinbad or Jason and the Argonauts. An amusing in-joke in the film is the captioning during Prince Koura's recitatation of his spells: the spells are actually the advertising slogans, spelled backwards, for Trix and Cocoa Puffs cereals.


Video Rating: 4.5/5 3D Rating: NA The film is presented in 1080p high definition in a 1.66:1 aspect ratio with the AVC codec. The picture quality is excellent with a sheen of grain visible but not overwhelming and fine detail on display in many shots. Colors tend to be vibrant, and contrast is excellent.

Certain scenes having optical dissolves, matte paintings, and/or stop motion animation appear with much better contrast, and less grain, than one might expect, since there is often a drastic drop in picture quality. This is thankfully not the case here, and the special effects probably have never looked better, as high definition has seemingly enhanced their qualities rather than revealed any flaws.

I find the aspect ratio at 1.66:1 suits the film well, although it is debatable whether this is the correct aspect ratio, or whether 1.85:1 is correct. Harryhausen has gone on record as preferring the aspect ratio that exposes as much as the negative as possible on his films, which is understandable given that Harryhausen was effectively the 2nd unit director who acted as cinematographer on all of the major effects sequences, and he seemingly composed his shots to expose more of the upper and lower portions of the frame than would be revealed in a wider aspect ratio.


Audio Rating: 4.5/5 The English DTS-HD 5.1 Master Audio provides audio that may rise to a higher standard of quality than the film enjoyed in any of its theatrical showings. Dynamic range is surprisingly good, and the soundtrack has no apparent flaws. Dialogue is always clearly audible through the front channels and the soundtrack composed by Miklos Rosza(The Thief of Bagdad) is rich and sumptious, and lowers almost imperciptibly at times to enhance the clarity of dialogue.


Special Features Rating: 3/5 The special features include all of the following:

Three Worlds of Gulliver featurette(7:12): Ray Harryhausen discusses the production of the 1858 film.

Earth vs. The Flying Saucers(11:52): Director Joe Dante interviews Ray Harryhausen about the creation of special effects for this 1956 film.

Original Theatrical Trailer(2:47): This is the original trailer for The Golden Voyage of Sinbad.

Also included in the clamshell case is an exquisite illustrated booklet with an informative essay about production of The Golden Voyage of Sinbad written by Julie Kirgo.


Overall Rating: 4/5 The Golden Voyage of Sinbad is a fun adventure film with special effects that stand the test of time, even if they do not have the slick sheen of CGI. The video presentation is sublime with the high definition transfer enhancing the special effects rather than exposing flaws as it might on lesser films. The audio is likewise excellent with a presentation that almost certainly surpasses any original theatrical presentation. The special features highlighting the creations of Ray Harryhausen, along with the original trailer, are a nice addition, and the isolated score track is worthwhile for anyone who wants to enjoy the compositions of Miklos Rosza without interruption by dialogue.

The Golden Voyage of Sinbad on Blu-ray is a limited edition of 3,000 units licensed by Twilight Time from Sony Pictures. It is available exclusively at www.screenarchives.com until this limited edition sells out.

If you do a side by side comparison of the last SD and the new BD, you'll see that the 1.85:1 looks zoomed in and the 1.66:1 looks perfect! The sound is what it is.Of course, on a big HT screen, the BD is a sight to behold...just like being at the movies!
You must log in or register to reply here.