The Gift creeps onto Blu-ray in an edition that offers the low budget thriller in high definition, along with a few extras. Written and directed by co-star Joel Edgerton, the movie centers on a successful couple (Jason Bateman and Rebecca Hall) being stalked by someone from the husband’s school past (Joel Edgerton). There’s potential for some good scares in the idea, but the movie never really knows what to do with it, opting instead for a constantly changing premise that flattens out the experience. Joel Edgerton’s commentary indicates he may not have understood the basic problems undermining his story from the beginning. 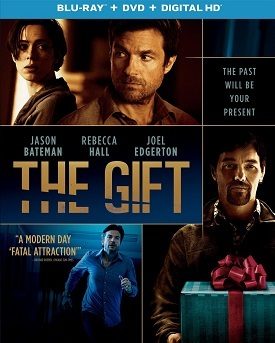 The Gift presents itself as a creepy stalker movie, and for its first act or so, it seems to be one. Married couple Simon (Jason Bateman) and Robyn (Rebecca Hall) return to Simon’s hometown when he gets a great job opportunity. And right away they run into Simon’s former classmate Gordo (Joel Edgerton), who seems to be just a bit, shall we say, off. In short order, Gordo begins inviting himself over to Simon’s house, bringing all sorts of unwanted gifts – most particularly himself. If the movie stayed with this premise, it would be a predictable, if not reliable, addition to the Blumhouse stable of low budget thrillers and horror movies. But writer/director Joel Edgerton is aiming higher here – and sadly, his attempts to take the movie to a more interesting place, have only resulted in an even more unsatisfying experience.

SPOILERS HERE: The guaranteed element in a thriller like this is that Gordo is bound to start acting stranger and stranger until we get Uber-Villain territory. The movie even sets this up with moments like Simon and Robyn’s dog disappearing, and with some genuinely creepy setups. However, the movie also begins hinting that Simon knows a lot more than he’s saying about “Gordo the Weirdo”, and that all may not be what it seems between Simon and Robyn. In the middle of the movie, we get the big game-changer: Simon was a bully to Gordo in school, and is the same bully today, thus justifying Gordo’s behavior. If anything, Simon becomes creepier to the viewer than Gordo, and Gordo seems to become more sympathetic. On paper, this is an interesting idea – but in practice in the movie, it just renders the larger dramatic moments as confusing. Is this a story of the couple being stalked by a guy driven mad by Simon’s bullying and therefore a dangerous threat, a la Terror Train? Or is this a story of how Simon the bully deserves a comeuppance? Edgerton the writer/director can’t make up his mind which one it is, so we get a hazy mix of both ideas.

BIGGER SPOILERS: Since the basic concept is confused, the big reveal at the end doesn’t land with the impact it should. Edgerton has Gordo set Simon up for a fall in multiple areas. Simon loses his cushy job (due to his continuing bully tactics being discovered by his boss), loses his wife (due to Gordo playing up exaggerated wounds from a beating Simon just gave him) and finally is given the title Gift. We know from early on that Simon and Robyn have been unable to have children. So when Robyn is suddenly pregnant, and the timing is noted by Gordo as lining up with a day when he broke into the house, knocked her out and may or may not have done something really awful… But even with this, Edgerton doesn’t commit to what happened. He leaves the audience in the dark with Simon as to what actually occurred. So Gordo gets his revenge, but there’s no real sense of satisfaction for him nor is there any real sense of foreboding for Simon. It’s all just a confused series of feints in different directions. With a movie like this, you really want to have more of a sense of ringing finality or at least some notion that ties all of it together – such as the ending of Se7en, where you get the full package. With this film, there’s just a sense that Joel Edgerton had an interesting thought for a thriller, but couldn’t figure out which thriller he wanted to make.

The Gift has been released simultaneously on Blu-ray and standard definition as of November 10. Both editions share the same bonus features, including a commentary with Joel Edgerton. The Blu-ray adds high definition picture and sound.

The Gift is presented in a 1080p AVC 2.40:1 transfer (@ an average 34 mbps) that presents the low budget shoot in the best possible light. Much of the story takes place at Simon & Robyn’s house, and the movie makes the most of that environment, presenting it in multiple day and night situations.

The Gift is presented in an English DTS-HD Master Audio 5.1 mix in English (@ an average 3.7 mbps, going up to 4.7 mbps in the bigger cattle prod moments). Most of the sound is in the fronts, but there are plenty of moments where the other speakers come into play for a good “BOO!” moment as circumstances permit.

Feature Commentary with Joel Edgerton (AVAILABLE ON DVD & BLU-RAY) – Joel Edgerton provides a scene-specific commentary, discussing the low budget shoot, and talking about the editorial choices he made along the way.

Alternate Ending (4:38, 1080p) (AVAILABLE ON DVD & BLU-RAY) – This is a longer version of the ending, including some new material that was shot as additional material, fleshing out Gordo’s activities at various points in the story. It’s frankly unnecessary, as we already know what we need, and this material only confuses the plot further. The alt ending can be viewed on its own, or with a two minute introduction by Joel Edgerton.

Deleted Scenes (7:55 Total, 4 Scenes Total, 1080p) (AVAILABLE ON DVD & BLU-RAY) – Here are four deleted and/or extended scenes. They can be viewed individually or via a “Play All” function, and there is an option for each to have an introduction by Joel Edgerton. This is all superfluous material, starting with a longer version of a confrontation between Simon and Gordo that just adds extra violence to no good effect.

SPOILERS IN THE NEXT COUPLE OF FEATURETTES, INCLUDING TITLES:

Karma For Bullies (1:54, 1080p) (AVAILABLE ON DVD & BLU-RAY) – This ultra-fast snippet is effectively another trailer for the movie, mixing some preview footage with a few quick soundbites about making a movie about a bully getting his comeuppance.

The Darker Side of Jason Bateman (1:05, 1080p) (AVAILABLE ON DVD & BLU-RAY) – Here’s another blink-and-miss it snippet, this one talking about casting Jason Bateman against type as an antagonist rather than a good guy.

Digital Copy – Instructions are included in the packaging for downloading a digital copy of the movie to your laptop or portable device.

The Gift sadly does not live up to even modest expectations for a new Blumhouse thriller. It’s commendable that writer/director/co-star Joel Edgerton was aiming a little higher with his story of a married couple being stalked by someone from their past, but it’s hard to give it points when the end result is so flat. The Blu-ray offers the movie in high definition, along with a few quick extras and a commentary by Edgerton.