The Gambler from Natchez DVD Review

For those of us of a certain age, actor Dale Robertson will always be thought of as a television star rather than a top-billed movie star, but he certainly did have a film career both before and after his long-running success on The Tales of Wells Fargo. The Gambler from Natchez finds Robertson at the top of the marquee in one of 20th Century Fox’s non-Cinemascope films of the 1950s released by their subsidiary company Panoramic Productions. It’s a western to be sure, but Robertson doesn’t play a gun-toting lawman or gunfighter. Rather, he’s the slick, sophisticated title character, a gambler returned from the Civil War ready to go into the world of professional gambling with his father. 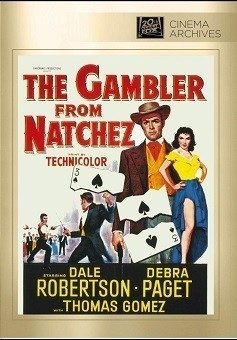 Captain Vance Colby (Dale Robertson) is eager to be reunited with his father after the Civil War and has no shame of the fact that his father is an honorable professional gambler, a trade that he himself is also excellent at. But when he gets to New Orleans, he finds that his father has been killed in a disputed game of blackjack with three witnesses, all considered social elite in the city, saying that Chip Colby was caught cheating and was justly killed when trying to get away with it. Vance learns from one of the servants that it was the three witnesses who staged the murder in order to get back Chip’s share of a new riverboat they wanted to own outright, and so Vance makes it his job to methodically get revenge on each of the three charlatans: Nicholas Cadiz (John Wengraf), Claude St. Germaine (Douglas Dick), and the ringleader of the scam André Rivage (Kevin McCarthy). Cajun riverboat owner Antoine Barbee (Thomas Gomez) and his spitfire daughter Melanie (Debra Paget) assist Vance in his schemes to trap the conspirators in plots of their own undoing.There’s the germ of a great idea in the script by Gerald Drayson Adams and Irving Wallace based on Adams’ own story. Two of the three despicable men who contributed to the murder of the hero’s father are cleverly tricked into situations where they’re having to face their own style of trickery, situations that their elite social class can’t rescue them from. The scripters stumble a bit with having fate (or Lady Luck, if you will) bring about the death of the first one of the villains instead of Colby’s getting to stage his own revenge scenario (the other two face much more canny situations where they’re rats caught in a trap), but their ultimate ends are reasonably satisfying for an audience who can see (even if no one else in New Orleans can) how loathsome these oily connivers actually are. Henry Levin’s direction is reasonably sound even if the pacing shambles a bit in the film’s first half. Of course, he’s saddled in the first half with an extremely tiresome triangle love story with Colby lusted after by the Cajun Melanie while he has hungry eyes for his enemy’s sister Ivette (Lisa Daniels), but once the revenge scenario gets revved up, the film’s pacing likewise accelerates.Dale Robertson cuts a striking figure in both his army uniform and his later dress clothes (taking place in New Orleans, the men are all dressed as southern gentlemen rather than as cowboys; this is a western only in the broadest sense), and he has a no-nonsense approach to the role even if his dramatic arc here is fairly limited. Thomas Gomez as the Cajun riverboat captain gives the film’s most entertaining performance broadly finding both comic and dramatic opportunities in the script. Kevin McCarthy acts the main rogue with the expected bluster and cowardice these dilettante parts often provide. Debra Paget isn’t the most convincing Cajun one could imagine, but she does show a great deal more fire here that she does in some of her other roles at Fox in the 1950s. Lisa Daniels doesn’t sport a very convincing southern accent as the spoiled Ivette, but Douglas Dick squirms entertainingly as André’s weaselly sidekick. Longtime character actors Jay Novello and Woody Strode have nice little cameo roles that they handle expertly.

The Panoramic productions were all framed at 1.66:1 for theatrical exhibition, but Fox presents here an open matte 1.33:1 transfer probably prepared long ago for television broadcasts thus losing much of a sense of expansiveness for the river and antebellum south locations. The transfer is also too dark giving the color’s saturation levels something of a jolt and making flesh tones too heavy and the entire image a bit too brown. Sharpness is good, and due to the dark transfer, black levels seem very good, but details definitely get crushed in the shadows. There is some intermittent dust and debris, and the reel change markers are in full view. But the transfer has the most trouble with line twitter and flashing in clothing and certain patterns. The film has been divided into chapters every ten minutes so there are 9 chapters.

The Dolby Digital 2.0 mono sound mix is decoded by Dolby Prologic into the center channel. The entire recording level of the transfer has been set way too high and will necessitate user adjustment to prevent distortion. There is fairly constant hiss and noise that comes and goes in various parts of the film. There are occasional pops and crackle, too. Still, dialogue has been well recorded and is not compromised by the audio artifacts or the music or sound effects.

There are no bonus features on this Fox MOD disc.

The Gambler from Natchez is a reasonably entertaining genre film from the 1950s with studio contract players offering more than acceptable performances and a story that does hold some interest. This Fox MOD is not one of the studio’s finer achievements with an ill-framed and too dark picture and an audio track that’s only of average quality.

Thanks for the review Matt.
Looks as if nothing has changed at Fox land.

I've never seen this film and I've always wanted to. I was hoping to buy this disc but . . . oh, forget it! Go home Fox. Stop wasting our time.
You must log in or register to reply here.