After directing one of the best police thrillers of the 1960s with Bullitt, Peter Yates took a much different approach to the genre in his 1973 crime drama The Friends of Eddie Coyle. Less a thriller and more focused on character than in the earlier piece, The Friends of Eddie Coyle features a handful of really terrific character actors giving marvelously real performances. It’s one of those movies that improves with each viewing, another layer of depth to the story being revealing each time one revisits these gritty, melancholy Boston locations. Criterion released the movie on DVD back in 2009 and now offers a Blu-ray upgrade to that original release. 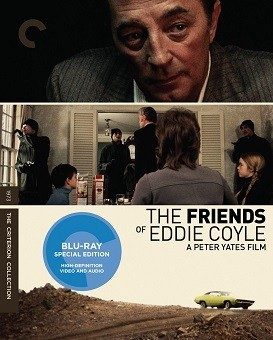 Mid-level mob guy Eddie Coyle (Robert Mitchum) finds himself at age fifty-one facing another potentially lengthy prison stretch for his small part in an armed robbery. In an effort to escape receiving any jail time and being separated from his wife and three young kids, he decides to do some talking to the police, particularly detective Dave Foley (Richard Jordan). He doesn’t plan to give them anything big. Mainly, he’s going to turn in an arms dealer named Jackie Brown (Steven Keats) who’s lately been moving machine guns and lots of powerful handguns. Little does Eddie know, however, that some of those weapons are being used in a series of bank jobs that have the entire force on alert. So Eddie’s little bit of “squealing” is actually a much bigger deal than he imagined.

Producer-screenwriter Paul Monash has adapted George Higgins’ crime novel pretty much intact. Though the story is told progressively, the script is actually more of a piecemeal matter with different aspects of the story being introduced to the viewer without any set-ups or exposition. By the two-thirds mark, the pieces have all fallen into place: we know who all the major players are, and we have been slyly and cleverly drawn into the milieu of the Boston underworld almost without realizing it. Though Yates has no set piece in this movie to rival that dazzling chase in Bullitt, he still has a few tricks up his sleeve. We see one of the bank jobs go off without a hitch as the director shows us the robbers' methodology in great detail. (A later bank job runs into difficulties though we don’t see all of its aftermath.) We’re also treated to a very exciting dragnet sequence in a parking lot which doesn’t last a tenth as long as the chase in Bullitt but has some of the same kinetic energy and snap. Having helmed the caper film The Hot Rock before directing this picture, Yates shows supreme confidence with capturing the effortless guile of the robbers as each does his job as part of a well-drilled team. The series of delicious surprises which come at the end of the film aren’t milked for their shock value. Like much of the movie, the tone is subdued and rather prosaic. There’s nothing showy at all about The Friends of Eddie Coyle.

Robert Mitchum was in something of a renaissance period of his career in the early-to-mid 1970s with this film, The Yakuza, and Farewell My Lovely all showing the sublime actor at his effortless best. He’s matched every step of the way with beautifully understated performances from Richard Jordan, Peter Boyle (as a most improbable hitman masquerading as a bartender), Alex Rocco (as the head of the robber squad), and Joe Santos. Steven Keats has the showiest role as the young but not so stupid arms dealer, and he makes a definitely strong impression amid this gang of heavyweight performers.

The film’s original 1.85:1 theatrical aspect ratio is replicated on this release although the opening credits have been opened up a bit to 1.66:1 and the image is presented in 1080p resolution using the AVC codec. Though the picture retains the light grain and slightly softer focus of films in this period, close-ups feature more than adequate detail though the color does on occasion look a trifle dated especially some thick and chalky flesh tones. The image is very clean, however, and is not hampered by any age-related artifacts. The film has been divided into 26 chapters.

The PCM 1.0 (1.1 Mbps) audio track is exactly what one would expect for a film from this period. Dave Grusin’s jazz score is a definite highlight though one will notice the lack of really deep bass in the mix and a more distinct treble emphasis in both music and dialogue. Dialogue is clear and clean (some looping of lines is sometimes notably obvious), and the track is not spoiled by hiss, pops, crackle, or flutter.

Audio Commentary: director Peter Yates was recorded in 2009 for the DVD release about his memories of making the movie. It’s one of three he’s directed which he says are his favorites (the others, by the way, are The Dresser and Breaking Away). The track also reveals Yates to be a trouper though the decades have stripped away memories of specific production anecdotes for him to relate. He’s very positive about the cast and crew in this rather generic commentary track.

Stills Gallery: behind the scenes looks at the shooting which the viewer can step through with some stills representing cut scenes and with occasional text commentary by the director.

Enclosed Booklet: forty-three pages that contain the cast and crew lists, information on the transfer, some excellent color stills, a wonderful homage to the film by critic Kent Jones, and a memorable paean to Robert Mitchum by journalist Grover Lewis written on the set of the film and originally printed in Rolling Stone.

Another favorite I can't wait to upgrade!
D

Can anyone give more details about how this looks? I read it could look better. Criterion list it as a new high definition digital transfer, but do not mention 2K or 4K as sometimes they do. Does this mean it is an older transfer?

The enclosed booklet simply refers to it as a "high definition digital transfer." No other indications of when it was done, but I suspect this was the transfer done when the film was first scanned for DVD release several years ago (downrezzed for the DVD).


I honestly don't remember how it looked in the theater, but I suspect this is pretty close to the mark.