Thought to be a book quite impossible to film, John Fowles’ The French Lieutenant’s Woman became an unusual and much-discussed film adapted by the noted playwright Harold Pinter and directed for the screen by Karel Reisz. While changing radically the original author’s concept of telling of his tale while commenting on it from a modern perspective at the same time, Pinter and Reisz have come up with their own unique commentary on the Victorian-set narrative, and the parallel nature of the two stories being told gains in richness and impact the more times one views the finished cinematic work. 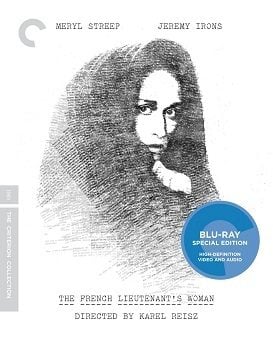 The two stories which run relatively parallel to one another both involve clandestine and tormented love affairs set a century apart but sharing in the same kinds of thrill of the chase, eagerness to be together, and madness to be separated that many such affairs often entail. In the 19th century story, scientist Charles Henry Smithson (Jeremy Irons) becomes bewitched by the tantalizing but enigmatic presence of Sarah Woodruff (Meryl Streep) whom the locals in Dorset call “The French Lieutenant’s Woman,” so named for an alleged affair with an officer who has abandoned her with no money and a ruined reputation. Charles himself is engaged to the wealthy heiress Ernestina Freeman (Lynsey Baxter), but he finds himself constantly running into the shyly retiring, soft-spoken Sarah and eventually hears her story. But what exactly is her story since, at several points during the telling, details and circumstances seem to change to suit Sarah’s situations. In the 20th century narrative, the actors playing Sarah and Charles, American Anna (Meryl Streep) and British Mike (Jeremy Irons), both married to others, are having a movie location love affair that grows in intensity on Mike’s part, made miserable by the fact that when filming is over, they’re likely going their separate ways.

Harold Pinter’s screenplay wittily flips back and forth between the two on-going love affairs, and both seem to get more complicated the deeper into the story we go. In both cases, Pinter stresses the innate power of the woman in such relationships, even, surprisingly, in the 19th century period where one would expect the man might hold all the cards, but the puzzle that is Sarah Woodruff (which neither the book nor the film ever really solves) is what gives the enterprise its mystery and its excitement, and one becomes aware about halfway through that the women in both centuries are the power players. The balancing act between these stories is a tenuous one, but director Karel Reisz handles it with aplomb using old fashioned wipes sometimes between scenes and in one magnificent gesture, cutting from a modern-day rehearsal moment to the 19th century story in progress in one smooth, effortless motion. He makes sure he captures the occasional wildness of the place as Sarah wanders out on the twisting stone pier at Dorset with waves crashing around her and the wind-swirled mist making her seem ever the ethereal mystery woman as well as showing us the natural beauties of the woods and the lovely house and grounds of the Freemans. The movie set locations allow us to see the supporting members of the 19th century story in their regular clothes, and while none of their modern roles amount to much, the contrasts in looks and behavior are quite entertaining (for example, Sarah’s starchy mistress Mrs. Poulteney played icily by Patience Collier is seen relaxing at a lawn table smoking a cigarette in modern dress).

This was Meryl Streep’s first taste of true movie stardom with her first top billing (previously she had won awards for supporting work in films and a starring role on television in Holocaust) and awards for her performance in this movie coming from the Los Angeles Film Critics and the Golden Globes (she would sweep the awards circuit the following year with Sophie’s Choice). She does make Sarah a walking and thinking enigma, her eyes betraying oftentimes the fabrications she’s improvising as needed, and her Anna is flirty, sensual, but always just a bit removed from full commitment to the affair. Jeremy Irons surrenders completely to Charles’ obsessions, growing ever more desperate as the film progresses (both as Charles and Mike). As Charles’ valet Sam, Hilton McRae gives a good account of himself (a bit of suggestive blackmail, however, seems to be a dangling thread in the narrative), and Lynsey Baxter is more impressive as the jilted Ernestina than as the simpering air-headed bride-to-be. As her firm father, Peter Vaughan is quite good as is Leo McKern whom Charles turns to for guidance once his head becomes muddled. In the tiny role of Mike’s wife in the modern portion of the movie, the young Penelope Wilton (whom we know today as Isobel Crawley on Downton Abbey) offers some of the same poignant aching-through-smiles technique that would earn her many international fans three decades later.

The film’s theatrical aspect ratio of 1.85:1 is faithfully rendered in this 1080p transfer using the AVC codec. Freddie Francis’ gorgeous cinematography (that somehow failed to be nominated for an Oscar) looks glorious in the transfer capturing the greens of the countryside quite succinctly and offering details in clothes and hair in great abundance (though, of course, there are rudimentary glamour shots for some of the ladies that are softer in appearance). Skin tones are lifelike and appealing. Black levels might not always be the deepest, but they’re more than adequate. You’ll notice a stray speck or two, but most of the film has been cleaned up admirably. The film has been divided into 15 chapters.

The PCM 1.0 (1.1 Mbps) sound mix is very much of its era, and it’s generally quite strong, but occasionally sound effects like wind or crashing waves can overpower the dialogue a little bit. Carl Davis’ lovely music score (which wasn’t Oscar-nominated but which won the British Academy Award) can also occasionally drown out low level dialogue. No age-related artifacts like hiss or crackle cause any problems at all.

Ian Christie Interview (20:19, HD): a 2015 interview with the film scholar who offers a video analysis of the book and film that’s quite illuminating.

The South Bank Show (51:32, HD): a 1981 episode of the program which presents a collage of interviews featuring original author John Fowles, screenwriter Harold Pinter, and director Karel Reisz who all seem quite pleased with the film version of the work (the show was filmed before but broadcast after the movie premiered).

Emotional Uncertainties (30:54, HD): separate interviews with stars Meryl Streep and Jeremy Irons who discuss their dual roles and the Oscar-nominated film editor John Bloom who discusses how the film was shot and pieced together.

Carl Davis Interview (21:13, HD): the film’s composer discusses where he got the notions for some of the major themes of the piece and talks about the decision to use Mozart at one portion of the film.

Pamphlet: contains a cast and crew listing, information of the transfer, a gorgeous lithograph on the backside of the opened pamphlet, and an essay by film scholar Lucy Bolton.

A one-of-a-kind film, The French Lieutenant’s Woman continues to fascinate viewers with its multi-leveled story and expert performances, particularly from the two leads playing complex dual roles. The Criterion Blu-ray offers a gorgeous picture and solid sound for fans of the film. Recommended!