Mike Nichols' 1975 comedy The Fortune was greeted with widely divergent opinions from film critics. So divergent, in fact, that two critics for The New York Times, John Simon and Vincent Canby, had widely disparate feelings about it. Simon dismissed The Fortune as "profoundly unsatisfactory and unlikeable," whereas Canby wrote that it is "very funny" and "a marvelous, uncharacteristic stunt" by director Nichols. However you might respond to The Fortune, it has now come to Blu-ray courtesy of Twilight Time with yet another top-notch transfer from Sony. 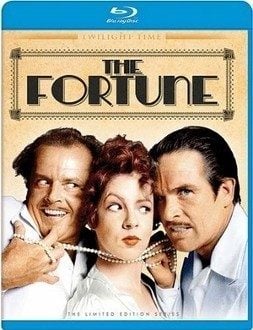 Mouse beds. - Oscar SullivanThe Fortune opens outside a gated mansion somewhere in New York State during the 1920s. Fredericka "Freddie" Bigard is the heiress to a fortune, but she is sneaking away from home to travel to California with her lover, Nicky Wilson (Warren Beatty). On their way to a Justice of the Peace they pick up Oscar Sullivan (Jack Nicholson), who presumably is tagging along to be the Best Man. However, there are complications. Nicky, we learn, is married, and his wife is refusing to give him a divorce. Nicky cannot take Freddie across state lines without running afoul of the infamous Mann Act, which made it a Federal crime to take a woman from one state to another for an "an immoral purpose." Their solution is to have Oscar, an unmarried small-time crook, marry Freddie and accompany them to California.This odd trio embarks upon an eventful cross-country trip which begins inauspiciously for Nicky and Freddie because she passes out from drinking alcohol and she spends her wedding night in a stupor. The unkempt Oscar begins to think of himself as a third wheel and he clearly is jealous that he is Freddie's husband in name only. They board a plane to fly the last leg of their trip to California, and upon the approach to the airport Oscar decides that it might be fun to exit the cabin and walk on the wing. He somehow manages to survive the stunt, but Nicky is furious. Their search for a place to live leads them to a courtyard of bungalows run by Mrs. Gould (Florence Stanley).Nicky tries to convince Oscar that Freddie has no money of her own, but Oscar may not be quite as stupid as he seems. Nicky goes out and finds a job, but Oscar prefers to sleep late and is not motivated to do anything other than put the make on Freddie. When she finally succumbs to Oscar's advances, Nicky unexpectedly comes home for lunch and he figures out what has taken place. An argument between the two men ensues, and Freddie comes to realize that what they really want is the money which she is going to come into on her birthday. She then announces that she is fed up with both of them and that she is going to give all of her money to charity. Nicky and Oscar, despondent at the thought of losing out on Freddie's fortune, decide that the only solution is to murder her. Oscar, as her legal husband, will inherit her money and he will split it 50-50 with Nicky. The only problem is that doing away with Freddie proves to be far more difficult than they imagine.John Simon despised The Fortune because he felt that the stupidity of the principal characters makes it impossible to have any sympathy for them. Canby, on the other hand, wrote that "Characters in farces should not be held accountable for base motives and terrible deeds. Farce is a land without consequences." I side with Canby on this argument. The Fortune starts off slowly and requires some patience, but the last act has some very funny scenes and includes appearances by supporting actors Scatman Crothers, Richard B. Schull, Dub Taylor, John Fiedler, and Christopher Guest.Warren Beatty is smooth and oily as Nicky, a handsome rake who exceeds his level of competence when he decides to plan a murder. Jack Nicholson is very funny as the excitable and ultimately panic-struck Oscar. He is very amusing when he explains to Nicky about how, when he was a young boy, his mother would send him to the store to pick up a box of "mouse beds." Stockard Channing is a revelation in her first lead film role, displaying a zany streak and impeccable comic timing. Watch the expression on Oscar's face when Freddie demonstrates her stretching exercises for him.Humor is a very individual thing, but if you like The Fortune you will probably like it a great deal..

The 2.35:1 1080p image utilizes the AVC codec and lives up to Sony's usual exemplary standards. The picture is slightly soft at times, but this appears to be inherent in the source material. Colors are solid and accurate, black levels are strong, and shadow detail is very good. There is not a hint of age-related dirt or damage. There is no evidence of excessive digital manipulation.

The English 1.0 DTS HD-MA audio is as fine as it could possibly be. Every word of dialogue is crystal clear and free of noise and hiss. The dynamic range of David Shire's mono period-appropriate score has inherent limitations, but the music sounds very good nevertheless.English SDH subtitles are an available option.

The only special feature on the disc is the isolated music and effects track.As usual, this Twilight Time Blu-ray comes with an illustrated eight-page booklet which contains an incisive and informative essay by the estimable Julie Kirgo. She notes that The Fortune was a box office failure in 1975 but its reputation has grown much more favorable as the ensuing decades have passed.

The Fortune received mixed reviews upon its release in 1975, in spite of the star power of Warren Beatty and Jack Nicholson and the impressive reputation of director Mike Nichols. Fans of the director and his stars now have an opportunity to give The Fortune another chance with this nearly-impeccable Blu-ray release.As always, this Twilight Time Blu-ray is a limited edition of 3,000 copies, so those who are interested in purchasing it should go the Screen Archives website and confirm that copies are still available.

Thanks Rich. This is a blind buy for me. It sounds like something right up my alley.

Thank you for the review, was on the fence but will order this week

Thanks for the review. I have this and watched it about a week or so ago. I like the film and find Nicholson hilarious in it. This is another film that to me feels like something the Coen brothers would love...or fans of the Coens would love...because this seems like something they could have made. Sort of the Coens before there was Coen Brothers films. There are several films like this that I think could have been...oh I don't know...influences on them or at least films they enjoyed at some point.

Anyway, this is another deal where I'm surprised that this Mike Nichols film has made it to blu-ray before films like Who's Afraid of Virginia Woolf?, Catch-22, or Carnal Knowledge. I would have thought those films being as wonderful as they are, would have landed on blu long before the sort of obscure The Fortune. Don't get me wrong...happy to have this on blu but let's get those other three out there too please.

By the way this blu both looks and sounds great.

Delightful film. I watched it last night. And I immediately thought the same thing about it being very Coen-esque. Very happy with this blind buy.
You must log in or register to reply here.