The Fault in Our Stars Blu-ray Review

Josh Boone’s heartfelt adaptation of John Green’s best-selling novel The Fault in Our Stars was a surprise box-office hit, but it really shouldn’t have taken the movie executives or the public unawares. A teen love story triumphing over terminal illness with charismatic leading actors, sensitive direction, and generating enough tears to float a battleship has all the marks of a movie that would appeal to several generations of moviegoers, and that it certainly did. It’s beautifully made, and even with some of the forced tropes of the genre, the movie floats by them on clouds of good will and expert showmanship. 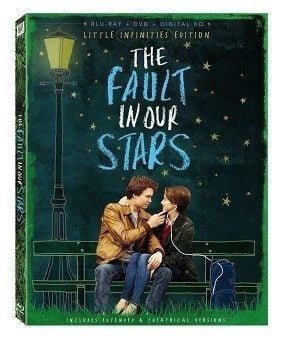 Teens Hazel (Shailene Woodley) and Gus (Ansel Elgort) meet in a cancer survivors’ support group and are instantly attracted to one another. She’s still in stage four of her disease but with the aid of omnipresent oxygen to assist her affected lungs, she can have close to a reasonably comfortable if restricted life, so she’s not eager to begin a relationship with the rascally charming and endearing Gus (who’s lost the lower half of his right leg to the disease already but which is otherwise in remission). But when Gus takes an interest in her favorite author’s (Willem Dafoe) best known work and communicates with him to get them an invitation to Amsterdam to meet him, Hazel realizes she’s fighting a losing battle and gives in to her feelings while they have a memorable visit to Amsterdam: part idyll, part nightmare but life changing in terms of the couple’s feelings. Meanwhile, the disease continues to work its own insidious way into affecting their buddingly intense involvement.Scott Neustadter and Michael H. Weber have done outstanding work in adapting the novel for the screen, and with Josh Boone’s sensitive direction, the film is never really maudlin even with such a heinous disease always looming in the background. One celebrates the highlights from the couple’s meet cute at the support group to that magical champagne dinner on their first night in Amsterdam where it seems the world is truly their oyster. Boone doesn’t back away from the darker moments of the tale either: the agonizing trip to the Anne Frank House where Hazel insists on climbing the stairs even with her impaired breathing and general weakness, a terrifying flashback to the thirteen-year old Hazel at death’s door or her more recent scare that leaves her father and mother (Sam Trammell, Laura Dern) terrified that the end has come. If Green’s book or the subsequent screenplay errs occasionally by making Hazel far too wise and philosophical for her seventeen years or director Boone gives in to his admiration for actor Nat Wolff (as Gus’ best friend Isaac losing both his eyes to the disease) and allows him to go over-the-top destroying Gus’ trophies in rage when his girl friend breaks up with him (while the couple remains in the foreground trying to have a conversation), these are small miscalculations and part of the genre where pain and sadness must be mixed with absurdity and farce to keep things from getting truly depressing. Once things go really dark in the film’s last forty minutes, the writers and director still manage some fun: egging a house, a rehearsal funeral so that eulogies already written can be practiced. The film never gives in to the grief, mimicking its main characters who never do either.Shailene Woodley and Ansel Elgort, already accustomed to working together from Divergent, play completely different characters here with genuine freshness and undeniable screen sparkle. She has the harder role and is on screen longer, but apart or together, they are an undeniably winning twosome. Laura Dern as Hazel’s loving and very understanding mother is believable and quite wonderful playing an older adult. As her husband, Sam Trammell has less to do but comes through in his one or two important scenes. Nat Wolff makes the teen couple’s best friend Isaac someone we grow to care about with his own erratic journey happening somewhat in the background. Willem Dafoe is impressively crass and callous as Hazel’s beloved author though the script’s climactic use of him in the story doesn’t ring completely true.

The film’s theatrical 1.85:1 aspect ratio is delivered faithfully in a beautiful 1080p transfer using the AVC codec. Sharpness ranges from very good to superb, and color is saturated expertly without any fear of bleeding or blooming. Black levels are likewise very good. Contrast is delivered with consistency. The film has been divided into 28 chapters.

The DTS-HD Master Audio 5.1 sound mix presents the dialogue solidly anchored to the center channel and uses the score by Mike Mogis and Nate Walcott along with a succession of pop tunes well by nicely weaving it all into the front and rear channels. There’s a dearth of ambiance in the use of split effects, but it’s not inherently damaging to the film’s overall effectiveness.

Audio Commentary: director Josh Boone and original author John Green have a mutual admiration society going as they work their way through the film praising all those responsible for making the film possible. (The track was recorded before the film’s release, so they had no idea at the time what a great hit the film was going to be.)Extended Version of the Film (2:12:53, HD): the viewer may choose either the theatrical cut or this extended edition which adds seven minutes to the running time.Deleted Scenes (7:44, HD): six scenes may be watched separately or in montage and with or without commentary from Boone and Green.The Stars Align: Book to Screen (8:21, HD): author John Green talks about his inspiration for the book while director Josh Boone, producer Wyck Godfrey, and stars Shailene Woodley, Ansel Elgort, Willem Dafoe, Nat Wolff, Laura Dern, and Sam Trammell express their delight in getting to bring the beloved material to the screen.Production Featurettes: three brief EPK featurettes that focus on aspects of the production:Photo Gallery: two dozen color photographs showing stills from the film and behind-the-scenes shots of its production.Theatrical Trailer (2:19, HD)DVD/Digital Copy/Ultraviolet: disc and code sheet enclosed in the case.Enclosed Infinity Bracelet: inside the case

The Fault in Our Stars is a lovely romantic story showing love triumphant for a brief moment and in the lasting memories of those who witness its occurrence. The Blu-ray of this tender story offers picture and sound worthy of its source. Recommended!