Death and destruction as punch lines: that’s the droll premise of Luc Besson’s black comedy The Family. While the story of a Brooklyn Mafioso family living a fish-out-of-water existence in northern France might be taken with a tongue-in-cheek smirk and shrug, there’s real harm happening to innocents here (OK, some of them are worthy of an attitude adjustment, but at what cost?), and the film morphs into something deadly serious before its overlong 111 minutes finish unspooling. This kind of bloodthirsty comedy won’t be palatable for a large group of people. 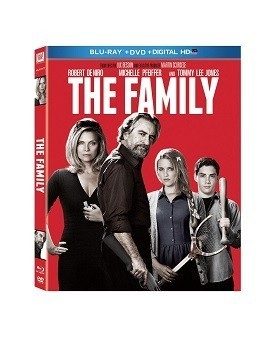 Former Mafia don Giovanni Manzoni (Robert De Niro) and his family have been a painfully difficult group to keep safe in witness protection. Always managing to create trouble wherever they’re moved even to different parts of the world than the United States, they’ve lately been plucked down in a small Normandy town on the coast of France, but even there, the local distaste for Americans have caused Giovanni, wife Maggie (Michelle Pfeiffer), and high school-aged kids Belle (Dianna Agron) and Warren (John D'Leo) to handle their various workaday problems in the only way they know how: by strong arming anyone who gets in their way. But despite their FBI contact Robert Stansfield (Tommy Lee Jones) trying to keep a lid on their whereabouts, the mobsters back home have cast a wide net looking for the stoolies and are zeroing in on their location.Luc Besson and Michael Caleo's screenplay has been based on the novel Malavita by Tonino Benacquista, and while the family’s harsh tactics in dealing with those who transgress against them are sometimes a bit too much (Maggie blows up the local market whose owner jeers at her for wanting peanut butter; Belle and Warren put the beat down on those who try to take advantage of them at school before instituting their own “business” operations), the conceit of family members of a Mafioso using their own gang-style methods to run their own lives could have been really funny without all the death and destruction. The three-man team trying to keep the family safe and under wraps could have been used so much more wittily and with more heart (as is, they love Maggie’s homemade pasta which she brings them regularly while deploring her antics in keeping the neighborhood in check). Once the family is located by the Mob (a freakish accident which is really eyeball-rolling ridiculousness), the tone shifts quite menacingly into a real threat to the safety of all four members of the family. By then, director Besson manipulates things so everyone is in a perilous position, and, all of a sudden and more than a little unbelievably, the composed and aggressive husband, wife, and children seem to have forgotten all their street smarts and have become almost like helpless pawns in a shooting gallery. Subplots with Giovanni being asked to chair a debate after the screening of an American film classic (irony of ironies: it’s Goodfellas) or Belle’s losing her virginity to her math tutor really aren’t done full justice either.Michelle Pfeiffer walks away with top honors here as the dispossessed wife who must constantly adjust to the family’s new living arrangements. Her early-career performance in Married to the Mob will certainly be called to memory with her work here, and it is she who comes the closest to capturing the droll comic tone the director seems to have been after. Robert De Niro is a bit heavier on the pedal as the no-nonsense Giovanni (his trying to get to the bottom of his brown running water problem should have been funnier with less heavy-handed tactics from him and the director), but he gets the job done. Dianna Agron is about as believable as a seventeen-year old here as Maggie Grace was in Taken. There’s genuine hurt displayed when her handsome tutor (Paul Borghese) turns out to be a jerk, and she’s an indisputably appealing actress, but the material lets her and co-star John D'Leo as brother Warren down. Tommy Lee Jones is rather predictable and bland as the harried FBI agent trying to keep them safe. Anthony Desio and Ted Arcidi make positive impressions as the too-trusting FBI handlers who guard the family. Jimmy Palumbo is a coldly sadistic killing machine as assassin Di Cicco.

The film has been framed at its theatrical 2.39:1 aspect ratio and is presented in 1080p resolution using the AVC codec. Strongly sharp and colorful with contrast dialed in perfectly, the image is near-reference quality with lots of detail to be seen especially in facial features as close-ups reveal every crease, crag, and wrinkle in the mugs of both De Niro and Jones. Skin tones are life-like and appealing. Black levels are very good. The film has been divided into 24 chapters.

The DTS-HD Master Audio 5.1 sound mix is a busy and involving surround experience. Not only does the music by Evgueni and Sacha Galperine get the full surround treatment, but there are some very involving split surround effects delivered to the fronts and rears during several of the film’s major set pieces: a couple of violent explosions, the neighborhood barbecue, and the town film screening. Dialogue has been well recorded and has been placed in the center channel.

Making The Family (10:17: HD): the EPK making-of featurette features sound bites from director Luc Besson, producer Virginie Besson-Silla, original author Tonino Benacquista, stars Robert De Niro, Michelle Pfeiffer, Tommy Lee Jones, Dianna Agron, and John D'Leo as well as other members of the crew about the joys of putting the film together.The Many Meanings of F&%* (1:18, HD): a compilation of the various times the f-word is used in the movie.Theatrical Trailer (2:26, HD)Promo Trailers (HD): Out of the Furnace, Don Jon, Runner Runner.DVD/Digital Copy/Ultraviolet: disc and code sheet enclosed in the case.

In different hands, The Family might have been a droll comic gem instead of the rather heavy-handed black comic misfire it has basically turned out to be. Fans of the stars may find moments of it that are enjoyable, but the tone is a mixed bag, and the film just doesn’t quite land as it should. There are no quibbles about the video and audio transfers, however. They’re first rate!

I loved it. Fire me! It's worth watching for Tommy Lee Jones' reaction shots alone. Calling his performance "bland" is a bigger insult than the ones De Niro gives him. What did you want the movie to be? Realistic? Fuggatabout it! You're right about Michelle Pfeiffer though. Its nice to see her in a good role for a change.
You must log in or register to reply here.