There was a golden opportunity in Patrick Hughes’ The Expendables 3 where the filmmakers could have stayed true to what had worked before and then expanded their franchise in a meaningful way to go beyond the series’ first two installments. Sadly, they simply weren’t brave enough to venture beyond a certain point resulting in a film that really scales no new mountains but rather returns to the tried and true with repetitive and wearying monotony. For action movie fans, the explosions and firepower are as prevalent as in the previous two pictures, but even with some new faces around, don’t expect anything fresh or interesting to be dished up for your delectation. 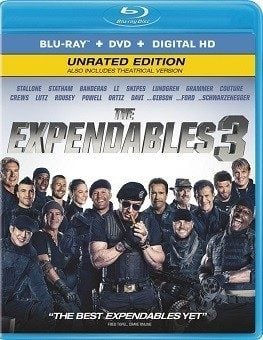 After bungling a mission that gets valued crew member Caesar (Terry Crews) seriously injured, Barney Ross (Sylvester Stallone) decides it’s time to disband the present Expendables team (Jason Statham, Randy Couture, Wesley Snipes, Dolph Lundgren) and form a new group with much younger blood in it. With the help of Bonaparte (Kelsey Grammer), Ross recruits a young tech whiz Thorn (Glen Powell), a slightly unbalanced veteran (Antonio Banderas) who can’t live without fighting, and three well-trained, tough youngsters Mars (Victor Ortiz), Smilee (Kellan Lutz), and Luna (Ronda Rousey). Facing off against his nemesis Stonebanks (Mel Gibson) whom he had presumed dead, Ross and the new Expendables head to Romania with a 72-hour window to bring him down. But Stonebanks has been waiting for an ambush opportunity and lays a trap for the team. Luckily, Ross’ old friend Trench (Arnold Schwarzenegger) had been alerted of the potential trouble and has brought the old team to aid their brothers-in-arms facing overwhelming odds.

Sylvester Stallone, Creighton Rothenberger, and Katrin Benedikt have crafted a screenplay which gives them the chance to introduce new younger blood into the franchise, and then they blow that opportunity by not giving them enough time to establish real personalities for themselves. How interesting might it have been for the young bucks to teach the old dogs new tricks while the old guard shows the youngsters a thing or two about up-close combat? Apart from one moment where the young technology expert Thorn temporarily saves the team when everyone else is stymied (though they don’t allow him to be insightful enough to disarm the surveillance system that allows Stonebanks to keep tabs on his operation at the peril to the Expendables), the film degenerates into the standard attack scenarios we’ve seen in the previous two films where our vastly outnumbered heroes somehow manage to demolish scores of enemy combatants through expert weapons handling (both gun and knife), varying blends of boxing and martial arts, and some acrobatic maneuvers that are of Olympic caliber. Director Patrick Hughes keeps things moving well enough (though two hours-plus of this continual firestorm is a bit much), but he doesn’t put much of an individual stamp on the action scenes or the few scenes where characters actually speak to one another in something other than clichés or insults.

At this point, the series’ regular stars are basically sleepwalking through their roles with not much added to any of their characterizations from previous installments (it is a nice change of pace when Jason Statham has a fit over being abandoned by his brother-in-arms, and there’s a decent running gag with Harrison Ford’s CIA agent Drummer being unable to decipher Statham’s speech). Wesley Snipes plays an expert with a blade (think they got that idea from his franchise Blade?) with a bit of twinkle, and Antonio Banderas serves as basically the comic relief chatterboxing his way through the film and reveling in the chance to mix it up with the bad guys giving the most animated and enjoyable performance in the movie. Though all of the younger faces have fine physiques and do their jobs professionally, they aren’t helped by a screenplay which gives them no real chance at characterization since the emphasis is purely on action. Say what you will about his controversial political and social behaviors, Mel Gibson does have charisma to spare as the film’s uber-villain, and Kelsey Grammer’s natural bonhomie serves as a counterpart to Gibson’s perpetual sneer. Harrison Ford also checks in briefly as a CIA operative who makes the assignments and then inevitably decides to join in the fun.

The film’s theatrical aspect ratio of 2.40:1 is presented in 1080p resolution using the AVC codec. It’s an exceptionally clean and detailed picture with excellent sharpness (much sharper than the previous installment of the series which seemed intent on trying to hide the stars’ ages), and color that seems natural with believable skin tones. Contrast has been dialed in with consistency. Black levels are very good but likely not quite as deep as in optimal transfers. The film has been divided into 16 chapters.

The Dolby Atmos 7.1 sound mix is wall-to-wall bass with the exciting pre-credit sequence a thundering mass of split channel sound effects and Brian Tyler’s percussive score, facets which are carried through the entire running time of the film. While most of the dialogue has been well recorded and has been placed in the center channel, an occasional use of directionalized dialogue hits the spot and makes one wish it had been more thoroughly used.

Dolby Atmos: I watched in Dolby Atmos using a 7.2.4 system (4 ceiling speakers). This was a very aggressive mix that made excellent use of the height channels for localized effects, especially during the action scenes. Boats, planes, helicopters, motorcycles, explosions, and gun fire where just some of the sounds overhead at one point. At the rare time that a battle wasn't raging the mix used the overhead speakers for ambient sounds. The most effective was when Stalone was taking with everyone in an aircraft hanger. His dialog came out of the center channel, but due to the cavernous building you heard a faint echo coming from overhead and all around you. Overall an excellent (and one of the better) Dolby Atmos presentation. -- Adam Gregorich

Unrated Edition: the disc offers the viewer the chance to view either the theatrical cut or the unrated edition. The unrated edition runs five minutes longer but is basically just extensions of scenes already in place.

The Expendables 3 Documentary (51:56, HD): producers Avi Lerner, Kevin King-
Templeton, Danny Lerner, Les Weldon, John Thompson, and Jason Constantine, director Patrick Hughes, and stars Sylvester Stallone, Mel Gibson, Dolph Lundgren, Harrison Ford, Wesley Snipes, Jason Statham, Terry Crews, Antonio Bandaras, and Kelsey Grammer along with younger actors Kellan Lutz, Ronda Rousey, Victor Ortiz, and Glen Powell, stunt coordinator J.J. Perry, and editor Sean Albertson discuss the casting of the film, the characters and how they fit into the story, the Bulgarian locations, their admiration for the hard work of the director and star Sylvester Stallone, the trick of organizing schedules so that this many stars could appear in the same movie, and the premiere of the film at Cannes in 2014.

New Blood: Stacked and Jacked (16:11, HD): each of the actors new to the franchise including the four younger stars as well as Antonio Bandaras, Wesley Snipes, and Mel Gibson comment on their parts and the experience of making the movie.

The Total Action Package (6:40, HD): the actors all comment on being star struck around certain performers they have admired and wanted to work with.

“Christmas Runs the Gauntlet” Extended Scene (2:46, HD): a longer version of a scene from the theatrical cut. If you view the unrated edition, this is the sequence you will see.

There’s not much new under the sun with The Expendables 3 though an action movie fan will likely find just what he’s looking for with the movie (though the PG-13 rating is there because the action involves lots of dead bodies but far less bloodshed than in the previous two R-rated films). There are no complaints about the audio and video quality of the Blu-ray, however; it’s first rate.

I updated Matt's review with some thoughts on the Atmos mix. Short version: It was fantastic!
You must log in or register to reply here.