If you’ve already seen William Friedkin’s The Exorcist, then you’ve seen all the innovation possible in an exorcism scenario that can be found in Steven R. Monroe’s The Exorcism of Molly Hartley. Dull, derivative, and entirely predictable, this made-for-home video horror film evokes more yawns than chills and dooms its actors to replaying a story that was already done to a fare-thee-well more than forty years ago. 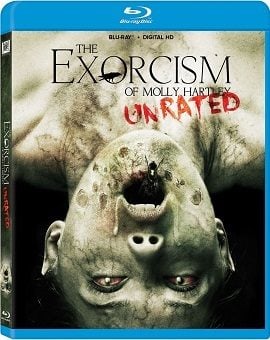 After enduring a demonic possession during her high school years and thinking she had been freed from any further possession, Molly Hartley (Sarah Lind) whizzes through college and law school to become at age 24 the youngest partner in the history of her law firm. But bad things begin happening to Molly now 6 years, 6 months and 6 days after her last encounter with a demon: a couple she takes home for a threesome winds up butchered in her bathtub, and she finds herself confined to the Clovesdale Institute for the criminally insane. Dr. Laurie Hawthorne (Gina Holden) is at first reluctant to believe that Molly is in need of an exorcism despite bile spewed in her face and supernatural events that seem to have no explanation, but once Molly begins levitating, the doctor calls on another resident of the institute Father John Barrow (Devon Sawa) who is there for being the only survivor of a failed exorcism ritual that has stripped him of his clerical standing to help Molly free herself of a demon. But Father Barrow even with the help of his kindly mentor Chaplain Henry Davies (Peter MacNeill) isn’t sure his faith is strong enough to cast out this particularly strong demonic force.

Matt Venne’s screenplay and Steven R. Monroe's direction make sure that those expecting another William Peter Blatty demonic possession experience won’t go away feeling cheated since all of the tropes of the genre are repeated again here (twice, in fact, since the movie begins with Father John’s first unsuccessful effort of wrestling with the devil): the green projectile bile, the levitations, the otherworldly guttural voice spouting profane oaths and contemptuous sacrilege, the hideous makeup on the afflicted actress complete with burned-in skin carvings. But their very familiarity means there is no freshness, no new discoveries to be found in this completely derivative and disappointing script even resorting to the moldy old scenario of having a doctor looking for rational explanations when green vomit projected at her person and a patient floating in midair with an otherworldly voice emanating from her surely suggest only one thing that has nothing to do with a mental disturbance. Yes, after the exorcism is complete, the story isn’t quite over as there are a few “surprising” revelations still to be sprung on the viewer and a final image or two to suggest yet another sequel down the road, but those desperate forays to sustain audience interest only make one aware of the film’s previous lack of success in trying to siphon a new experience from the already chewed and processed material culled from all those demonic possession pictures which appeared after the phenomenal success of the original (plus its own many sequels and prequels).

Kudos to Sarah Lind who, like Linda Blair before her, submitted to obvious hours in the makeup chair and lots of physical abuse to attempt to portray the demon residing inside a reluctant body. Devon Sawa doesn’t quite have the gravitas and seriousness of stature that distinguished Jason Miller and Max von Sydow in the original picture, but he does the best he can with the film’s limited budget and effects. Gina Holden’s psychiatrist seems rather flighty: non-believing one minute and fully convinced the next with no shades in between (the script is likely more to blame for that than her performance), and Peter MacNeill makes a staunch mentor for the uncertain Father John. Daina Leitold is the tragic Janet Jones, the first victim of the demon once Molly enters Clovesdale.

Framed for home video at 1.78:1, the 1080p transfer (AVC codec) is sharp and eminently viewable with subdued colors (except for red in moments where spilled blood is necessary for shock effects). Contrast has been consistently applied, and black levels are certainly above average. The movie has been divided into 28 chapters.

The DTS-HD Master Audio 5.1 sound mix uses lots of instrumental “boo” moments to produce shock (thundering bass on the soundtrack when someone’s eyes suddenly open or something springs forward that seemed dead), and the music is by far the aspect that receives the most specific surround treatment. Elsewhere, dialogue has been recorded well and has been placed in the center channel. Split atmospheric effects don’t get much play in the rear channels being mostly frontcentric.

Director Diaries (4:41, HD): director Steven Monroe hosts a behind-the-scenes look at four locales used before or during the film: the makeup trailer, the padded cell where the exorcism takes place, the black church set for the climactic scene, and the Manitoba, Canada, location for the hospital that stands in for the film’s madhouse.

A very disappointing made-for-home video follow-up to 2008’s The Haunting of Molly Hartley, The Exorcism of Molly Hartley may offer some intriguing promise to fans of the original feature film, but they’re destined to be disappointed by this derivative and unexciting sequel.