Zal Batmanglij’s The East plots a fairly engaging story of domestic guerrilla warfare against corporate malfeasance and allies this with a larger and more interesting canvas of human interactions that change the moral DNA of an undercover agent. With a surprisingly strong cast of familiar faces doing intriguing character work on a low budget project, The East falters somewhat with some of its big surprises but remains a viable entertainment well worth sampling. 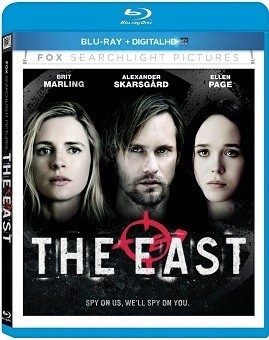 Jane Owen (Brit Marling), an undercover operative with the investigative firm Hiller/Brood, is given her first significant assignment by her boss (Patricia Clarkson) but is warned not to get too overconfident. She’s sent with the alias of Sarah to infiltrate The East, an anarchist collective who has vowed to take revenge on powerful conglomerates who have done what amounts to crimes against people who have used their products or who live innocently in the path of their contaminated waste. The head of the crew, all of whom use fake names, is the charismatic Benji (Alexander Skarsgård) whom it seems everyone in the group is totally devoted to. Jane/Sarah spends weeks with the crew as they plan the first of three strikes and comes to appreciate their brains and their moxie. The first “jam” goes amazingly well as they feed head honchos of a pharmaceutical company some of their company’s supposedly safe product which has poisoned a large number of users. The second target is a company owned by the father of one of the crew’s members, the brooding, suspicious Izzy (Ellen Page), but when that mission partially backfires, Jane/Sarah must reassess if her work is worth her own life or the lives of the people she has come to care about.The script by director Zal Batmanglij and star Brit Marling isn’t quite twisty enough to disguise what turns out to be its unsurprising third act, but until that letdown there are quite a few genuinely involving scenes showing the slow build up of trust as “Sarah” infiltrates the crew. Though the director and his star don’t give the character enough street smarts to make her particularly viable as a credible “spy,” they do show her gradually growing respect and affection for the group’s more unforgettable members: the shaky “Doc” (Toby Kebbell) who was a victim of the drug company they first go after, the tender Luca (Shiloh Fernandez) who first brings Jane/Sarah into the group, and, of course, Izzy and Benji. Director Batmanglij stages the three jams with a decent amount of suspense, particularly the first and third ones, and the gang’s woodsy retreat starts to feel like home in short order, a testament to the actors who seem comfortable there and the director who makes sure we see it as a place of reflection and communion by taking us there often.Having worked together before in The Sound of My Voice, Brit Marling and director Zal Batmanglij make a strong team once again here with Marling’s performance secure and forceful but completely unshowy. Alexander Skarsgård doesn’t have a terrific amount of chemistry with Marling, but there is just enough to convince there’s an attraction there, and he’s completely believable as the charismatic head of this organization. Ellen Page is effective if mostly one-note in her gloomy portrayal of the nihilistic Izzy. Toby Kebbell is quite endearing as Doc, his most effective moment being an emergency operation he must talk Sarah through which he does in whispered, measured tones that give the scene much added power. Patricia Clarkson is Jane’s barracuda of a boss lady while Julia Ormond is one of the corporate victims of her own company’s malfeasance.

The film is framed in its theatrical 2.35:1 aspect ratio and is presented in 1080p using the AVC codec. Sharpness is above average but certainly not razor-edged, and contrast is sometimes slightly milky generating an image that sometimes lacks fine detail and clarity. Color is solid throughout with believable skin tones. Black levels are okay but unexceptional. The film has been divided into 36 chapters.

The DTS-HD Master Audio 5.1 sound mix offers a few ambient sounds in the fronts and rears but doesn’t do nearly enough to establish the proper ambience for the wooded region where much of the action occurs. Dialogue has been well recorded and has been placed in the center channel. Halli Cauthery’s score is given a generous spread through the front and rear soundstages.

Four Deleted Scenes (4:46, HD): may be watched separately or in montage.EPK Featurettes (HD): Five brief behind-the-scenes featurettes dealing with the actors and themes of the film:Examining the Moral Gray (4:28, HD): at a film festival, star Brit Marling and director Zal Batmanglij are interviewed after the screening by Malcolm Glaben.Theatrical Trailer (1:07, HD)Promo Trailers (HD): Runner Runner, Trance, The Way Way Back, Hitchcock, among others.Ultraviolet: redemption code contained in the package

The East is an interesting look at a unique form of domestic terrorism targeting mega-firms who are doing damage to humanity and the environment. A first-rate cast and crisp direction would make this an easy rental selection to recommend.