Another coming-of-age drama of the 1970s, Dick Richards’ The Culpepper Cattle Co. takes its protagonist on a road trip where he not only matures but also has the star dust permanently shaken from his eyes in a film that’s both brutal and imminently watchable set more than a century ago but as vital as if it were taking place today. This is one of those films that deserved a much wider audience at the time and featured a talented cast of supporting players, many of whom would go on to notable appearances in film and on television. 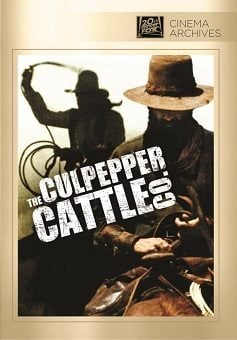 Teenaged Ben Mockridge (Gary Grimes) has always dreamed of being a cowboy, and he gets his chance to apprentice with the profession when cattle driver Frank Culpepper (Billy "Green" Bush) prepares for a lengthy cattle drive from Texas to Colorado. Ben signs on as a “Little Mary,” the assistant to the camp cook (Raymond Guth), but it gets him away from the family laundry business and out onto the trail. He finds once there, however, that the prairie is alive with all kinds of dangers both natural and man-made, and his life falls into jeopardy on several occasions as the team contends with all of the challenges of moving cattle over such a long distance. Eventually Ben gets to strap on his gun belt and chaps and take some responsibility along the way, but the solution to one problem always seems to lead to an even bigger and badder set of circumstances.

The challenges come fast and furiously in the screenplay by Eric Bercovici and Gregory Prentiss. The cattle drivers must contend with violent wind and weather, cattle rustlers, horse thieves, prairie bandits, and land barons all doing their utmost to steal either money or property from Culpepper and company. The action sequences where skullduggery is pulled off (an early cattle stampede is very realistically and frighteningly staged) and retribution is later exacted are all well directed by Dick Richards even if there are one too many coincidental encounters with the various thieving bands after each illegal action has been perpetrated (there are three other points of the compass which would have taken the thieves out of harm’s way). The violence can be brutal when each side is determined to either keep their ill-gotten gains or retrieve what’s rightfully theirs, but the movie doesn’t wallow in the gore, and the violence if often over after a series of quick, short bursts. And it’s not all brutality: the lighter moments as Ben takes his first shot of whiskey or is pushed into a room to lose his virginity are unexpected fun amid the more trying surroundings. The local color of these prairie villages and in a climactic encounter with a group of Mormons looking for their Canaan gives a great amount of veracity to the film; the characters really do seem to fit into this arid, unforgiving landscape.

Gary Grimes gives a fine, sensitive performance as the youngster whose eyes slowly are opened during the course of the movie. He’s polite and appealing and gains gradually in backbone as he begins to form his own opinions about right and wrong. Billy "Green" Bush’s Frank Culpepper is something of an enigma: a tough character but one who doesn’t go looking for trouble and one who goes out of his way not to have confrontations if he can help it. Bo Hopkins and Geoffrey Lewis who join the drive midway through its journey are by far the most colorful of the cowboys in the brigade, each joshing his way through the work but with definite goals in mind and taking no foolishness from anyone else. Raymond Guth tosses off a few wise homilies as the experienced cook while the very young Charles Martin Smith can be glimpsed in the opening moments as Ben’s best friend who envies his imminent journey from home. Hal Needham, who also served as stunt coordinator and would direct many of these types of films in the future, plays a cowboy who meets a relatively early demise.

The transfer is presented in its theatrical aspect ratio of 1.85:1 and is anamorphically enhanced for widescreen televisions. While many long and medium shots are rather softer than one might be expecting, close-ups reveal good detail, and color is appropriate to the brown, dusty prairie where much of the action occurs. Skin tones seem realistic, and the blue skies and the red blood in the shootouts are true to this era of filmmaking (meaning the blood often has the orangey-red look of movie blood). Black levels are mostly mediocre, but there are very few age-related artifacts on display. The film has been divided into chapters every ten minutes so this disc has 10 chapters.

The Dolby Digital 2.0 sound mix is decoded by Dolby Prologic into the center channel. Volume levels are slightly above average but not enough to generate distortion during the stampede and shootout sequences. No age-related problems like hiss or crackle are present either with the dialogue coming across clearly and distinctly, the sound effects quite appropriate to match the on-screen action, and the background score by Tom Scott and Jerry Goldsmith enjoyable but never obtrusive.

One of the better entries in the Fox Cinema Archive program, The Culpepper Cattle Co. is an underrated western with a fine cast and an involving story to tell. Recommended!

For those who might want this on a pressed DVD, as a sort of random sampling two Barnes and Noble stores

within 8 miles of my house have this box set physically available in the store:

Would love to see this come out on Bluray. Many of my favorite character actors in this one, Billy Green Bush, Luke Askew, Bo Hopkins, Matt Clark, and of course the great, late Geoffrey Lewis.
You must log in or register to reply here.