DVD Review The Cowboy and the Blonde DVD Review (1 Viewer)

The Cowboy and the Blonde DVD Review

A spoiled Hollywood star and a naïve rodeo cowboy butting heads on a studio lot: there are the makings for a potentially riotous screwball comedy, but in the hands of B-movie director Ray McCarey, it amounts to very little in The Cowboy and the Blonde, a film that could have offered viewers a tantalizing look behind the scenes of a Hollywood studio or offered a modern-day Taming of the Shrew-style romantic comedy set in Tinsel Town. Instead we get stereotypical characters of no discernible interest and views of the Fox backlot that are stingily doled out and leave us wanting so much more. 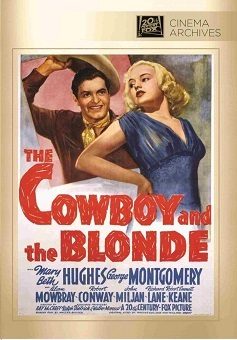 Temperamental star Crystal Wayne (Mary Beth Hughes) drives her producer (Richard Lane), director (John Miljan), and leading man (Robert Conway) mad with her hair-trigger temper and constant demands that delay production on her films, but they make so much money that studio head Phineas Johnson (Alan Mowbray) puts up with her constant tantrums on and off the set. But after Johnson sees champion rodeo cowboy Lank Garrett (George Montgomery) win yet another championship and make the cover a Life magazine, he insists on the good-looking cowpoke to come to Hollywood to make a screen test. With his pal Skeeter (Fuzzy Knight) in tow, Lank doesn’t prove to be much of an actor, but Crystal falls head over heels for him and her entire mood changes when in his presence. Now, the studio chiefs must think of a way to keep Lank around to keep Crystal happy not realizing that the two are falling in love and might leave the studio if they decide to tie the knot.

William Brent and Walter Bullock’s story (final script by Bullock) could have been written on the back of a small envelope so predictable and irritating as it is with a love triangle developing between Crystal, Lank, and studio head Johnson which leads to the expected overheard statements leading to misunderstandings that have been driving this kind of romantic twaddle for centuries, misunderstandings which could be settled in ten seconds if the adults would sit down and discuss with the other party their real feelings as opposed to jumping to lazy and ridiculous conclusions. As Lank stumbles his way around the lot of Consolidated Pictures trying to get his bearings, we get rare glimpses of back lot locations where a western ranch could exist side-by-side with a New York harbor set while the studio commissary, screening rooms, and various soundstages also provide settings for some of the scenes of the film and make for a good deal of the intrinsic interest contained in this otherwise forgettable B-picture.

George Montgomery looks wonderful in his western duds and is very likable as the rodeo star at sea on a movie set (he does a great job being ill-at-ease trying to say memorized dialogue while not noticing the overhead microphone or the camera inches from his face). Mary Beth Hughes is certainly beautiful in that over-coiffed Hollywood style of the early 1940s (think of Betty Grable’s elaborate hairstyles in her musicals for the studio), but her bitchy star who turns on and off her vitriol like a hot water spigot is not very admirable, and one doesn’t ever understand what has made her such a monster or how one good-looking guy can change her so utterly (in Hollywood, wouldn’t she be surrounded by them?). Fuzzy Knight gets in some good comic lines and bits of business as the cowboy’s sidekick, but Alan Mowbray as the studio head makes less of an impression than usual in an important role. Minerva Urecal has some funny body language and makes some fun guttural utterances as Crystal’s maid. Billed fourth, Robert Conway is wasted as the beleaguered leading man, but John Miljan and Richard Lane are good as the director and the producer respectively.

The film’s original 1.37:1 theatrical aspect ratio is faithfully rendered in this standard definition transfer. Sharpness is actually very good, and the grayscale isn’t bad either even if black levels are only mediocre. Contrast has been consistently applied. There are age-related dust and dirt specks throughout and reel change markers are present, but none of these distract much from the action. The movie has been divided into chapters every ten minutes so this disc has 7 chapters.

As with many Fox Cinema Archive offerings, the volume level requires adjustment downward to prevent distortion and to protect sensitive equipment. The Dolby Digital 2.0 sound mix is decoded by Dolby Prologic into the center channel. Fidelity is quite good throughout with the dialogue well-recorded and blended immaculately with the sparse accompanying music and the sound effects. There is hiss present throughout, however, and pops, thumps, and flutter are also to be heard on occasion.

There are no bonuses contained on this made-on-demand disc.

The Cowboy and the Blonde is a pleasant if forgettable romantic comedy programmer from the Fox studio’s B-picture division. The made-on-demand disc while showing definite signs of audio and video age still makes for acceptable viewing for those so inclined.

This disc was also in a set of 4 discs from Fox Archives after the single release reviewed here. All copies they sent me(well, two) of that set, this disc was dubbed only half of the disc area and did not work, of course. On the computer it gave the full amount of GB reading but it wasn't there. The set was withdrawn at my request at AMAZON. This set was for a friend but my earlier single copy was fine. I think they later reinserted a link to the set which also includes Maryland & Scudda Hay.
You must log in or register to reply here.