One of the typically entertaining slaphappy action comedies from Disney during the era immediately after Walt’s death, Robert Butler’s The Computer Wore Tennis Shoes has gentle fun with a preposterous but workable premise: a college student becoming a walking computer. It has the familiar mix of the Disney comedies from that era: appealing young leading players, villains who are nasty but not vicious or scary, and mildly funny build-up to an action climax with a running time that doesn’t overstay its welcome. 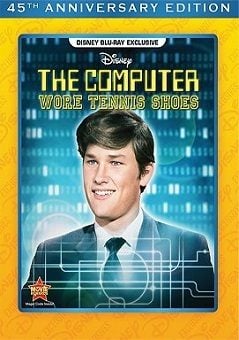 Students at Medfield College operate at a distinct disadvantage due to the cheap, unimaginative direction of its head Dean Higgins (Joe Flynn). When he nixes getting a computer for the college, enterprising students led by Dexter Riley (Kurt Russell), his best friend Pete Oatzel (Frank Webb), and his best girl Annie (Debbie Paine) visit the offices of entrepreneur A.J. Arno (Cesar Romero) to see if they can’t persuade him to donate his computer to the college. Arno, a big time racketeer hiding behind his philanthropic endeavors, decides to donate his computer to the college in place of his usual annual grant which makes Dean Higgins furious, but the computer is installed despite his objections. However, when trying to make some adjustments to it during an electrical storm, Dexter gets zapped while connected to the machine whereby its magnetic tape memory is downloaded into his brain, memories which make him not only a whiz kid at college but also possessing all of the information on Arno’s crooked schemes which with the proper trigger will come spilling out of Dexter’s mouth making him a likely target for extinction once the bad guys learn that he’s capable of broadcasting their operations at the most inopportune moment.

Joseph L. McEveety’s script doesn’t have to be filled with great logic to offer a good time to the viewer, and this one isn’t particularly logical (downloading memory into a human brain from a computer isn’t the same as imbuing the human with the ability to speed read and retain everything he reads, yet both qualities occur once Dexter gets zapped by lightning, only to lose his powers later in the film once he gets heavily jostled during an escape attempt once the gangsters have kidnapped him). But this kind of easy learning/wish fulfillment is very appealing to youngsters making it simple to understand why the film was such a sizable hit in its day. Even if the college scenes don't often ring true or seem much like real college life of the era, director Robert Butler makes the most of his paint-heavy slapstick chase finale with some laugh-out-loud moments when the bad guys get the works or when their jalopy skitters over the road as it encounters the sticky paint thrown at them by the fleeing students. One wishes some comeuppance had been doled out to the selfish, obdurate Dean Higgins who denies his students the tools and facilities to make their college educations worth the price and who is in some ways as much a villain as the more obvious A.J. Arno and his henchman Chillie Walsh (Richard Bakalyan).

By far the most appealing of the younger players is Kurt Russell in the middle of his Disney contract years and offering good looks and an engaging personality as the enterprising Dexter Riley. Frank Webb as his best friend Pete has some spunk, too, as does former child star Jon Provost as another college student Bradley. Debbie Paine, on the other hand, is rather bland as girl friend Annie. As usual, Disney has gathered a top notch supporting cast of outstanding Hollywood character actors to support the young players: Cesar Romero just wonderful as the charlatan A.J. Arno, Joe Flynn as the miserly Dean Higgins, William Schallert as the supportive Professor Quigley, Alan Hewitt as the dean at the competing state-run university trying to steal Dexter once he becomes a genius, and Pat Harrington as the emcee of the college-focused quiz show where the two schools face off for a $100,000 prize.

The film is framed at 1.66:1 for this Blu-ray release offering 1080p resolution using the AVC codec. This is among the very best looking of the Disney Blu-ray exclusives offered in this Disney program with a consistently crisp and artifact-free image and featuring color that’s beautifully saturated but completely under control (a blazing orange/red turtleneck sweater comes to closest to blooming but falls just short of it) and realistic, appealing skin tones. Contrast is also consistently applied with outstanding black levels. The film has been divided into 12 chapters.

The disc doesn’t offer a lossless sound mix, instead presenting the soundtrack as a Dolby Digital 2.0 offering which Dolby Prologic decodes into the center channel. Dialogue has been suitably recorded and is presented clearly with no problems in the mixing with Robert F. Brunner’s background score which lacks a little bass or the atmospheric effects which sometimes seem just a tad anemic. No age-related problems with hiss or crackle are present.

There are no bonus features on this Disney Movie Club exclusive Blu-ray.

Fans of The Computer Wore Tennis Shoes will be simply delighted with the first-class video image provided on this exclusive Disney Blu-ray disc. The movie is offered as part of the Disney Movie Club (www.DisneyMovieClub.com) though you can certainly find it offered for sale with varying prices at Amazon (see below) and through other marketplace sellers.

Love, actors Joe Flynn and William S.
You must log in or register to reply here.