Fox Home Video surprised quite a few film enthusiasts last year by releasing on Blu-ray one of its earliest talkies In Old Arizona, the first sound film incarnation of the Cisco Kid starring Warner Baxter who won an Oscar for his performance in the movie. Its follow-up The Cisco Kid arrived two years later with Baxter again playing the title character and several players from the original film carried over into this new one. While the movie is strong on character and relatively weak in story (it’s only an hour long), it’s a pleasure to see Baxter again performing the role with panache and enjoying the more sophisticated sound filming conditions which the ensuing two years afforded the filmmakers. 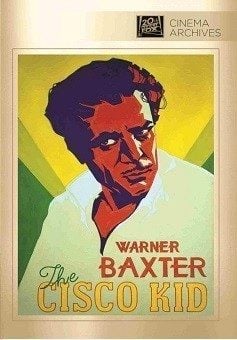 Hearing that the bandit The Cisco Kid (Warner Baxter) is still operating in Arizona, Sergeant Mickey Dunn (Edmund Lowe) who had been his nemesis in an earlier encounter sets out once again to capture him. Cisco had been keeping company most recently with cantina hostess Carmencita (Conchita Montenegro), so self-admitted lady killer Dunn along with his men goes looking for her and arrives at the right moment to take a shot at the escaping bandit. Cisco is winged in the shoulder and finds aid and comfort at the ranch of widow Sally Benton (Nora Lane) and her two children (Douglas Haig, Marilyn Knowlden). Growing fond of the struggling family, Cisco is perturbed to learn that Sally owes crooked bank manager Enos Hankins (Willard Robertson) $5,000, his having swindled her late husband into signing a promissory note that turned the ranch over to the bank if money wasn’t repaid in a certain amount of time. To repay her kindness, Cisco is determined to take the $5,000 from the bank and give it to her, but he knows Dunn is on the lookout for him as is the local sheriff (Frederick Burt) making his planned robbery a very dangerous enterprise.The astounding advances in sound recording in the two-year period between the making of In Old Arizona and The Cisco Kid allow the latter movie a freedom and ease of staging that the former picture wasn’t capable of achieving. Thus, despite all the Oscar wins and nominations for the first picture, this follow-up is actually a more enjoyable experience. Cisco is still a ladies man, but having had his heart broken before makes him wary of getting in too deeply with either of the women who tickle his fancy in this story: Carmencita and Mrs. Benton. As in the earlier picture, music plays a big part: there’s a barbershop number and Baxter warbles a couple of songs, and the contrast between the charming, romantic Kid and the blustering Dunn is just as keenly drawn as before. Cisco also has a delightful kidding camaraderie with his sidekicks Gordito (Chris Martin) and Lopez (Charles Stevens) that makes all of their scenes together quite enjoyable. With such a brief running time, the film’s major set pieces (the assault on Cisco, the bank robbery, the final escape) aren’t nearly as sustained for dramatic purposes as they might have been in a more epic-minded production, and director Irving Cummings also stages a climactic moment in the street featuring Carmencita very poorly though there’s an exciting moment near the end with the little girl Annie that partially redeems his earlier lapse.With better sound recording in this second Cisco Kid sound feature, Warner Baxter’s performance seems more assured and entertaining. He may smile quite a bit for some tastes, but his genuine charm and warmth do come across wonderfully here. Edmund Lowe seems more at ease in this one, too, shown especially well in a dinner scene in which he imparts loads of dialogue while consuming lustily a steak dinner with all the trimmings. Conchita Montenegro imparts lots of personality but at times seems a little stiff before the camera as Carmencita. Nora Lane is more natural but also a bit one-note as the friendly widow. Willard Robertson doesn’t quite make it into the category of hissable villain as bank manager Hankins, but it’s the script’s fault (writer by Alfred Cohn) for not developing his character more fully. Though the two children Marilyn Knowlden and Douglas Haig are sweet, neither has the twinkling charisma that Shirley Temple would bring to Fox in just a few years.

The film’s original 4:3 theatrical aspect ratio is faithfully presented in this made-on-demand disc. There has been no clean-up on the element used, so there are dust specks, occasional scratches, some debris, and missing frames present along with some damage and the expected reel change cues. Grayscale is pretty good for a film of this extreme vintage though black levels aren’t that deep, and the sometimes milky contrast levels prevent a lack of shadow detail that might have been possible. Sharpness is quite good. The film has been divided into chapters every ten minutes so there are 7 chapters present.

The Dolby Digital 2.0 sound mix is decoded by Dolby Prologic into the center channel. All of the expected age-related artifacts that one would find in a transfer which has been given no special attention are here: hiss which is sometimes quite noticeable, crackle, and occasional pops, and music and sound effects which sometimes overpower the recorded dialogue. As has been the case with many Fox Cinema Archive releases, sound levels are exaggerated and must be attended to before beginning the movie to prevent speaker distortion.

Unlike In Old Arizona which got an admittedly unexpected Blu-ray release, its sequel The Cisco Kid has been relegated to the made-on-demand Cinema Archive program, but it’s a film that equals or surpasses the earlier movie in sheer enjoyment, and for fans of the character (who would go on to have a long life at Fox later in the 1930s and 1940s before moving on to Monogram and then into television), this film would appear to be a must despite the less than thrilling elements Fox has on hand for this release.

"Went The Day Well?" Included in the Blu Ray Set "Their Finest Hour" From The Film Movement.