One of the most stylistic and influential silent movies ever made and a film whose impact still has far reaching effects almost a century after its first showing, Robert Wiene's The Cabinet of Dr. Caligari is certainly a film for the ages. And now with a striking restoration of its ancient elements, the film has a sheen and clarity that it hasn't had for decades. Those who know this unsettling drama only from highly contrasted or dark 16mm prints or badly transferred home video releases will now be able to see subtleties in the backgrounds and details in facial expressions that definitely give the movie greater resonance than even its most ardent fans might have guessed it possessed. 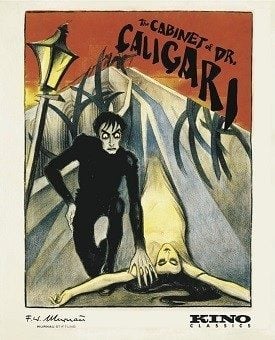 Young student Francis (Friedrich Fehér) relates a strange, sad tale to an acquaintance sharing a park bench with him. It’s the story of a mystical carnival barker Dr. Caligari (Werner Krauss) and his sideshow attraction, the somnambulist Cesare (Conrad Veidt). His story details two murders in the town of Holstenwall which included the town clerk and Francis’ best friend Alan (Hans Heinrich v. Twardowski), both of which were blamed on Cesare carrying out the bidding of his master. When Cesare tries to abduct Francis’ fiancé Jane (Lil Dagover), the police chase him down, and he dies from his exertions, but there is still the matter of proving that the evil Dr. Caligari was the mastermind behind the murders. Art directors Walter Roehrig, Walter Reimann, and Hermann Warm have designed a nightmarishly expressionistic world of crooked streets, twisted doors and windows, light burst effects on floors and spidery designs on walls and doors, and in general a cockeyed view of the everyday, but there’s method in their madness though to say more would spoil not only the film’s general effectiveness but also one of the great surprise endings in all of silent cinema. Though on the surface it’s a simple melodrama of demented individuals carrying out their nefarious plans, a look under the surface reveals a likely more complex scenario, likely the first ever with an unreliable narrator as our guide where Francis is the probable killer of Alan, his rival for Jane, and thus presents a logical reason for his current residence which we see at the end of the movie (notice how he mimics Cesare’s walk clinging to the walls just as the somnambulist does, notice his real lack of grief on learning of the tragedy and how many times he mimics the stabbing motion of the killer and how earnest he is to blame the murder on a convenient scapegoat who may indeed have killed the clerk who insulted his master. This version has snipped it, but in the 16mm version of the film I first saw in an international film studies class in the 1970s, the clerk called Caligari a “fakir” before issuing him a license to perform). Director Robert Wiene uses the iris ins and outs of the period to focus specifically on an individual face or object, and even on the small, sometimes primitive sets, there is a great deal of unsettling ambiance to take in, all wonderfully guided by Wiene’s sure hand.For much of the film, Werner Krauss gives a florid pantomime performance as the dastardly Dr. Caligari with his arching eyebrows and odd, mincing gait, but there’s a reason for this, too, as we understand once we’ve arrived later in the film, and the contrast between his Caligari and his Director demonstrates his enormous gifts being put to terrific use here. The impossibly young, lithe Conrad Veidt is Cesare, his heavy makeup and zombie-like body movements the inspiration for countless macabre creations in the silent and early sound eras. Friedrich Fehér gets to run the gamut of emotions as the forlorn Francis reliving his sad story to whoever will listen. Though Lil Dagover spends much of the movie in a seeming stupor, her more “normal” moments show a lovely actress. Hans Heinrich v. Twardowski as Alan and Rudolf Lettinger as Jane’s father do what they can with their abbreviated roles.

The film is presented in 1.33:1 and is offered in 1080p resolution using the AVC codec. Though taken from as much of the camera negative as was available (the first reel was missing as we’re informed in a pre-credit screen card) and tinted using vintage prints as a guide, the image quality is generally very good to excellent. These elements are ninety-four years old, so the negatives contain spotted print damage that shows up on a regular basis and a few scratches, some very brief and one a little more prolonged later in the film. Still, clarity and sharpness are miles ahead of any previous attempt at bringing the movie to home video, and black levels, while not the deepest you’ll ever experience, are impressive for a work of this vintage. Contrast has been consistently maintained. The film offers the original German intertitles (in a suitably expressionistic font) with white English subtitles that are very easy to read. The film has been divided into 10 chapters.

The Blu-ray disc offers a choice of two DTS-HD Master Audio 2.0 stereo music accompaniment tracks. The first from the University of Music, Freiburg offers a traditional period track that’s enormously effective. The second is by Paul D. Miller, a techno-styled accompaniment that may seem a bit modish for the vintage visuals but works in its own way though my own preference is for the first (default) track.

Caligari: How Horror Came to the Cinema (52:52, HD): Rodiger Suchsland’s German documentary covers the influences and sociological pressures of the pre-World War I period in Germany that led to the expressionistic cinema movement of the postwar era as well as the rise of the youth movement in Germany so vividly reflected in this film and in others of the same period. English subtitles are provided.Image Gallery: forty-three black and white and color images from the film and publicity art.Restoration Demonstrations (1:17, 2:42, HD): two brief split-screen demonstrations of sequences from the film in transfers available before and after the 4K restoration.Trailer (1:07, HD): a trailer advertising this home video release rather than a theatrical trailerPromo Trailers (HD) three other Kino efforts are advertised: Die Nibelungen, Metropolis, Nosferatu. Booklet: includes some tinted stills and an informative essay by film historian Kristin Thompson detailing the rise of German expressionism, the spread of the movement abroad, and the influences of Caligari in other German and non-German films.

One of the true classics of silent cinema and a film of much more depth and profundity than it’s often credited for having, The Cabinet of Dr. Caligari looks far better than any film of this age has a right to look. Highly recommended!

Blind preorder made. Have always wanted to see this classic. Happy to
support Kino's effort.

I own the UK BLU. but honestly hate that music score. I wonder if I would like the other one included on the U.S. release.

I wonder if the image quality is different between the Eureka / Kino editions. I thought the UK Blu looked amazing. I wouldn't judge it against a film transfer of today but I'd give it a very high rating.

Powell&Pressburger said:
I own the UK BLU. but honestly hate that music score. I wonder if I would like the other one included on the U.S. release.

I wonder if the image quality is different between the Eureka / Kino editions. I thought the UK Blu looked amazing. I wouldn't judge it against a film transfer of today but I'd give it a very high rating.
Click to expand...

The MoC and Kino editions are based on the same 4K restoration. The A/V quality should be very similar.

Got this today and am very disappointed. The overall image and restoration is nice but there is pixellation throughout the film in the dark areas of the screen. It is most pronounced in the dark areas when the camera irises in during closeups. If you have the disc, look at the start of chapter 3, it is very noticeable on the silhouetted backs of the audience watching Caligari on stage. I assume this is due to a mastering error. The bitrate dips very low in some places, often corresponding with the digital blocking. I'm shocked that Kino would release this title with such obvious issues. Unless I happen to have a disc from a bad batch, I assume all discs are affected. Can anyone else confirm? I will probably return my disc to Amazon and hope that Kino issues a replacement disc.
You must log in or register to reply here.