Early in David Cronenberg’s career directing features, he formed a story around the pain he felt during an acrimonious divorce and custody experience with his wife. Through Cronenberg’s unique creative vision and lens, The Brood was created. Dramatically his most expressive work at that time, and its examination of divorce and custody through the formula of a horror film fascinating. Though as a whole The Brood, seems less focused and formed than almost every other piece from the Canadian cinematic master. 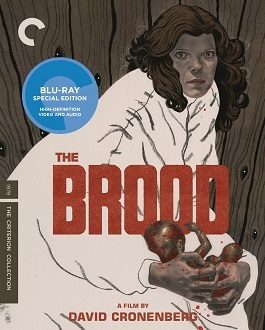 “They're her children. More exactly, the children of her rage.”

Frank Carveth (Art Hindle), estranged from his wife, Nola (Samantha Eggar) who is under the unorthodox care of psychotherapist Dr. Hal Raglan (Oliver Reed), suspects his wife is mistreating their daughter due to the bruises and scratches he finds on her back to following a stay with her mother at the medical facility. Attempting to halt his daughter’s visits at the facility where the alleged abuses took place, Frank investigates the care his wife is receiving under the unusual Dr. Haglan and his theatrical therapy techniques, but when his mother-in-law is attacked in her home, murdered by what is described as a deformed child, he realizes something far more bizarre as afoot.

Director David Cronenberg has long held a fascination with the sciences and the physical manifestations and combinations possible under these sciences. Later in his career, his fascination with the human mind and body – and its interaction with the world, criminal and otherwise, around them, would punctuate his commentary. Yet, his early career held a fascination, and his commentary infused by his view on the effects of science and technology on who we are as a society. With The Brood, his commentary is sharply focused on the world of psychology, and is informed by his personal distresses contending with a divorce and custody battle. Those experiences, specifically, create the unsympathetic and self-centered character of Frank’s wife, played with full embrace by Samantha Eggar, and drive the horror conceit at the heart of The Brood.

Further, Cronenberg’s experiences helped create the unusual Dr. Hal Raglan character, played with whispering grandeur by Oliver Reed. As a result, we are supposed to find Haglan a narcissistic fraud, oblivious to the cult-like hold he has on his patients, but he is by far the film’s most interesting character. He is narcissistic, and quite oddly, oblivious to what he is helping create, but he remains likeable nonetheless (Reed’s quality as an actor helps). However, The Brood isn’t a success. The film has the right ingredients for a good movie. David Cronenberg at the helm, channeling his real-life pain, talented actors devouring their lines, and an unusual horror conceit driving the drama. Nevertheless, precious little works when all the pieces are put together. The film is less terrifying or horrifying than silly. The brutality of the killings we witness undone by the premise we come to realize is creating them. Among the many laudable qualities of Cronenberg’s films is focus and patience. The Brood seems unfocused, meandering between mystery and horror, vacillating between a commentary on the abuses of psychiatry and the insanity of a system that will blindly favor the mother in custody proceedings. Not that these elements can’t exist within the same narrative, but The Brood struggles to bring cohesion to its vision.

Importantly, The Brood is an interesting entry in Cronenberg’s oeuvre, and though it may fail as an accomplished piece of horror (in the way The Fly or Rabid does), or successful social commentary (in the way Crash or Videodrome does), it does however serve as an example of this writer/director’s skills at bringing even the most outlandish and unusual ideas into the cinematic realm with great grounding and even excellent dialogue among the more bizarre ideas. And the film’s denouement is replete with grotesque, shocking imagery – memorable even, solidifying praise for Samantha Eggar’s fearless performance.

Criterion presents The Brood in 1.78:1, director Cronenberg’s preferred aspect ratio for the film. Filmed in 35mm, this latest presentation of the film – a newly 2K digital transfer supervised by Cronenberg, is nicely crisp, sharp colors, pleasing detail, with natural flesh tones and excellent color balance throughout. According to the accompanying booklet, thousands of instances of dirt, debris and scratches were manually removed (using MTI’s DRS). Small dirt and grain, etc., were managed by Digital Vision’s Phoenix.

As the booklet mentions, there are, however, moments of wear and damage present, (as with the soundtrack), the result of the condition of the existing elements, but they are fleeting.

Criterion’s presentation of The Brood comes with its original monaural soundtrack, remastered at 24-bit from the magnetic reels. A crisp audio, with reasonable depth especially in the dialogue. The real star here is Howard Shore’s score. Shore, Cronenberg’s longtime collaborator, has created a magnificent range of musical scores for the writer/director, the highlight perhaps being the bold and brilliant The Fly. With The Brood, Shore opens with tense strings which reminds of Bernard Herrmann, and he musically articulates emotion and horror with great economy.

A fine collection of special features, including a new documentary featuring key players from in front and behind the camera.

The gem of the collection is the 2K restored transfer for Crimes of the Future, a welcome opportunity to see an early Cronenberg works, filled with his familiar themes of body/science abuses and dystopic views of where such abuses can/will lead us.

Interview from 2013 with actors Art Hindle and Cindy Hinds

I’ll admit I am surprised that The Brood did not work well for me. There are elements that work well. For example, the initial mystery, and the performances from the lead actors, with Oliver Reed’s Dr. Raglan and Samantha Eggar’s simmering portrayal of a lady unhinged being quite special. In contrast, there is something in the pacing, the staging, and in the culminant horror, that plays unfocused and holds the film back from resonating.

Criterion’s presentation of The Brood is just about perfect and fans of Cronenberg’s works should pick this up, despite not being a particularly strong film, if for no other reason than to examine how Cronenberg continued to form his rise as one of cinema’s most important voices.

I really enjoyed The Brood when I re-watched it on the Criterion Disk several years ago; incredible film, and one of Cronenberg's best. I feel his best films are the ones he directed in the '70's - '80's, i.e. The Brood, Shivers, Rabid, Videodrome, Scanners, The Fly, The Dead Zone, Dead Ringers, etc.

And, even when compared to the other films that Cronenberg made during this era, The Brood is especially frightening. The idea of a disturbed woman's psyche "birthing" these baby monsters/demons that attack anyone she hates is quite horrific. And, though the effects were minimal re: these creatures, they were still extremely effective.

The cold winter setting also added to the unease that was palatable throughout the film.