The Bridge, a new Blu-Ray release by Criterion, is said to be the first anti-war film about World War II to come out of Germany. Released in 1959, it received an Academy Award nomination for Best Foreign Language Film, losing to Black Orpheus. It is based upon a best-selling novel by German author Manfred Gregor (real name: Gregor Dorfmeister), who based the book on his person experiences during the final days of the war. When it was released it was acclaimed as one of the most powerful anti-war films ever made. 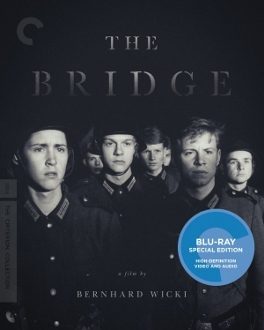 A soldier who defends just one square meter of ground defends Germany.

The Bridge opens in an unidentified town in Germany in April, 1945. The Allies are closing in on Berlin, but the war has left this town relatively unscathed. This is not to say that the residents have not suffered. Most of the men are either in combat, desperately trying to slow down the onslaught of American tanks, planes, and soldiers, or they are dead. Food is scarce and some of the mothers in town have not heard from their husbands in weeks. Strategically, the town is unimportant but for the fact that it adjoins a river which can be crossed only by way of a sturdy, stone bridge. The German cause is hopeless, but Hitler has ordered the Army to fight to the last man.

Among those who believe that Germany can still turn the tide of the war are male teenagers who attend the local school. A large map in their classroom tracks where the opposing armies are fighting, and the boys eagerly update it whenever more war news is reported. Their teacher tries to gently warn them that the end is near, but the boys regard any negativism as defeatist. Apart from the war, they have the same concerns which afflict teenage boys everywhere. All of that comes to a halt when, at the end of a school day, they learn that draft notices have been received and they have to report for military duty the next morning. Their mothers and their teacher know that their inductions into the Army are fraught with peril, but the boys are excited about the prospect of donning uniforms and defending their country.

In fact, the boys receive only one day of basic training before they are ordered to the front in the middle of the night because of a breakthrough by the Americans. The boys' teacher, who is alarmed at the prospect of seeing his untrained students sent into battle, prevails upon their commanding officer to leave them behind to "defend" the town's bridge. In fact, unbeknownst to the boys the Army's plan is to blow up the bridge in order to force the Americans to bypass the town. What happens next is both shocking and dismaying.

The Bridge deservedly brought director Berhard Wicki international fame, which led Hollywood to come calling and he had the opportunity to direct such notable actors as Ingrid Bergmann, Anthony Quinn, Marlon Brando, and Yul Brynner (he also directed the German episodes in The Longest Day). Wicki, who died in 2000 at the age of 80, described his purpose in making The Bridge: "I meant to show that to die or to be a hero means absolutely nothing if it's not for the right cause." It is a point worth pondering, and The Bridge is a gut-wrenching film which viewers will not soon forget.

The black & white 1080p image is framed in the film's original aspect ratio of 1.37:1. It is encoded with the AVC codec. The striking cinematography by Gerd von Bonin is rendered flawlessly. Contrast is strong, black levels are solid, shadow detail is excellent, and the image is very sharp. There is no sign of damage or other age-related anomalies, and a natural level of film grain has been retained. This transfer reportedly was made from a 2K restoration, and it is terrific.

The German soundtrack is reproduced in uncompressed LPCM 48K mono. It is surprisingly powerful during the combat scenes. There is no other audio option. The easy-to-read English subtitles appear to be forced. Although the menu suggests an On-Off option, I am unable to turn the subtitles off.

The extras on this Blu-ray disc include a new interview with Gregor Dorfmeister, upon whose novel The Bridge is based. Dorfmeister was a teenager who was conscripted into the German Army during the last days of World War II. The interview is shown in high definition and is framed at 1.78:1. The interview is conducted in German, with English subtitles.

An interview with the late Bernhard Wicki was conducted for a German television talk show in 1989. He considered his filmmaking style to be neorealism, and he cites as influences Rossellini, De Sica, and Visconti. This interview also is done in German with English subtitles, and is shown with an aspect ratio of 1.37:1.

A new interview with German film director Volker Schlöndorff (The Tin Drum) explores the impact which The Bridge had on young Germans and how the New German Cinema school of filmmaking was influenced by Berhard Wicki. The interview is shown in high definition and Schlöndorff speaks excellent English.

The final supplement is an excerpt from the 2007 documentary Against the Grain: The Film Legend of Bernhard Wicki. The documentary was produced by Wicki's widow in 2007, and this excerpt focuses on the making of The Bridge. The documentary is framed at 1.78:1 and the picture quality is understandably variable because much of it is behind-the-scenes footage shot while The Bridge was being made.

Also included with the Blu-ray disc is a booklet with an informative six-page essay by Terrence Rafferty.

The Bridge is a powerful anti-war film which was released in Germany during a period when German war films focused on the "good" Germans who fought during World War II. Bernhard Wicki makes a convincing case that by 1959 younger Germans were fed up with those films, and they wanted to see an honest depiction of how their country was nearly ruined. That is precisely the void which The Bridge filled.