Back in January of 2015, Twilight Time released a spiffy Blu-ray edition of Francois Truffaut’s somewhat Hitchcock-inspired thriller The Bride Wore Black. For those who aren’t into Blu-ray or who don’t want to go the Twilight Time route, MGM MOD is offering an alternative: a DVD-R version of the film. But is it actually a standard definition port of the high definition master Twilight Time presented, or is it something else? See the video and audio comments for further illumination. 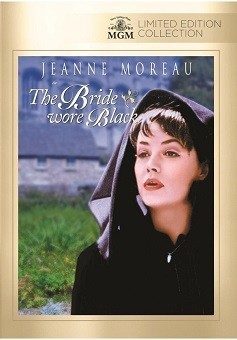 Prevented from taking her own life, Julie Kohler (Jeanne Moreau) begins murdering a series of men, each in a different way, and it’s not until the one hour mark in the movie that we finally see the reason why: directly after her marriage ceremony as the wedding party is leaving the church, her husband is accidentally shot and killed. Though only one (Daniel Boulanger) of the five men in the room actually pulled the trigger, all five agree to keep mum about the shooting, and this sets the grieving widow on her murderous revenge spree. As it turns out, the murders tend to become more difficult the longer she goes on with her plan, not because of police intervention or the remaining men informing the others to be on guard but simply because of circumstances which occur that make carrying out her plans not the freeing symbolic gesture she assumed it was going to be.

Jean-Louis Richard and François Truffaut collaborated on the script (based on a story by Cornell Woolrich), and while there are vagaries in the story (how did Julie identify the five men when they were all from different walks of life and only met for card games and drinking in private?) and some sloppiness in some set-ups (the first murder is poorly staged – Hitchcock filmed falling from great heights much more imaginatively), the film is, despite all of the death, also aglow with some of Truffaut’s wonderful lyricism: the white scarf wafting away in the updraft after her first killing symbolizing her lost innocence, the Hitchcockian point of view camera shots especially following a little boy on his walk home, a brilliant montage as Julie poses for the artist Fergus (Charles Denner) as the director jump cuts between the model and the sketches, an evocative wooden puppet figure on the wall whose head drops as the door shuts, symbolic of the artist losing his head over Julie not realizing she’s out to kill him. Truffaut doesn’t set out to make the murders especially gruesome (this isn’t Psycho or The Birds), but there’s a kind of shuddery horror present as she calmly watches the milquetoast (Michel Bouquet) die from poisoning, and we are brought into the final two murders either after the fact or after it occurs off-screen.

Contrary to the charming joie de vivre that she displayed during much of Truffaut’s Jules et Jim, Jeanne Moreau here is almost like the walking dead. She can be animated for a few moments when necessary (playing with the child to allow her to convince the father of her good intentions), but so much of her character is obviously dead inside (a telling conversation with a priest during confession late in the movie is a magnificent moment) that Moreau can let her pained eyes and stillness do the acting for her. Brilliantly dressed in either black or white or both throughout the film (symbolizing both her widowed and virginal states: she never got her wedding night, and she had saved herself for it), the character remains a fascinating one. As the five victims, most of whom are rampant chauvinists and unapologetic womanizers, Claude Rich, Michel Bouquet, Michael Lonsdale, Daniel Boulanger, and Charles Denner are all superb, especially Denner whom we see change as he ironically falls in love with his eventual killer (further irony: she’s playing Diana the Huntress as his model and in life). Jean-Claude Brialy has some key moments as a friend of a couple of the murdered men who helps put together the identity of the killer.

The transfer is framed at 1.66:1 and is anamorphically enhanced for widescreen televisions. This is not the same master used for the Twilight Time transfer. It’s very dirty, filled with dirt and dust specks and some damage along the way as well as some obvious moiré patterns. Sharpness teeter-totters throughout (long shots are almost always overly soft), and color is likewise variable: sometimes quite lovely and realistic and other times seeming a bit pasty and thick. Contrast is also inconsistent. The film has been divided into chapters every ten minutes so this movie has 11 chapters.

The Dolby Digital 2.0 mono mix is decoded by Dolby Prologic into the center channel. The MGM MOD only offers an English dub track and not the original French. It’s obviously Jeanne Moreau doing her own dialogue looping, but the identities of the other voice actors are unknown. Of course, as with all dubbing during this period, it’s a dry, unappealing kind of vacuum of sound with these voices plastered onto the soundtrack (whoever is dubbing for the little boy Cookie is obviously not five years old). The outstanding background music by Bernard Herrmann (with occasional Vivaldi riffs) sounds a little louder than it ought to sound mixed with the dialogue though it doesn’t exactly drown it out; it just seems a trifle overpowering. There is some hiss along the way as well.

One of François Truffaut’s seminal works of the 1960s, this MGM MOD release of The Bride Wore Black doesn’t really do justice to the movie's quality. Not only does the Twilight Time Blu-ray offer superior audio and video, but it contains a terrific audio commentary track among other worthwhile supplements. That’s the one to go for!