François Truffaut took some motifs from Alfred Hitchcock and mixed in his own unique blend of character-laden melancholy to come up with The Bride Wore Black. Appearing in the latter part of the cynical 1960s, The Bride Wore Black most appropriately offers Truffaut a chance to present a revenge quasi-fantasy featuring one of the actresses who responded most glowingly to his direction but this time in a completely different type of role, a fascinating one which takes multiple views to understand and appreciate the layers of emotions that are being buried deep inside a mask of numbed shock and regret. 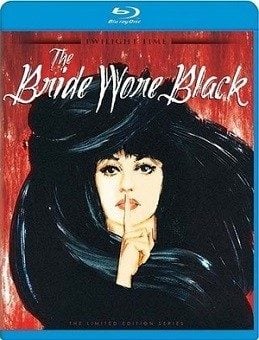 Prevented from taking her own life, Julie Kohler (Jeanne Moreau) begins murdering a series of men, each in a different way, and it’s not until the one hour mark in the movie that we finally see the reason why: directly after her marriage ceremony as the wedding party is leaving the church, her husband is accidentally shot and killed. Though only one (Daniel Boulanger) of the five men actually pulled the trigger, all five agree to keep mum about the murder, and this sets the grieving widow on her murderous revenge spree. As it turns out, the murders tend to become more difficult the longer she goes on with her plan, not because of police intervention or the remaining men informing the others to be on guard but simply because of circumstances which occur that make carrying out her plans not the freeing symbolic gesture she assumed it was going to be.

Jean-Louis Richard and François Truffaut collaborated on the script (based on a story by Cornell Woolrich), and while there are vagaries (how did Julie identify the five men when they were all from different walks of life and only met for card games and drinking in private?) and some sloppiness in some set-ups (the first murder is poorly staged – Hitchcock filmed falling from great heights much more imaginatively), the film is, despite all of the death, also aglow with some of Truffaut’s wonderful lyricism: the white scarf wafting away in the updraft after her first killing symbolizing her lost innocence, the Hitchcockian point of view camera shots especially following a little boy on his walk home, a brilliant montage as Julie poses for the artist Fergus (Charles Denner) as the director jump cuts between the model and the sketches, an evocative wooden puppet figure on the wall whose head drops as the door shuts, symbolic of the artist losing his head over Julie not realizing she’s out to kill him. Truffaut doesn’t set out to make the murders especially gruesome (this isn’t Psycho or The Birds), but there’s a kind of shuddery horror present as she calmly watches the milquetoast (Michel Bouquet) die from poisoning, and we are brought into the final two murders either after the fact or it occurs off-screen with only blood-curdling screams to let us know what's happened.

Contrary to the charming joie de vivre that she displayed during much of Truffaut’s Jules et Jim, Jeanne Moreau here is almost like the walking dead. She can be animated for a few moments when necessary (playing with the child to allow her to convince the father of her good intentions, or posing as the huntress Diana), but so much of her character is obviously dead inside (a telling conversation with a priest during confession late in the movie is a magnificent moment) that Moreau can let her pained eyes and stillness do the acting for her. Brilliantly dressed in either black or white throughout the film (symbolizing both her widowed and virginal states: she never got her wedding night and she had saved herself for it), the character remains a fascinating one. As the five victims, most of whom are rampant chauvinists and unapologetic womanizers, Claude Rich, Michel Bouquet, Michael Lonsdale, Daniel Boulanger, and Charles Denner are all superb, especially Denner whom we see change as he ironically falls in love with his eventual killer. Jean-Claude Brialy has some key moments as a friend of a couple of the murdered men who helps put together the identity of the killer.

The transfer has been framed at 1.66:1 and is presented in 1080p resolution using the AVC codec. While sharpness is overall quite satisfying (though rarely razor-sharp) and the transfer is free from age-related dust and debris, color varies a bit from strong and solid with very good skin tones to sometimes a bit faded looking (during some shots in the climactic prison sequence). Black levels range from fair to very good with generally good consistency in contrast management. The English subtitles are in yellow and are very easy to read. The film has been divided into 24 chapters.

The disc offers the original French language track and an English dubbed version, both in DTS-HD Master Audio 1.0. I listened exclusively to the original French language track which, due to post-dubbing, has that often flat, dry sound all too often notable in such sound mixes of the era. The outstanding background music by Bernard Herrmann (with occasional Vivaldi riffs) never clashes with the dialogue or sound effects but naturally doesn’t have the resonance that modern sound design would offer such an effective, dynamic score.

A handsome high definition rendering of one of François Truffaut’s seminal works of the 1960s (the DVD is currently on Fox’s Cinema Archives label, a review of which is soon forthcoming), The Bride Wore Black is certainly a movie film aficionados will rush to embrace. There are only 3,000 copies of this Blu-ray available. Those interested should go to www.screenarchives.com to see if product is still in stock. Information about the movie can also be found via Facebook at www.facebook.com/twilighttimemovies.

One of my favorite Truffaut films and a excellent Bernard Herrmann score. Have the old MGM dvd so this is a easy buy even if the price is kinda high. Hope one day for Two English Girls to arrive on Blu-ray soon and there is talk Criterion will release it.
M

Thanks for the review Matt. Is the final rating right?

Mike2001 said:
Thanks for the review Matt. Is the final rating right?
Click to expand...

No, and thanks for catching it. It'll be fixed immediately.

I bought this Blu-Ray. The dubbed version played fine, but the French version had no sound. Has anyone else had this problem? Thanks.
You must log in or register to reply here.