The Boy Next Door Blu-ray Review

A high school teacher, separated from her cheating husband, has a one-night stand with one of her students living in the house next door, leading to disastrous results in director Rob Cohen’s low-budget would-be thriller The Boy Next Door. Not even a solid performance from Jennifer Lopez can save this film. 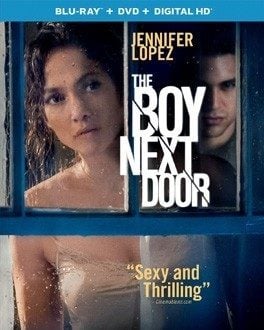 Claire Peterson (Jennifer Lopez) is an English Literature teacher at the local high school, currently separated from her husband Garrett (John Corbett) after he had an affair with his secretary, raising her teenage son Kevin (Ian Nelson), who attends the same high school and has a crush on Allie (Lexi Atkins), a blonde classmate working at the hardware store. When Claire’s garage door jams, her neighbor’s nephew, 18-year old Noah (played by 27-year old Ryan Guzman) comes to the rescue, managing to get the door open and offers to repair it. An uneasy attraction begins between the two, even after Noah enrolls as a senior at the same high school Claire teaches at and becomes one of her students. Noah begins hanging out with Kevin, offering gifts such as collectible editions of classic literature to Claire. One evening, in a moment of weakness, Claire gives in to her loneliness and has a one-night stand with Noah. Claire tries to dismiss it as a mistake, but Noah becomes obsessed with her, resorting to stalking and later violent behavior, all leading to a very predictable conclusion.

Anyone who has read many of my reviews here on Home Theater Forum probably knows I’m a sucker for low-budget movies that know, up front, that they are what they are - exploitation. What makes movies like Joe Dante’s Piranha and The Howling, The Incredible Melting Man, Sam Raimi’s Darkman, even the recent Wolfcop, entertaining is that they never take themselves too seriously and exist within their own world of logic. And that is where The Boy Next Door ultimately fails. It asks the audience to take way too much for granted and to suspend their disbelief way beyond expectations for the world in which the film takes place, modern day suburbia. Claire is too smart to allow a student, even one as “hunky” as Ryan Guzman’s Noah, to flirt and woo her. This would not only jeopardize her job, but her life as she knows it. Then there is the casting of Guzman, with whom the audience is supposed to believe is only 18 years old; he’s a good 9 years older, and looks it, especially when seen with Claire’s son Kevin, played by Ian Nelson, who does look like a high school teenager. Rob Cohen has made some pretty good thrillers, including XxX, The Fast and the Furious, and even Stealth. However, The Boy Next Door is so by-the-books and unoriginal, that it is ultimately predictable, lacking any kind of suspense, and takes its subject matter way too seriously.

Photographed using the Arri Alexa XT camera, it comes as no surprise that the 1080p transfer, compressed using the AVC codec, looks spectacular on Blu-ray. Colors are consistent and well-saturated. Black levels are exceptional, particularly during many of the night time sequences, with no visible crush or banding. Detail shines on this disc, allowing the viewer to see the textures in the fabrics worn by the actors, as well as minute details in the set design.

The DTS-HD Master Audio 5.1 soundtrack is quite good, but does not deliver much in the way of a sonic punch. Dialogue is directed mostly to the center channel, and remains clear throughout. The score by Nathan Barr and Randy Edelman is spread mostly across the front channels. Surrounds kick in minimally with atmospheric effects and an occasional discrete sound effect, with an almost lifeless LFE channel that at best sounds anemic during the brief action sequences. It basically does what it needs to do, and nothing more.

Audio Commentary with Director Rob Cohen: The director talks very proudly of his film, including working on a very limited budget, shooting with the Arri Alexa, the casting process, among others. One thing that I found very interesting was how he convinced Jennifer Lopez to agree to let him shoot the love scene the way he wanted to.

The Making of The Boy Next Door (1080p; 9:17): A lot of information is compressed into this nine minute featurette, including interviews with Rob Cohen, Jennifer Lopez, producer Jason Blum, and producer Elaine Goldsmith-Thomas, as they discuss the many aspects of making the film.

Deleted Scenes (1080p; 9:34): Five scenes are included here, without any commentary: Vicky Wants to Help Claire, Noah Runs Into Claire, Garrett Asks Claire Out on a Date, Claire Asks Vicky For a Favor, and Claire is Angry at Vicky.

DVD Copy: The movie in 480p and Dolby Digital 5.1, trailers for Satisfaction, Bates Motel, Blackhat, Fifty Shades of Grey, Seventh Son, and The Man With the Iron Fists 2, plus all of the bonus features included on the Blu-ray edition.

The Boy Next Door is a preposterous thriller that takes itself way too seriously, so much so that it’s not even a fun “bad” movie. The video is exceptional, with above average audio, and a nice set of extras. The curious may want to rent first.

I miss high school...knowing which students were sleeping with which teachers...

Take out the "thriller/stalker" and you have a miscast Adore.