A struggling German family copes with the environmental dangers of Nazi Germany, World War II, and perils of their own making in Brian Percival’s The Book Thief, a brilliant domestic slice-of-life saga. With an impeccable cast and expertly recreated locations that take us back seventy years in the blink of an eye, The Book Thief is that rare film about ordinary people behaving sometimes extraordinarily in going about day-to-day living amid the challenges and terrors of the times in which they’ve been thrust. You won’t see a more heartrending movie that genuinely earns its tears of joy and loss than this one. 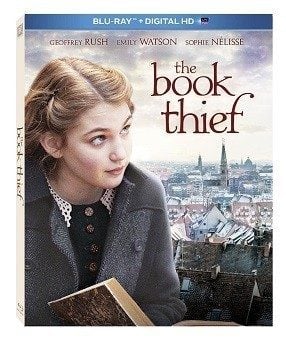 Liesel Meminger (Sophie Nélisse) comes to live with a foster family in a small village in Germany in 1938 where she’s given over by her Communist-leaning mother to kindly Hans Hubermann (Geoffrey Rush) and his demanding wife Rosa (Emily Watson). Though Liesel is illiterate, Hans makes learning to read a game with the ten-year old, and soon she’s eager to read anything she can get her hands on, even taking time from her chores of delivering laundry to the Buergermeister’s wife, Frau Hermann (Barbara Auer), to sit and read books from their vast library. But as Nazi law sweeps brutally across the land, book burnings are common (Liesel steals a charred book from the ashes afterwards), and the Hubermanns (not being Nazi sympathizers) risk their own lives by taking in Jewish Max Vandenburg (Ben Schnetzer) and hiding him in their basement. But as the Second World War rages on, everyone is affected: Hans is conscripted, Liesel’s best school friend Rudy (Nico Liersch) is recruited for elite training in the Hitler Youth, and air raids become more frequent and more deadly.Unusually narrated by Death (voiced by Roger Allam) who wafts over hill and dale at the beginning of the movie and who claims a number of prominent characters before we get to the film’s coda, the film boasts a screenplay by Michael Petroni based on the best-selling novel by Markus Zusak. The film revels in the beauties of words and the simple joys of living that even the scourge of Nazism can’t completely destroy. Director Brian Percival stages delightfully small but meaningful scenes that have real impact: a snowball fight in the basement where Max hides for two years brings the outdoors inside for him for a brief moment, and there are two memorable sequences involving air raids, the first where the townsfolk are all underground in a shelter (Hans Hubermann provides a distraction from the terror with sprightly tunes on his accordion) while Max takes the opportunity to creep outside from his hiding place to see the stars for the first time in years and the second when an older Liesel weaves a spell with the townsfolk by relating a ghost story for their edification. It’s small, wonderful sequences like these that give the movie such a heartfelt impact. But it’s not all niceties: the book burning sequence is as horrific as one would imagine, and a procession of Jews being led through town bullied onward by their brutal Nazi supervisors also involves Liesel being caught up in the tragedy.The producers’ decision to allow talented actress Sophie Nélisse to act the role of Liesel from ages ten through seventeen works just a tad against them since she doesn’t quite manage to pull off the span of years convincingly (though she comes far closer than Nico Liersch’s Rudy who must span about five years but never stops looking like a little boy even with an otherwise entertaining portrayal). Nevertheless, though, she gives a terrific performance matched every step of the way by Geoffrey Rush’s loving, thoughtful father and Emily Watson’s caustic (though agreeably thawing over the years) mother. Ben Schnetzer is an ingratiating, most appealing Max who even with far fewer amounts of screen time ingeniously makes the audience come to care for him and long for his safe passage once he leaves the roost.

The film is offered in its theatrical 2.40:1 aspect ratio in 1080p resolution using the AVC codec. Sharpness is very good but possibly not always quite as sharp as in the best transfers. Color is nicely handled throughout (the reds of the Nazi flags are especially vibrant) with accurate skin tones. Black levels are very good but not quite optimal. The few bits of German which are translated into white subtitles are very easy to read. The film has been divided into 36 chapters.

The DTS-HD Master Audio 5.1 sound mix handles the ambiance of the times quite well with the Nazi rallies and the bombings coming through especially impactfully in the various surround channels. John Williams’ exquisite score gets lovely placement in the fronts and rears, and dialogue is always discernible and has been placed in the center channel.

A wonderfully literate, humane transcription of a best-selling book, The Book Thief will transport its viewers back in time and introduce them to a gallery of unforgettable characters. The Blu-ray offers outstanding picture and sound and a couple of worthwhile bonus features. Highly recommended!

My wife Peg and I watched this a couple of nights ago and enjoyed it immensely.

It kept our attention from stem to stern. In particular, we were vexed trying to determine the voice of the narrator (not the actor who did the narration, but the character's voice). It turned out, of course, to be death.

There were some excellent performances in this film as well as a solid screenplay. And having John Williams involved never hurts!

The LFE kicked-in big time during the bombing sequences.

Excellent review, Matt. You touched on all salient points. This is a very nice film.

I ordered this during the one-day Fox Connect sale, and it should be arriving any day now. I'm glad to see the positive review!

I forgot this was Fox(I don't pay attention to which studio did what)...

I did pick up Out of The Furnace though...and a few 50s...
You must log in or register to reply here.