Just in time for Earth Day 2013, the first of the BBC’s “planet” documentaries finally comes to Blu-ray with a faithful, if not necessarily crowd pleasing, high definition presentation. Though the program’s natural history content holds up tremendously after 12 years, its 16mm film-based images can seem a bit long in the tooth after seeing the hyperreality of its more recently produced sequels. Still, those who aren’t impressed by the often profound spectacle captured by Blue Planet’s cameras should probably question their priorities. 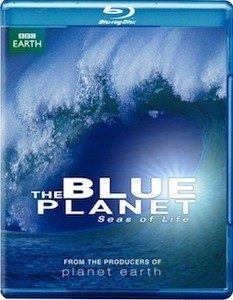 If you don’t know the (decidedly English) name Alastair Fothergill, you should know his work. For over a decade he’s been the executive producer of the BBC Natural History Unit’s (NHU) most high profile and groundbreaking “planet” documentaries, first with The Blue Planet in 2001, then Planet Earth in 2006, and finally Frozen Planet in 2011. As the first nature documentary to be recorded entirely in high definition, Planet Earth tends to get the most recognition, but The Blue Planet - ambitiously conceived as a “complete natural history of the oceans” - is no slouch. Featuring the narration of charismatic naturalist David Attenborough alongside often astonishing and even moving images, Blue Planet sets a standard of excellence that the subsequent Planet programs carry forward, making it an obvious precursor, but also its own rare achievement in filmmaking.And it was indeed filmmaking in the mid-90s and early-2000s. Since Planet Earth pioneered the use of high definition cameras for nature films, subsequent productions have basically abandoned celluloid as a medium. Consequently we’ve grown accustomed to a certain technical and aesthetic standard that makes it tempting to judge the images in The Blue Planet a bit unfairly, captured as they were on 16mm film stock with bits of standard and early high definition video thrown in here and there. The events documented still speak volumes (the brutal orca attack on a grey whale calf is forever burned in my memory), but for many the spectacle will feel diminished without the startling clarity and hyperreality of high definition acquisition. I think that’s fair though - after all, there’s a reason the BBC has made high definition its standard and re-deployed production crews to events like the annual sardine run / predator feeding frenzy off the South African coast. But at the same time, viewers should be aware of the technology that was available to the Blue Planet filmmakers and adjust their expectations accordingly.Since the last Planet program in 2011, Fothergill continues to wear the producers hat at the BBC NHU, but he’s also been working with Disneynature on feature documentaries like African Cats and Chimpanzee. Still, nothing has quite compared to his Planet opuses, and likely won’t for some time. With the first of them finally available on Blu-ray, fans of this remarkable series of programs should now feel a satisfying sense of completion, if not anticipation for what Fothergill and the talented people behind the BBC NHU will bring us next.The Blue Planet: Seas of Life includes the eight episodes that aired on British television in 2001. Though the release bears the minor title revisions made for the American broadcast (the “Seas of Life” subtitle and the renaming of the first episode to “Ocean World”), the episode order follows the original British sequencing as well as retains the original Attenborough narration. Pierce Brosnan, who provided his voice for the American version that aired on Discovery Channel, remains relegated to an out-of-print DVD released in 2002.

Framed at 1.78:1, the 1080p, AVC-encoded image often looks great but has its share of limited resolution and limited color depth images, made all the more obvious after years of the super detailed, super rich chroma displayed in subsequent BBC Earth programs. On The Blue Planet, contrast, color and black levels all range from fine to impressive, depending on the material, which ranges from 16mm film to standard and early high definition video. However occasionally heavy grain and hazy images are stark reminders of what high definition technology has done for the documentary genre. That said, the transfer does appear faithful to the source elements, meaning there’s no over-manipulation of the footage to try to “modernize” the look of the program. Though it means the series looks a bit long in the tooth as a result, the content holds up as some of the best nature images ever captured, making the question of the technology behind it somewhat irrelevant. After a time, the viewer will be too enthralled by the ocean’s profound beauty and spectacle to really care.

Attenborough’s familiar dulcet tones come across beautifully in the English 5.1 DTS-HD Master Audio track. Despite the discrete channel presentation, there’s very subtle, even minimal, surround activity and likewise LFE, but the soundstage has a pleasing breadth and consistent depth and dynamic range. I noticed a few instances of static or crackling in the track, as well as a subtle sort of skipping effect in the opening titles of each episode, but the problems are momentary and likely issues in the source elements.

Each episode includes a 10-minute “making of” featurette detailing the filming challenges and victories - information that can prove just as interesting as the primary content. The bonus material also includes special programs that aired on the BBC at other times, as well as interviews with the production crew. Overall it’s a solid collection of bonus material, though not quite as wide ranging as those found in other Planet releases.Making Waves: Documents the challenges and feats of photography for each of the eight episodes.InterviewsBonus Specials: Additional BBC nature programs related to bodies of water are presented in 1080p, AVC-encoded video and Dolby Digital Stereo audio, though picture quality can vary significantly.

The first of the groundbreaking Planet documentaries from Alastair Fothergill and the BBC Natural History Unit finally comes to Blu-ray with a faithful presentation of the original film-based project, a reminder to viewers that high definition was not always the de facto standard for nature programs. The special features are not quite as diverse as those found on the other Planet releases, but a look behind the scenes of each episode will satisfy those who have come to expect at least the inclusion of that material to supplement the main program. The title is recommended for both casual nature lovers and collectors looking to complete their high definition Planet trilogy.ADDENDUMA confession: I overlooked the fine print on the packaging that states, "The main feature has been upconverted from standard definition source material."Does that really change my evaluation of the video quality?Not especially.I knew the footage, especially if shot on standard definition video, would have its limits when presented in high definition and would require upconversion of some form. I did wonder if the transfer might be based on an old DVD master, but honestly there was little about the picture to make me think that (no doubt the program was mastered for standard definition broadcast in 2001, but that’s a very different thing from being mastered for DVD in 2001). Reviews on other sites have noted a myriad of issues from banding to macroblocking, but I tend to think they overstate the issue, as well as forget the fact whatever issues exist are inherent to the source material, not a transfer that presents it all in the best possible way. Of course, it would have been nice if the BBC had gone back and remastered the entire series, rescanning the original film elements and re-compositing the limited number of graphics and titles a la Star Trek: The Next Generation, but that’s obviously time and money the BBC wasn’t interested in expending.So what to do?Ultimately, my advice still stands. “Consider the source” when it comes to a program mastered in standard definition; don’t make unreasonable comparisons between it and programs produced over a decade later. If the principle of the thing still bothers you, then by all means hold off until the release hits a price that matches your tolerance level. But also try to see the product with your own eyes. More than likely it won’t look as bad as some have made it out to be.