“A woman’s place is in the home” is the old-fashioned homily that Satyajit Ray’s The Big City is exploding to smithereens. In this measured and meaningful melodrama, the writer-director molds a fascinating scenario for his star actress and despite contrivances and coincidences that could have been avoided, the film grips the viewer as he watches a house-bound wife step out on her own for the first time and like the feel of such independence. 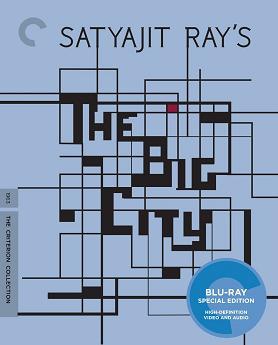 With finances frightfully thin due to their taking in Subrata Mazumdar’s (Anil Chatterjee) mother (Sefalika Devi) and father (Haren Chatterjee) and sister (Jaya Bhaduri) under their roof, wife Arati (Madhabi Mukherjee) decides to leave her household duties and apply for work. Despite the objections of her in-laws who have very conservative ideas of a woman’s place, Arati finds work as a door-to-door saleslady and racks up a fine sales record and glowing reports from her customers who appreciate her delicate, respectful ways. When Subrata loses his tenuous job at a bank which has gone under, Arati’s job becomes even more vital to the family now as she’s the only one bringing home much needed money. But Subrata’s pride takes a beating with this humiliation, and he and Arati begin to grow apart.Based on stories by Narbendanath Mitra, Ray’s screenplay is a trenchant look at the roles Indian women were expected to play and the changes that modern society was beginning to see happening in this long male-dominated culture. And Ray emphasizes the changes not only with her employment itself but in small touches like the lipstick and sunglasses she effects that give her an urban, hip look that very much suits her (it’s no wonder her boss is planning on an advanced position for her; she’s turned into a surprisingly natural and effective businesswoman). Ray’s use of his camera remains masterful as he squeezes many people into his frames using reflections and unusual positions, and his most impressive moment comes when Arati gets her first pay envelope with its salary and a bonus commission: the camera pauses to capture the emotions which fly across her face as she revels in her accomplishment. He handles other scenes with a decided amount of spark, too: the run on the bank is evocatively handled and Arati’s meeting with an old friend at a coffee shop while her husband hides in utter humiliation behind a newspaper hearing his wife’s bragging about his fictional work accomplishments is a most striking scene. Besides his satirical look at women’s subjugation, Ray also strikes a blow for underpaid teachers who watch their charges rise to great heights in business while they themselves work multiple jobs to avoid poverty (a subplot unvolving the bitter father-in-law who can’t come to terms with working his entire life and ending up with nothing but his students’ good will). If only Ray didn't have to rely on coincidences so much (the husband loses his job on the very day his wife has decided to resign; the boss offers to find the husband work on the day the wife has a falling out with her employer). These melodramatic moments seem forced and unworthy of the rest of the involving story.It’s certainly Madhabi Mukherjee’s picture all the way. We see her character evolve from her first tentative day as a saleslady to the strong, dynamic woman ready to take on the world by the end of the film. Anil Chatterjee certainly registers Subrata’s embarrassment brilliantly as his importance to the family’s survival fades next to his wife’s. As the wife's employer, Haradhan Banerjee makes a strong impression, and Vicky Redwood as an English-speaking fellow saleswoman whom Arati befriends also creates an indelible character. As the bitter father-in-law, Haren Chatterjee is quite touching.

The film has been framed at 1.33:1 and is presented in a 1080p transfer using the AVC codec. Even with its restoration, the images are not always consistently sharp nor is contrast always evenly applied. For the most part, the grayscale is excellent with strong whites and deep blacks, but there are scenes where things seem slightly off in the grayscale with less depth of field and more dated looking imagery. The white subtitles are very easy to read. The film has been divided into 23 chapters.

The PCM 1.0 (1.1 Mbps) sound mix features the combination Bengali language with English words and phrases constantly floating in and out of conversations. Dialogue is never compromised by the music or sound effects. But there is some hiss that comes and goes and some occasional attenuated crackle that might also distract once in a while.

Madhabi Mukherjee Interview (16:33, HD): the star of the film shares a few reminiscences but mainly recounts the plot of the movie in this 2013 interview.Sayajit Ray and the Modern Woman (22:25, HD): a video essay by film historian Suranjan Gangily which focuses on three Ray films from the 1960s which featured women in positions of economic and/or social power.Sayajit Ray (13:35, HD): a 1974 profile of the director by filmmaker B. D. Garga which mixes Ray’s own words about his love of directing with film clips and behind-the-scenes footage of the master at work.The Coward (1:08:48, HD): Sayajit Ray’s 1965 short feature involving a screenwriter (Soumitra Chatterjee) who accidentally is reunited with his long-lost love (Madhabi Mukherjee) now married to a tea plantation owner (Haradhan Banerjee) and his pleas for her to rekindle their relationship.32-Page Booklet: contains the cast and crew lists, movie stills and behind-the-scenes shots from the movie, professor Chandak Sengoopta’s look at women’s changing roles reflected in the movie, and Andrew Robinson’s interviews with Ray about The Big City and The Coward.Timeline: can be pulled up from the menu or by pushing the red button on the remote. It shows you your progress on the disc and the title of the chapter you’re now in. Additionally, two other buttons on the remote can place or remove bookmarks if you decide to stop viewing before reaching the end of the film or want to mark specific places for later reference.

Another of Sayajit Ray’s explorations of Indian society (though maybe with not as much character detail as can be found in some of his other works), The Big City offers very good video quality of the main film and the bonus of a second feature The Coward (which frankly looks better than The Big City) on the same disc. Recommended!